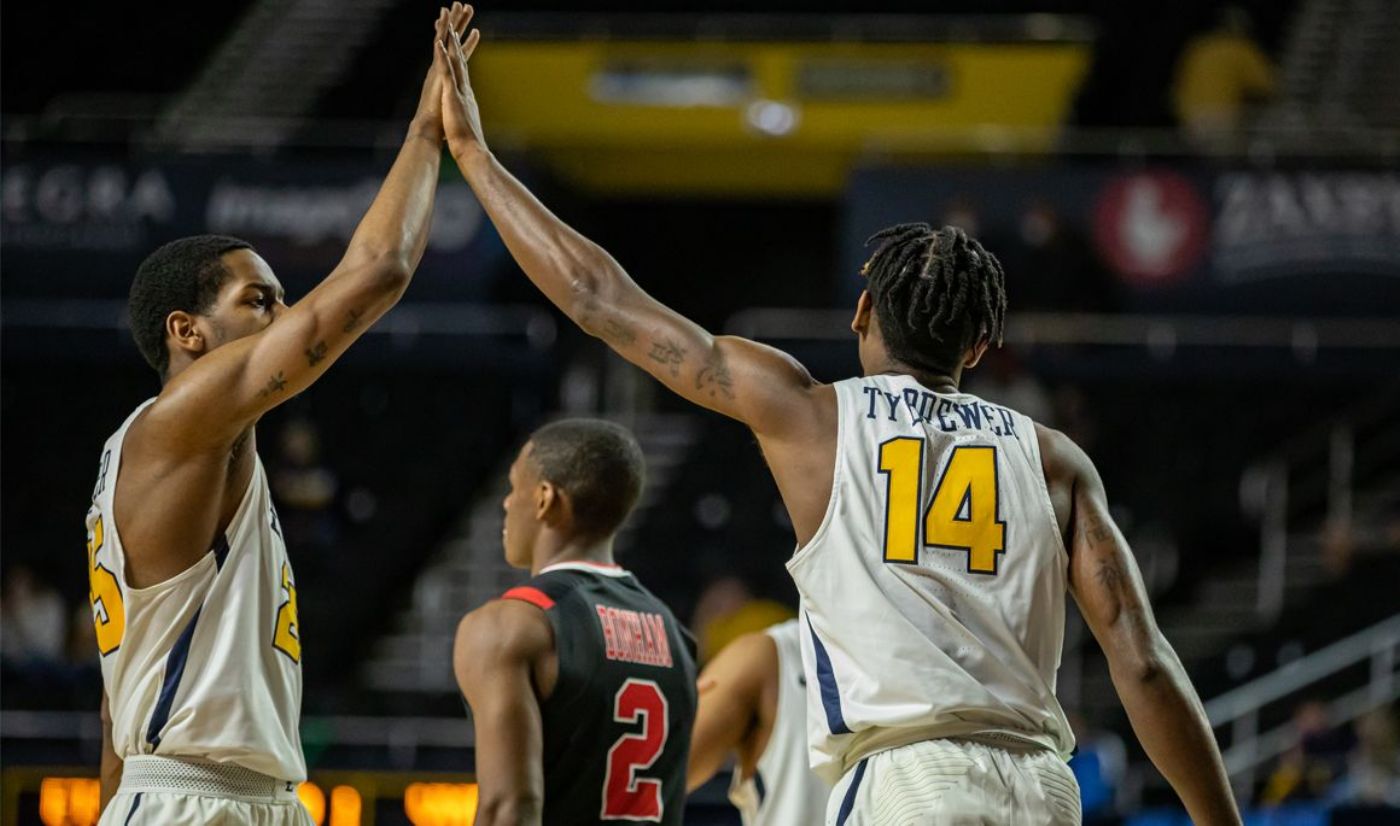 Despite getting off to a slow start, the ETSU men’s basketball team locked in defensively and got clutch second-half shooting from the Brewer Brothers, Ledarrius and Ty, as the Buccaneers secured the series sweep over Western Carolina with a 59-48 win on Wednesday inside the Ramsey Center.

The Bucs, who held Western Carolina 34 points below its season average, improved to 8-5 overall and 4-1 in SoCon play. Meanwhile, the streak continued as ETSU has now won 13 straight in the series, 30 of the last 31 and 14 in a row Cullowhee. The Catamounts suffered their first home loss of the season and dropped to 7-6, 0-4.

For the fifth time this season the Bucs held the opposition to 60 points or less, while the 48 points scored by the Catamounts marked their lowest output since scoring only 45 against Furman on Feb. 7, 2019.

After hitting a program-record 16 threes on Monday night, the Bucs only netted four makes from beyond the arc, along with shooting 39.3 percent overall from the field (22-56).

The Bucs were plus-5 on the glass (41-36), thanks to out-rebounding Western Carolina in the second half by 10, 26-16. ETSU only had one offensive rebound in the first half, but grabbed seven in the final 20 minutes to finish with eight second-chance points.

Redshirt junior Ledarrius Brewer (Meridian, Miss.) scored his 1,000th career point after finishing with a game-high 15 points (13 in the second half), moving his career total to 1,012 points. Brewer was forced to sit the final 15 minutes of the first half after picking up two fouls, but he made up for it in the second, as he was 6-of-12 from the field.

Ty Brewer (Meridian, Miss.) added 12 points and seven rebounds in 24 minutes off the bench, while David Sloan (Louisville, Ky.) scored 11 of his 12 points in the first half to go with five assists.

The Brewer Brothers, who combined for 45 points in last month’s win over the Catamounts, enjoyed a 10-plus minute stretch where they scored all 21 of the Bucs’ points. In the second half alone, Ty and Ledarrius combined for 23 of ETSU’s 32 points on 9-of-16 shooting.

Xavier Cork and Matt Halvorsen scored in double figures for the Catamounts. Cork led the team with 13 points and five rebounds and Halvorsen added 12 on 3-of-11 shooting from 3-point range. Mason Faulkner entered the night averaging 17.6 points and was held to nine on  4-of-13 shooting (0-4 from three).

Things couldn’t have started any worse for the Bucs as they missed seven of their first eight shots, while Ledarrius Brewer picked up two fouls in the opening five minutes and Western Carolina jumped out to a 12-2 lead. After the Blue and Gold were able to pull within six, the Catamounts pushed their lead back into double figures when Halvorsen sank a three to cap off seven unanswered points, making it 21-8 with just under eight minutes before halftime. Fortunately, the Bucs finally woke up and rattled off 13 straight points to pull even at 21, and they eventually grabbed their first lead at 25-23 when Sloan took a charge on the defensive end and hit a pull-up jumper at the 1:50 mark. After pushing the lead to three, Western Carolina scored the final four points of the frame to take a 28-27 lead into the locker room.

The Bucs, who missed 13 of their first 16 shots and first six attempts from beyond the arc, finished the final eight minutes of the frame on fire. ETSU made seven of its last 10 shots and three of four from beyond the arc to cut into the deficit. Sloan led all players with 11 points.

Western Carolina pushed its margin to five in the opening five minutes of the second half, but with the Catamounts up 36-31, the Bucs scored 10 of the next 12 points to regain a 41-38 lead following back-to-back free throws by Ty Brewer with 8:08 remaining. From there, ETSU never trailed despite Western Carolina pulling even at 45 after a three by Halvorsen, but Sloan found Ledarrius Brewer all alone in the corner for a triple on the next trip down the floor, making 48-45 with 4:11 to go. On their ensuing possession, the Catamounts scored on a lay-up to make it a one-point game, but ETSU closed the game on a 9-2 run to collect its 61st win in the series.

The Bucs held Western Carolina to 7-of-27 shooting in the second half, along with a 2-of-13 mark from 3-point land. Faulkner was limited to three points in the final 19 minutes of play, while the Brewer Brothers took over from the 12:40 mark to 2:09 left where they scored all 21 of ETSU’s points.