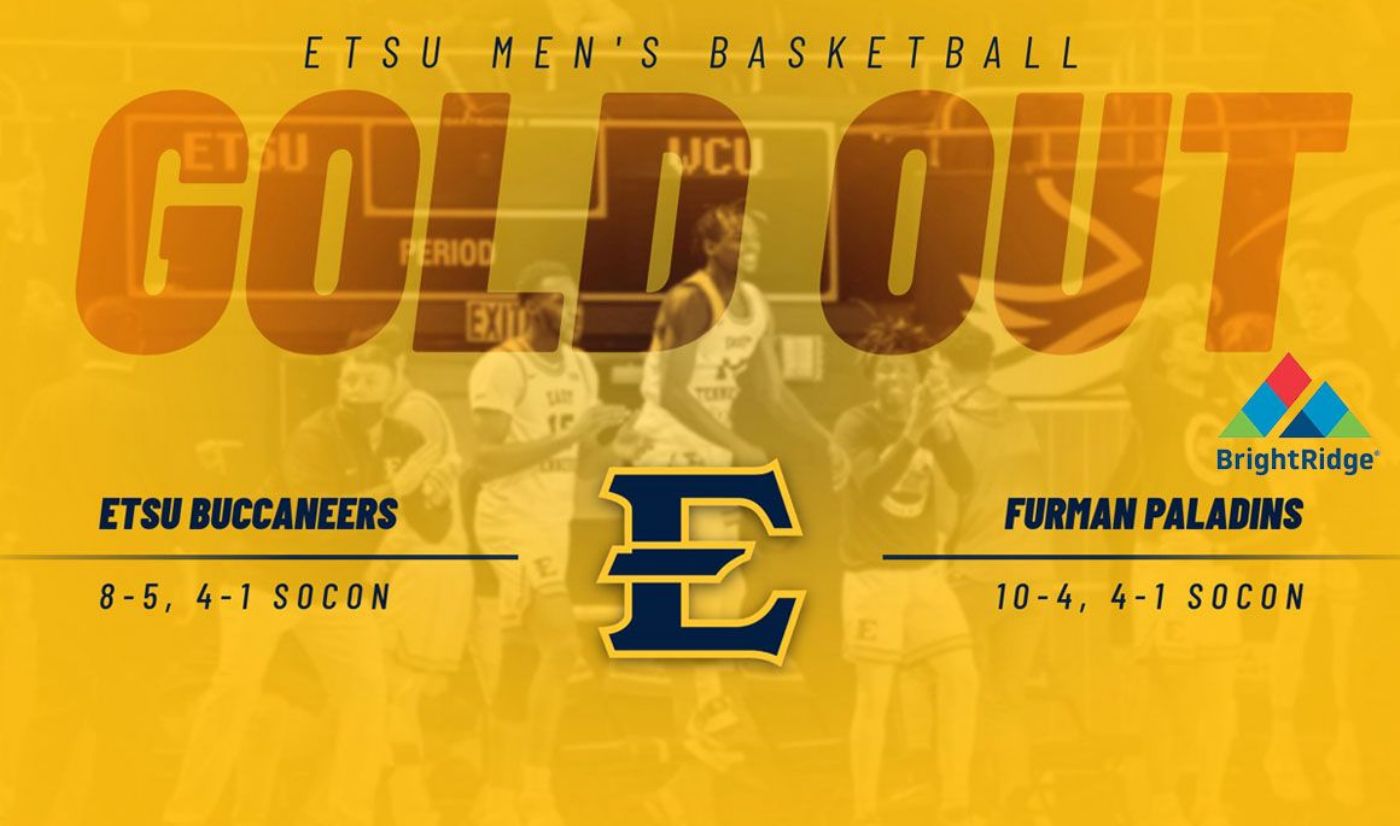 Bucs, Paladins set to square off for second time in a week

JOHNSON CITY, Tenn. (Jan. 22, 2021) – For the second straight weekend, ETSU and Furman will meet in a key Southern Conference showdown.

A week after suffering a 12-point setback to the Paladins in Greenville, the Buccaneers will look to return the favor, as the two 4-1 SoCon teams meet inside Freedom Hall Saturday at 4 p.m.

Saturday’s game will be streamed live on ESPN+ as Mike Gallagher and Bruce Tranbarger will be on the call; CLICK HERE FOR LIVE VIDEO

For the second time this season, ETSU is wearing its all gold uniforms on Saturday.  The qualifying season ticket holders who can attend the game are encouraged to wear gold ETSU apparel, while those who cannot attend the game should tweet their photos to @ETSU_MBB and @ETSUAthletics using #GoldOut to show their support for the Bucs.

ETSU has gone 72-13 (.847) inside Freedom Hall since the start of the 2015-16 season, including a 5-1 mark this year and a 16-1 record last year … Last season, the Bucs won their first 12 games inside Freedom Hall to start the season, matching the best open since the 2003-04 Bucs went 12-0 … ETSU’s 16 wins were tied for the ninth-most in the country last season as Rutgers led all teams with 18 and a group of seven schools (Gonzaga, Wichita State, Creighton, Oregon, Liberty and Louisville) were tied with 17 … The 16 home wins by the Bucs were also the most in program history in the modern era (since 1960).

ETSU, FURMAN MEET FOR SECOND TIME IN A WEEK

ETSU and Furman will meet for the second time in a week as the Paladins won 78-66 last Saturday in Greenville, S.C. … The two contests were part of the original SoCon schedule, however, due to COVID rescheduling, the Bucs will wrap up their second straight SoCon series (Western Carolina & Furman) before playing Chattanooga (Jan. 27), The Citadel (Jan. 30), Samford (Feb. 1), Mercer (Feb. 3) and Wofford (Feb. 13) once.

Since the start of the 2015-16 campaign, ETSU has won the most games in the Southern Conference with 75 victories … Furman (70), UNCG (70) and Wofford (63) are the other top win leaders in league play during this span.

Damari Monsanto has been a beast on the boards as he’s totaled 27 rebounds over the last two games – 14 vs. VMI and 13 at Western Carolina … In his four game prior to these two games, Monsanto totaled 25 rebounds … Overall, Monsanto has grabbed at least five rebounds in 11 of the 13 games played this season and has seven or more rebounds in five games … Monsanto ranks fourth in conference with 8.6 rebounds in SoCon only  games and is tied for fifth in the league in overall rebounding (7.1) … His 14-rebound game is the fifth-highest by a SoCon player this season and tied for the most in a SoCon game.

Furman, 10-4 overall and 4-1 in the Southern Conference, is ranked No. 4 in this week's College Insider Mid-Major Top 25 and a SoCon-best No. 62 in the latest NCAA Evaluation Tool (NET) Rankings.

The Paladins fell out of first place in the league standings and had their five-game winning streak snapped with a 74-73 loss at VMI on Wednesday night. Alex Hunter converted on three free throw attempts with 9.1 seconds left to knot the game at 73-73, but Trey Bonham drew a foul with 3.2 left and connected on the first of his two trips to the line to lift the Keydets to the win.

Furman has not lost back-to-back games in SoCon play since falling to UNCG and Wofford on the road in January of 2019.

The Paladins, who are averaging 84.9 points and shooting 50 percent from the field, have three players scoring in double figures this season … Furman is led by Mike Bothwell’s 18.4 points per game, while Clay Mounce is posting 15.0 points and  Noah Gurley is averaging 14.1 points per game … Bothwell scored a career-high  32 points in last Saturday’s win over Bucs; however, Gurley was held scoreless for the first time in 55 games.

Furman won the first meeting one week ago as the Paladins handed 78-66 decision in Greenville … Since the Bucs returned to the league in 2014-15, neither team has swept the regular season series (last sweep was by ETSU in 1993-94; Furman's last sweep came in 1986-87).

Saturday is the 29th meeting played in Johnson City with ETSU going 17-12 in those contests, including winning six of the last seven and seven of the last 10.

The Bucs continue their homestand on Wednesday as ETSU takes on Chattanooga at 7 p.m. inside Freedom Hall.