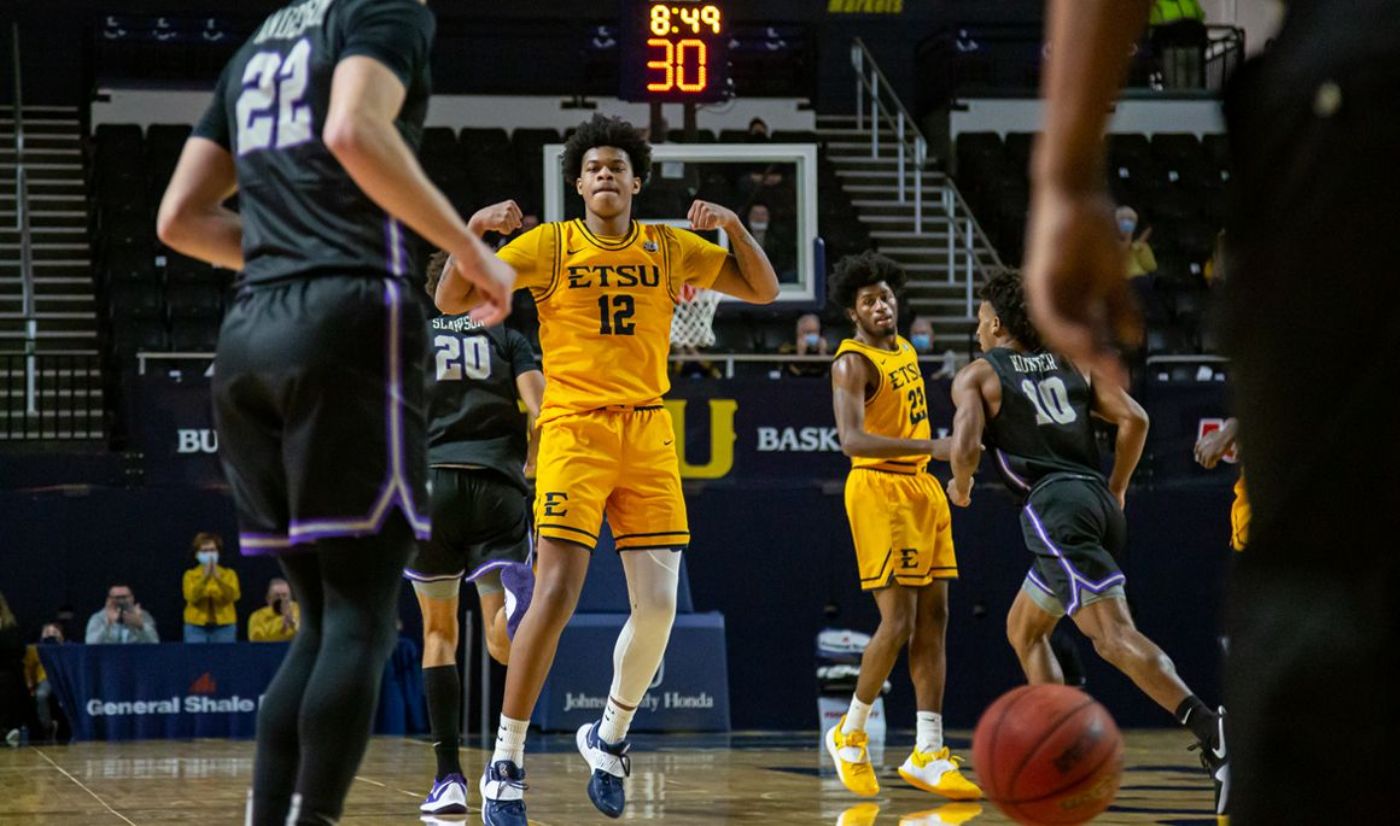 ETSU remains dominate at home in nine-point win over Paladins

JOHNSON CITY, Tenn. (Jan. 23, 2021) – A week after suffering its first Southern Conference loss of the season at Furman, the ETSU men’s basketball team didn’t have to wait long to return the favor.

ETSU has won eight of its last 10 games and improved to 9-5 overall and 5-1 in SoCon play after splitting the regular season series with the Paladins. Since the Bucs returned to the league in 2014-15, the two teams have split the series, while neither team has recorded a sweep since ETSU accomplished the feat during the 1993-94 season.

Saturday was the 63rd all-time meeting between the two SoCon leaders with ETSU moving the advantage to 33-30, while the Bucs improved to 18-12 overall in Johnson City and have won eight of the last 11 at home over the Paladins.

Once again, the Buccaneer defense was the storyline as Furman entered the contest averaging 84.9 points per game and were held 23 points below its average.  The 62 points also marked Furman’s lowest output of the year. The Paladins, who were shooting 50 percent on the season, posted a 41.7 clip (25-60) from the field and shot 25.8 percent from beyond the arc (8-31).

ETSU finished 44.4 percent from the floor (24-54), while making double-digit threes for the second time in three games as they went 10-of-24 from beyond the arc. The Blue and Gold were also plus-9 at the free throw line with ETSU going 13-of-18 and Furman finishing 4-of-7.

The Bucs were solid yet again on the glass – outrebounding the visitors from Greenville, S.C. by eight (38-30) – and had a plus-10 advantage in second-chance scoring, 17 to 7.

ETSU’s bench also had the upper-hand as they outscored the Paladins by 14,  18-4.

Furman, who dropped back-to-back SoCon games for the first time since January 2019, moved to 10-5 overall and 4-2 in league play.

The Bucs got off to a strong start as they made five of their first 10 shots to go up 16-6, following Monsanto’s third three-pointer at the 12:32 mark. Furman landed the next punch as they finally found some rhythm offensively and forced the Bucs into five turnovers over a five-minute stretch en route to posting a 13-4 run to pull within one, 20-19, with just under seven minutes remaining. The Paladins made their run with Ledarrius Brewer on the bench with two fouls, but ETSU rolled the dice by putting its leading scorer on the floor and the Blue and Gold pushed their lead back to nine after Monsanto stayed perfect from beyond the arc by hitting his fourth triple, making it 28-19 with 5:06 remaining. Unfortunately, the Bucs went cold as they were held to two points in final five minutes and Furman used a 10-2 run to make it a one point game at the break, 30-29.

Monsanto led all players with 12 points on 4-of-4 shooting from 3-point range in the half, while Gurley – who was held scoreless in the first meeting – led Furman with 11. The Paladins were plus-12 paint scoring, 20-8, while ETSU was plus-3 in three-point shooting, 6-3.

ETSU’s scoring drought carried over into the second half as Furman registered the first five points and grabbed its largest lead of the night at 34-30.  From there, the Paladins led by three as Mike Bothwell laid one in with just under 15 minutes to play, forcing the Bucs to call timeout.

The stoppage worked as ETSU clamped down defensively and held Furman without a field goal for over eight minutes and built a 10-point lead, 52-42, following a second-chance opportunity by Monsanto with 8:48 remaining. The Paladins finally made their first field goal since the 14:58 mark when a three by Mounce made it a seven-point game, while Bothwell hit another triple to cut the Furman deficit to four, 52-48, with 5:44 showing on the clock.

Monsanto stopped the momentum by drilling his sixth and final three of the night on ETSU’s ensuing possession, while Ledarrius Brewer’s personal 6-0 run pushed the Bucs’ lead to 13, 63-50, with 2:27 remaining. Brewer started the surge with a three-pointer, then jumped the passing lane for a steal, threw down a monstrous dunk in transition and was fouled to complete the old-fashioned three-point play. That stretch proved to be the dagger as Furman never had an answer and the Bucs came out victorious.

The Bucs continue their homestand Wednesday night when Chattanooga visits Freedom Hall for a 7 p.m. tip.