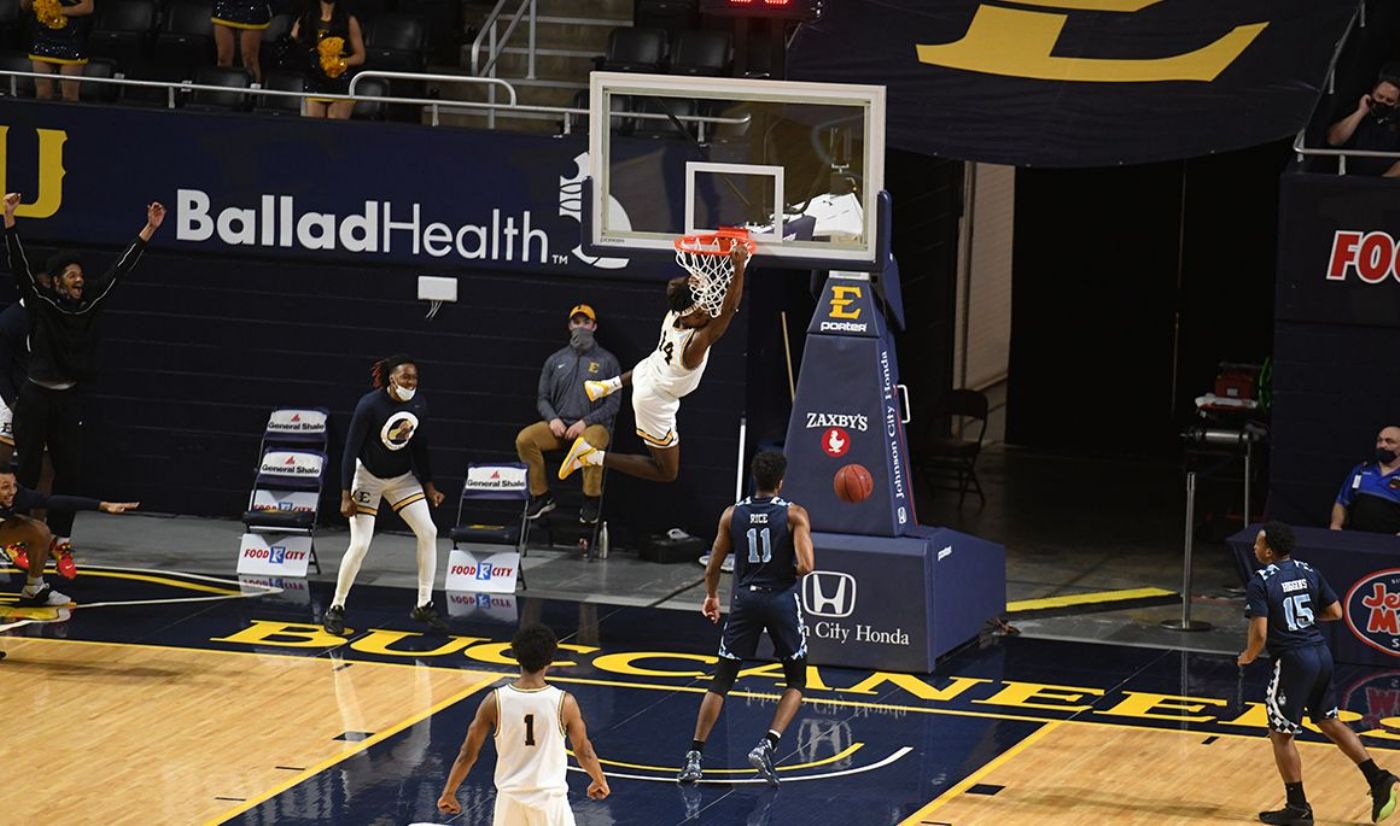 JOHNSON CITY, Tenn. (Jan. 30, 2021) – Typically it’s been the Buccaneer defense grabbing the headlines. That all changed on Saturday.

Five Buccaneers scored in double figures, including three posting 20 or more points, as the ETSU men’s basketball team cruised its way to a 112-84 rout over The Citadel inside Freedom Hall.

ETSU kept its grip on the Southern Conference lead as the Bucs improved to 10-5 overall and 6-1 in league play. The Blue and Gold have now won four straight, nine of their last 11 and seven in a row inside the friendly confines of Freedom Hall.

Since the start of the 2015-16 season, ETSU has scored 90 or more points 34 points – eight of those games have come against The Citadel.

The Bucs scored at least 50 points in both halves on Saturday, including an astonishing 62 in the second half, marking the most points in a half since netting 64 against Detroit on Nov.  14, 2016.

For the sixth time this season and third in the last four games, the Bucs knocked down double-digit threes.

The Buccaneer bench also generated 42 points as 12 different players reached the scoring column, including Morrell Schramm (Cleveland, Tenn.) and Sadaidriene Hall (Sulphur Springs, Texas) registering their first collegiate points. Schramm knocked down a three-pointer with 2:03 remaining, while Hall – who just joined the team on Monday – scored the final two points on a jumper in the final minute of the contest.

ETSU set or tied season highs in points scored, points in a half, field goals made, free throws made and free throw attempts.

The Citadel, who just knocked off Wofford on Wednesday, dipped to 9-5 overall and 2-5 in SoCon play. The Bucs have won five straight in the series, 11 of the last 13 and hold an all-time lead over the Bulldogs, 46-17.

Three Bucs scored at least 20 points with junior Serrel Smith (St. Petersburg, Fla.) netting a career-high 21 points on 7-of-9 shooting (3-4 from three). Smith led the Blue and Gold early by accounting for nine of their first 13 points and 17 of the first 32.

Redshirt freshman Damari Monsanto (Pembroke Pines, Fla.) notched his second career double-double as he finished with 20 points and 13 rebounds. Monsanto was efficient in the 12 second-half minutes played as he totaled 15 points and seven boards.

Like Monsanto, Ty Brewer (Meridian, Miss.) also scored 15 second-half points en route to finishing with 18, four rebounds and two steals. Brewer had a stretch from the 6:10 to the 3:34 mark of the second half where he scored 11 points, including three SportsCenter Top 10 dunks – the final being a windmill – making it a 105-77 score.

Senior David Sloan (Louisville, Ky.) pitched in with 10 points and dished out six of the Bucs’ 16 assists.

The Citadel was led by Hayden Brown’s 21-point effort.

The Bucs, who led from wire-to-wire, scored the first eight points before the Bulldogs rattled off eight of the next 10 to make it 10-8 early on in the contest. The game continued to remain tight but with ETSU ahead by one, the Bucs used a 16-6 run over a 5-minute stretch to build an 11-point lead, 32-21, following a pair of free throws by Smith at the 7:22 mark. From there, the closest the Bulldogs got for the remainder of the night was six and ETSU took a 50-43 lead into the break.

Despite making one more field goal and shooting over 50 percent in the opening 20 minutes, The Citadel still found itself on the wrong end of the score. The difference maker was free throw shooting as ETSU was plus-9 at the charity stripe in the first half, 18-9. Both teams made six threes, while Smith (17 points), Ledarrius Brewer and Sloan accounted for 37 of ETSU’s points. Brewer and Sloan each had 10 in the frame.

The Bucs wasted little time pushing their margin back into double figures coming out of the locker room as Monsanto fed Ty Brewer for a fast-break lay-up, making it 56-46, with just over 18 minutes left in the game. The Bulldogs clipped the deficit to nine on two different possessions, but a 17-5 Buccaneer surge saw their lead balloon to 21 after Richard Amaefule (London, United Kingdom) made a nice move in the paint for the bucket, making it 75-54 with 13 minutes remaining.

The game was never in doubt and the Blue and Gold started having more fun – culminating with Ty Brewer’s 11-point stretch which included the three monster slams – making it 105-77 with 3:34 showing on the clock. ETSU eventually led by as many as 32 thanks to Schramm’s three as it pushed the score to 110-78.

ETSU hits the road for two straight games starting Monday night at Wofford. Tip-off is set for 7 p.m. inside Richardson Indoor Stadium.  The Bucs lead the Terriers by one game in the league standings.