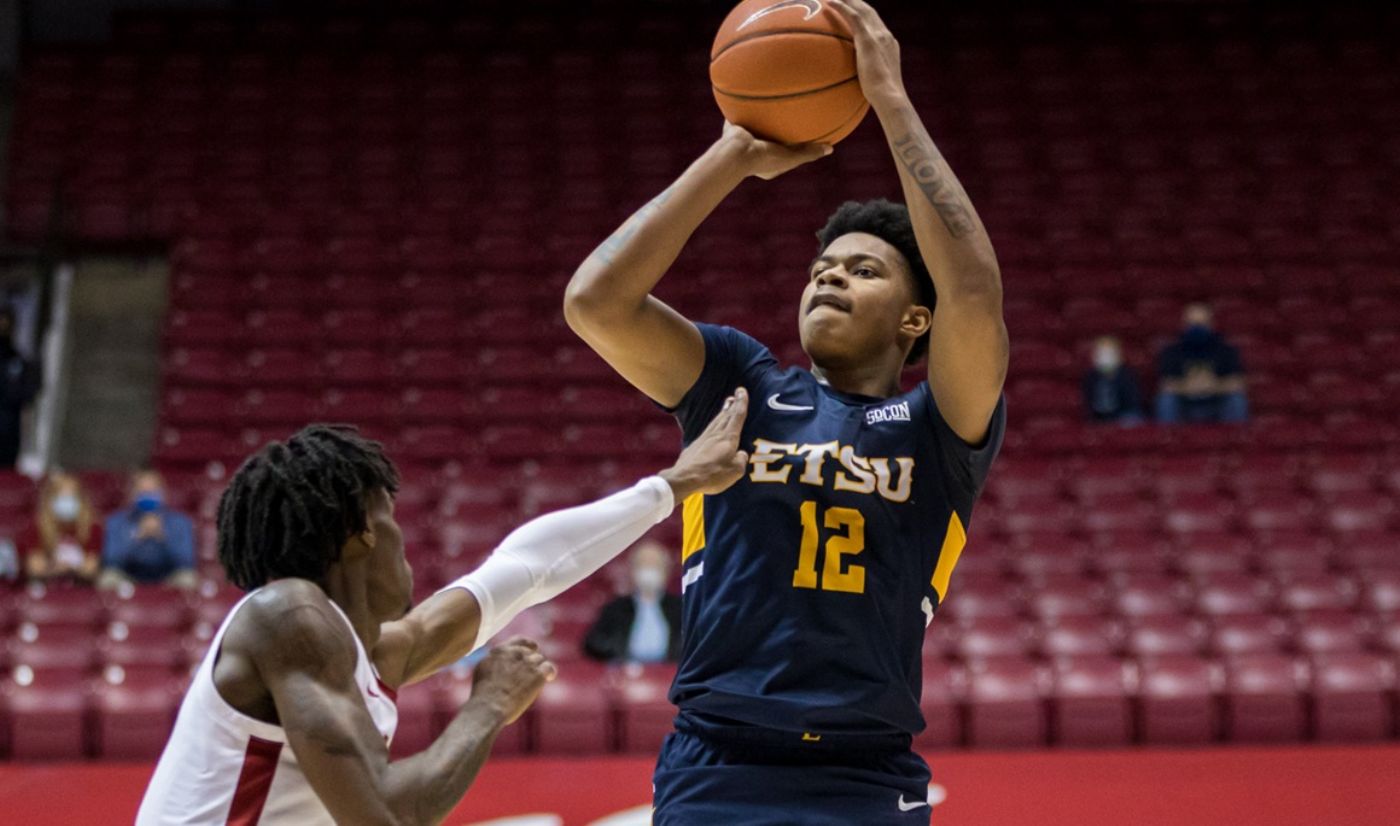 SPARTANBURG, S.C. (Feb. 1, 2021) –  After seeing five guys score in double figures in Saturday’s win over The Citadel, the ETSU men’s basketball team only had one show up on Monday.

Damari Monsanto (Pembroke Pines, Fla.) netted a career-high 24 points but it wasn’t enough to carry the Buccaneers to a road win at Wofford, as the Buccaneers fell 67-62 inside Richardson Indoor Stadium.

In a game that featured the last two Southern Conference champions, the Bucs had their four-game win streak snapped as ETSU dropped to 10-6, 6-2. Meanwhile, Wofford improved to 11-5, 8-2.

The stat lines for both teams were nearly identical except for the shooting percentages. Wofford made two more field goals but managed to shoot 51 percent (25-49) thanks to hitting at a 61 percent clip in the second half. The Terriers also knocked down 12 threes and made five free throws. ETSU shot 40 percent from the floor (23-57), while making 11 triples and five of its six at the charity stripe.

The Bucs led by as many as 15 points in the first half before Wofford scored 15 unanswered to take its first lead of the game at the 2:08 mark of the opening frame.

Prior to the game, ETSU cracked its way into the CollegeInsider.com Mid-Major Top 25 as they were No. 19.

Monsanto posted his second straight 20-point scoring game and third of the season as he led all players with 24 points. The freshman guard was 8-of-12 from the field and 6-of-9 from 3-point range, along with grabbing eight rebounds.

The Bucs’ next leading scorer was Ledarrius Brewer (Meridian, Miss.) – who came into the night averaging 19 points in conference play – but finished with eight points on 3-of-11 shooting.

Senior  Vonnie Patterson (Louisville, Ky.) scored all seven of his points in the second half, while grabbing five rebounds and swiping two steals.

The opening 20 minutes was a game of runs, and unfortunately for the Bucs, Wofford withstood the first punch and responded with one of its own.

ETSU couldn’t have scripted a better start as they made eight of its first 13 shots and eventually built a 15-point lead, when Ty Brewer (Meridian, Miss.) grabbed an offensive board and laid one in, making it 24-9 with just under 10 minutes left in the half.

However, after the Bucs defense held Wofford scoreless for eight minutes, the Terriers got hot and rattled off 15 straight points to capture their first lead of the night, 27-26. David Sloan (Louisville, Ky.) finally stopped the run and ETSU’s 6-minute scoring drought by draining a deep three at the 1:34 mark and the Bucs took a 31-30 lead into the break.

Monsanto led all players with 13 points in the half as he was 5-of-7 from the field and knocked down three of his four attempts from beyond the arc.

The opening six minutes were nip-and-tuck, but with the score knotted at 41, the Bucs rattled off six straight points as Patterson converted the old-fashioned three-point-play and Sloan hit Ty Brewer in the corner for a three, making it 47-41 with 12:29 remaining.

The lead quickly evaporated as Wofford knocked down a pair of threes to even things back up, but after both teams traded baskets, momentum shifted when the Terriers used a 9-0 run to open a 58-51 lead at the 5:24 mark.

After being held scoreless in the half, Monsanto ignited a spark by hitting a pair of threes, making it 58-57 with just over three minutes to play. Wofford stopped the run when Murphy connected on a jumper, but Monsanto was fouled on the next trip down  and sank both free throws.

Unfortunately, after getting a defensive stop, the Bucs were unable to regain the lead as Silas Adheke (Lagos, Nigeria) missed a jumper in the paint and Wofford’s B.J. Mack stepped up with two critical shots. With the shot clock winding down, Mack nailed a three, and after forcing a turnover, he made a jumper, putting the Terriers up six with 37 seconds to play. As time dwindled down Wofford held on for the five-point win.

The Bucs conclude their two-game road swing Wednesday night at Mercer. Tip-off is set for 7 p.m.