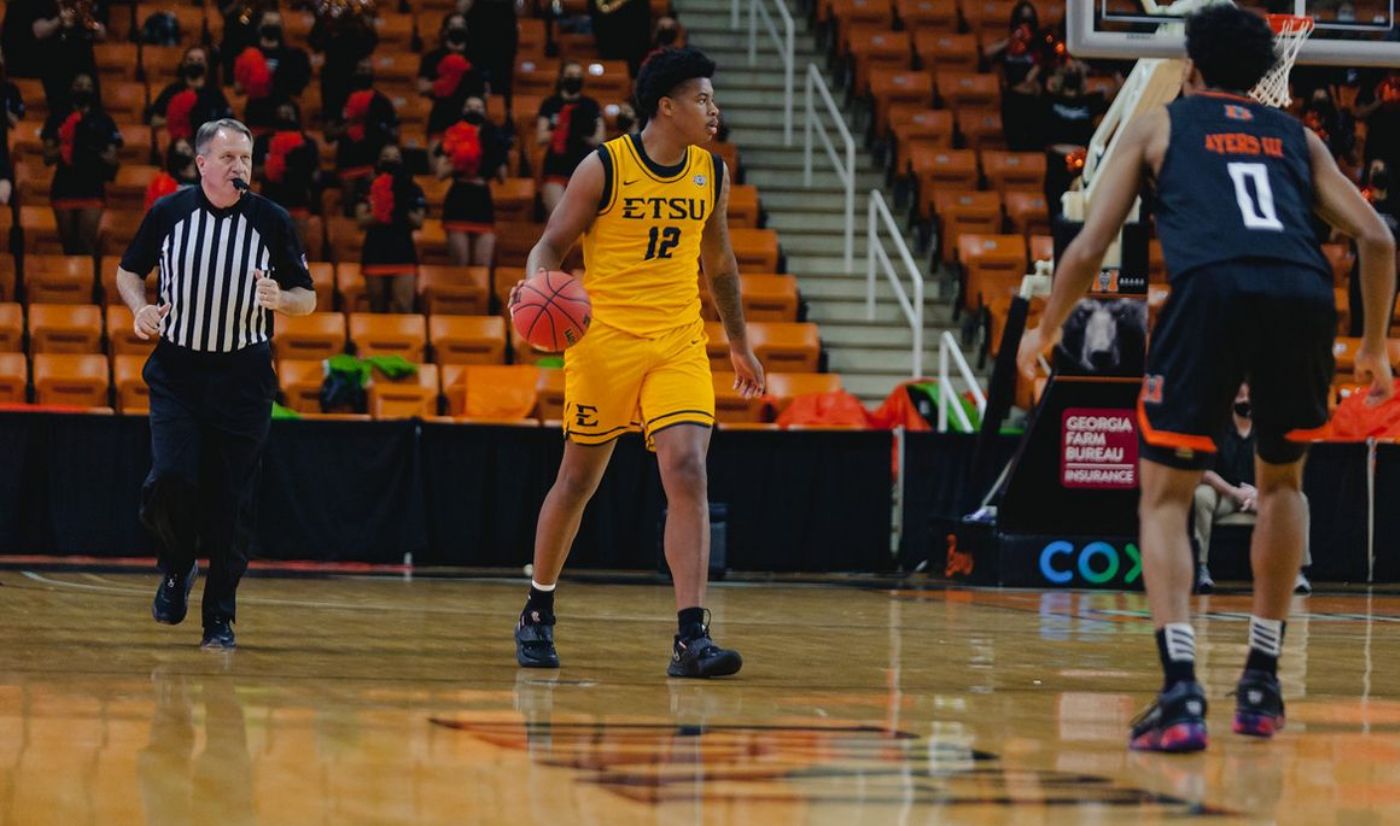 MACON, Ga. (Feb. 3, 2021) –  Facing an eight-point halftime deficit, the ETSU men’s basketball team had its back against the wall.

Fortunately, for the Blue and Gold, they responded to head coach Jason Shay’s challenge.

Led by double-doubles from Damari Monsanto (Pembroke Pines, Fla.) and Silas Adheke (Lagos, Nigeria), the Buccaneers used a second-half surge to rally for a 70-64 victory over Mercer on Wednesday night inside Hawkins Arena.

“I told the team at halftime, ‘they could either quit or fight,’” said Shay, whose Bucs moved a half-game out of first-place in the Southern Conference standings following VMI’s overtime win at Wofford. “We showed great fight in the second half and were able to get the job done.”

The Bucs outscored Mercer 38-24 in the second half, including a 17-3 run to erase an eight-point deficit and take 63-57 lead thanks to a David Sloan (Louisville, Ky.) three-pointer as the shot clock was counting down with 3:35 remaining.

Both teams made eight free throws but managed to shoot below 62 percent on the night.

The Bucs were plus-9 in fastbreak scoring, 16-7, while ETSU finished with only eight turnovers, marking the second time in the last three games ETSU had less than 10.

For the sixth straight game, ETSU won the battle on the boards as the Bucs were plus-3, 32-29. Thirty-six of the Bucs’ points were scored in the paint.

Monsanto, who registered his fourth straight 20-point scoring game, tied a career-high with 24 points and added 10 rebounds for his third double-double. Monsanto was unconscious in the second half – scoring 19 points on 7-of-9 shooting (3-5 from three) and grabbing seven rebounds. For the game, Monsanto was 9-of-14 from the field and connected on four of the Bucs’ six makes from beyond the  arc. The redshirt freshman guard is the first Buccaneer player to have four straight 20-point scoring games since Ge’Lawn Guyn posted five straight from Feb. 20-March 6, 2016.

Adheke posted his second double-double of the year (third career) as he tallied 11 points and 10 rebounds to go with two blocks and one steal.

Monsanto and Adheke became the first Buccaneer duo to record a double-double in the same game since Lucas N’Guessan (12 points/12 rebounds) and Davien Williamson (14 points/10 assists) did so last Feb. 5, 2020 at Chattanooga.

Sloan was the final Buc player to reach double figures in scoring as he netted 14 points and grabbed three rebounds.

Mercer, who had five guys averaging double figures in scoring on the season, was led by Neftali Alvarez and Leon Ayers III as they combined for 30 points on 12-of-20 shooting. Alvarez had a team-high 17 points and four assists, while Ayers added 13 points. The rest of the team went 12-of-32.

It was a similar story as Monday night’s game at Wofford with the Blue and Gold starting strong and then went cold.

The Bucs showed a balanced offensive attack early as eight different players scored in the opening 10 minutes, but with ETSU ahead by seven, a shooting funk set in. The Bucs went scoreless for over five minutes and Mercer rattled off 10 straight points, while closing the final 4:15 on a 12-2 run en route to taking a 40-32 lead into the break.

Mercer shot 52 percent in the half – and after making eight of its first 14 shots – the Bucs finished the frame 5-of-16, posting a 43 percent clip from the field.

After being challenged at the break, Monsanto led the comeback as he scored the first eight points of the stanza – coming in a 2-minute, 16-second spurt – pulling ETSU even at 40. Mercer responded with a 14-6 run to go up by eight with 12:14 to play, but the Bucs flexed their muscle and locked in defensively.

Over the next eight-plus minutes, ETSU mounted its 17-3 run to regain a 63-57 lead with 3:35 showing on the clock. The trio of Monsanto, Sloan and Adheke fueled the surge. Monsanto and Sloan each scored seven points and Adheke added three. Overall, the Bucs made six of their 10 shots during the blitzkrieg with Sloan capping it off with the clutch three-pointer with just over three and half minutes to play.

The Bears cut it to three two different times, but with ETSU leading 67-64, Monsanto came down with his ninth rebound on a missed three by Ledarrius Brewer (Meridian, Miss.) and connected on an off-balanced lay-up to put the Blue and Gold up by five with 25 seconds to go. Following a Mercer timeout, the Bears missed a three-point attempt and Monsanto pulled down his 10th board to seal the road win.