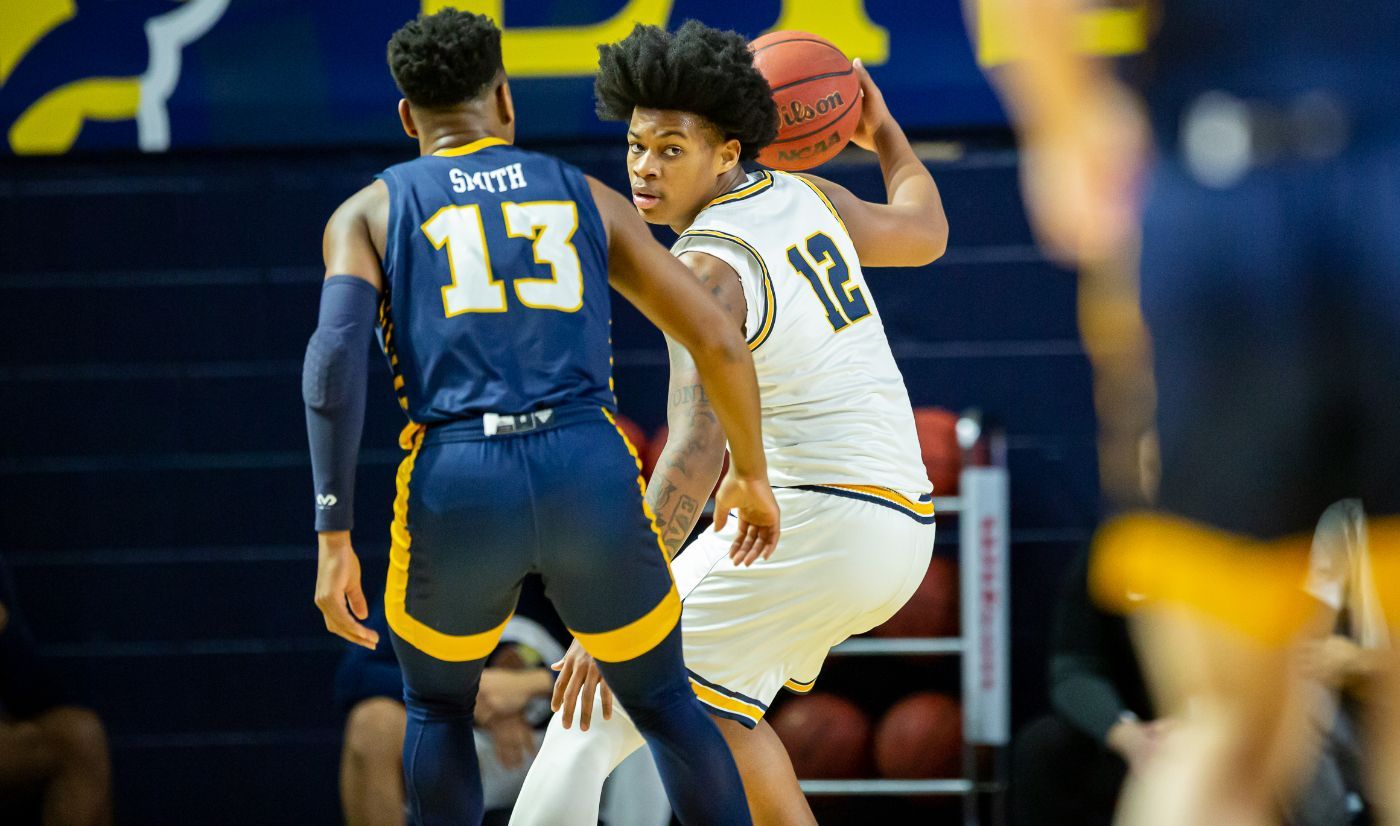 However, Chattanooga’s A.J. Caldwell got the last laugh. Caldwell knocked down a three-pointer with one second remaining, carrying the Mocs to a 67-65 victory over ETSU on Saturday evening inside Freedom Hall.

After trailing the entire game, Brewer’s three-pointer from the right wing gave the Bucs their only lead of the night with 11.9 seconds left. Following an ETSU timeout, the Mocs had time to set up the final play, resulting in Malachi Smith passing it off to Caldwell who took one dribble and got off the 24-footer with two defenders on him for his only made field goal of the game. The Bucs had a desperation half-court heave at the buzzer but it was off the mark.

ETSU saw a pair of streaks snapped Saturday night as they dropped to 11-7 overall and 7-3 in SoCon play. The Bucs, who had won the last seven games inside Freedom Hall, also saw their 10-game win streak over Chattanooga end.

Chattanooga won its second straight game en route to improving to 14-5 overall and 5-5 in conference play. The Mocs’ win was the first over ETSU since claiming the SoCon Championship on March 7, 2016, while it was their first win in Johnson City since Feb. 13, 2016.

Saturday was the 92nd all-time meeting between the two programs with Chattanooga now pushing its lead in the series to 48-44, while 33 games have been decided by five points or less.

Despite making 12 threes and shooting 52 percent from long distance, the Bucs couldn’t shrug off a sluggish start where the Mocs scored 15 of the first 18 points. Overall, ETSU shot 45 percent for the contest and made nine of its 13 attempts at the charity stripe.

The Mocs were slightly better at 46 percent from the floor, while they were 8-of-21 from three and 7-of-11 at the line.

Turnovers proved to be critical as the Bucs turned it over 12 times to only five by the Mocs, resulting in a 12-5 advantage in points off turnovers for the visitors.

For the fifth straight game, redshirt freshman Damari Monsanto (Pembroke Pines, Fla.) scored over 20 points as he netted 13 of his game-high 22 in the second half. Monsanto knocked down five threes and also grabbed seven rebounds.

Monsanto is the first ETSU player to register five straight 20-point scoring games since Ge’Lawn Guyn did so from Feb. 20-March 6, 2016.

David Sloan (Louisville, Ky.) scored in double figures for the second straight game as he totaled 14 points on 5-of-8 shooting (3-4 from three) and dished out eight of the Bucs’ 13 assists.

Chattanooga had three players score in double figures as David Jean-Baptiste, Darius Banks and Smith combined for 50 of the 67 points. Jean-Baptiste and Smith each scored 18 and Banks added 14.

The Bucs got off to a sluggish start but eventually gained some momentum as they cut a 13-point deficit to six at the break, 33-27.

ETSU missed its first three shots and had two turnovers in the opening four minutes as Chattanooga jumped out to a 7-0 lead. The Bucs’ sloppy play continued and the Mocs extended their lead to 12, 15-3, with 12:20 left in the half. From there, Chattanooga took its largest lead of the half at 21-8, but with the Bucs down 10 with just under five minutes to go before halftime, ETSU finally woke up. ETSU used an 8-2 run to pull within four and the third triple by Monsanto in the final minutes made it a three-point affair; however, Jean-Baptiste’s three in the final seconds sent the Mocs into the locker room up six.

Monsanto, who missed his first four shots and pair of free throws, made three of his final four attempts – all three-pointers – to end the half with nine points. As a team, ETSU opened 1-of-7 from the floor, but finished 8-for-14, to go 10-for-21 for the half. The Mocs were 14-for-30 in the opening 20 minutes. The Bucs coughed the all up eight times in the frame, resulting in seven points for Chattanooga.

The Bucs didn’t carry any of the momentum with them into the start of the second half as Chattanooga scored eight of the first 10 points to push its lead back into double figures, 41-29,  at the 17:31 mark. After ETSU was able to cut it to an eight-point game, the Mocs pushed things back into double figures and eventually led by as many as 16, when Smith converted on the old-fashioned three-point-play, making it 58-42 with just under seven minutes to play.

Chattanooga pushed its lead back to eight with 2:25 remaining, but again, ETSU didn’t back down.

The Bucs scored 11 of the next 13 – capped by Brewer’s triple – giving ETSU its only lead of the night at 65-64 with 11.9 remaining. But just like Casey Jones in 2015, Caldwell provided the late-game heroics to give the Mocs the two-point win.

ETSU hits the road Wednesday night to take on The Citadel at 7 p.m.