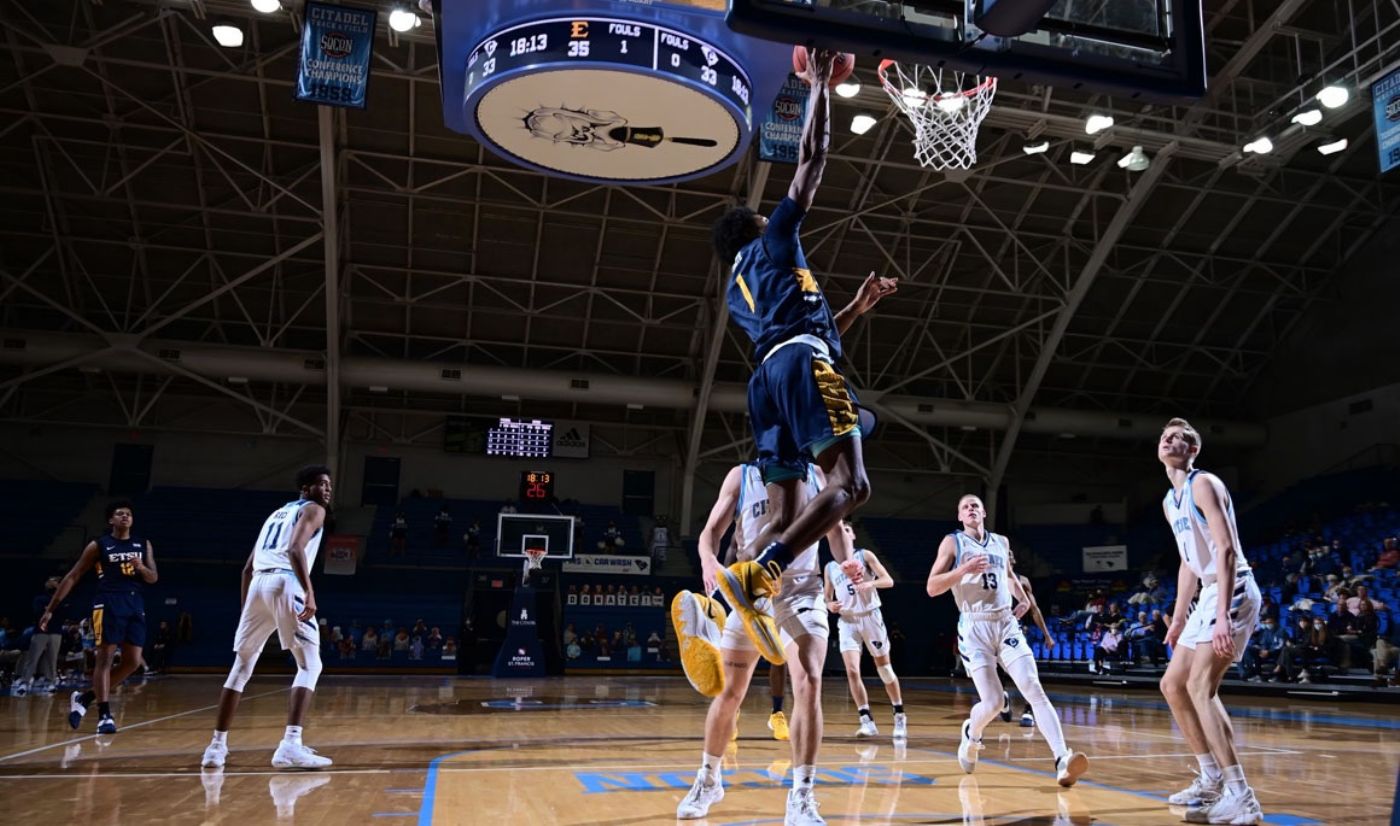 Less than two weeks after hitting the century mark against The Citadel at home, the ETSU men’s basketball team couldn’t repeat the offensive onslaught in Charleston.

With the Bucs’ leading scorer in conference play being held scoreless, the Bulldogs used a strong second-half effort to rally for a 79-71 win on Wednesday night inside McAlister Field House.

Despite holding the Bulldogs five threes below their season average, the Bucs allowed The Citadel to shoot 49 percent from the floor (28-57), while going 8-for-26 from beyond the arc. The Bucs, who shot over 50 percent in last month’s win, took 73 shots tonight and only made 28 of those attempts (38 percent), while also only connecting on 8 of 25 from three.

After going to the free throw line 30 times in the home win, ETSU went 7-of-9 at the stripe Wednesday night, compared to The Citadel posting a 15-of-21 mark.

The Bucs were out-rebounded by three, 41-38, with the Bulldogs converting eight offensive rebounds into 13 second-chance points.

ETSU only forced the Bulldogs into 11 turnovers, while The Citadel assisted on 21 of its 28 made field goals. The Bucs turned the ball over seven times and had 12 assists on 28 makes.

The Citadel outscored ETSU 48-38 in the second half.

Three Bucs scored in double figures with Ledarrius Brewer (Meridian, Miss.) leading the way with 21 points. Vonnie Patterson (Louisville, Ky.) scored the first five points for the Blue and Gold and finished with 13, while David Sloan (Louisville, Ky.) accounted for 15 of the Bucs’ 21 bench points.

Redshirt freshman guard Damari Monsanto (Pembroke Pines, Fla.) entered the night averaging over 22 points per game in his last five outings, but he was held scoreless for the first time of his collegiate career. Monsanto, who had posted five straight 20-point scoring games, was 0-for-7 from the field and grabbed eight rebounds.

The opening 10 minutes were tightly contested with neither team leading by more than four, but with the score knotted at 16, the Bulldogs rattled off seven straight scores to take a 23-16 lead at the 7:37 mark. Fortunately, the Bucs closed the half strong as they mounted a 17-8 run to take a 33-31 lead into the break. ETSU got hot from beyond the arc as they hit three of its last four, including back-to-back makes from Ledarrius Brewer and Serrel Smith (St. Petersburg, Fla.) to ignite the run. Ty Brewer (Meridian, Miss.) ended the half with his only triple of the night to give the Bucs the two-point advantage.

The Bucs went ahead by four in the early stages of the second half thanks to Patterson connecting on his second three of the contest – but after ETSU went up 49-46 following a made free throw by Charlie Weber (Owings, Md.) with 13:35 remaining – things quickly unraveled for the Blue and Gold.

ETSU chipped away at its deficit and eventually pulled within two when Sloan found Ledarrius Brewer for a three, making it 68-66 with 4:29 showing on the clock.

However, each time the Bucs inched closer, The Citadel responded.

The Bulldogs scored the next five points to go back up seven and ETSU never had an answer.

The Blue and Gold return home Saturday when ETSU hosts Wofford at 4 p.m. inside Freedom Hall.