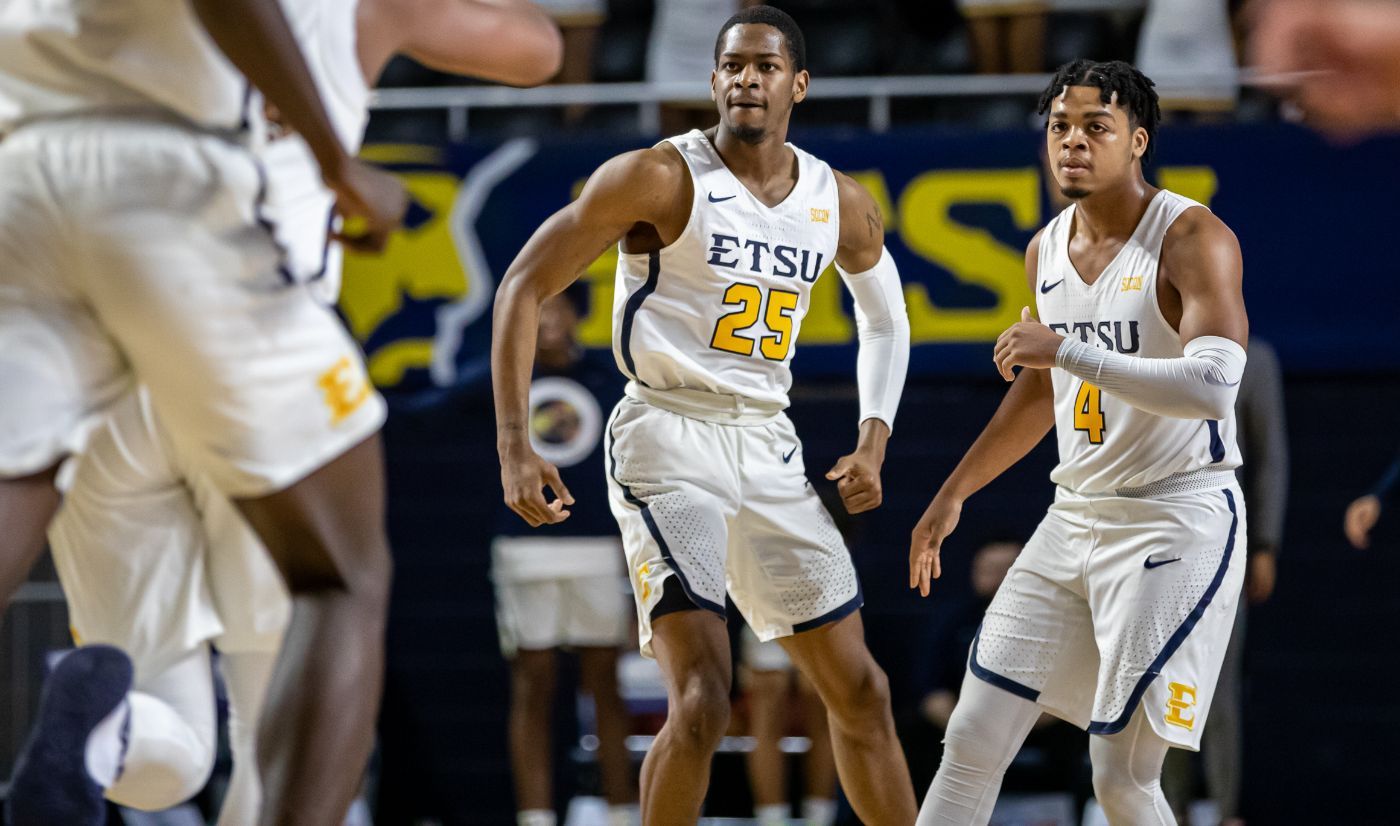 The Buccaneer duo combined for 46 points, with Brewer scoring a season-high 30 as the ETSU men’s basketball team snapped a two-game skid by defeating Wofford, 71-49, on Saturday evening inside Freedom Hall.

“After watching the film from The Citadel game, it was astounding how selfish we were,” said Shay. “I showed the team that we had at least 10 possessions where we had zero passes. That’s not moving the defense and it makes things more difficult to make shots, because teams will say ‘ETSU doesn’t pass, they’re 1-on-1 and selfish.’ Teams will just load up the paint, protect the basket and make us take bad shots. I put in set where we had to pass the ball and every person had to have a touch. I made some adjustments and we learned, and Ledarrius was the recipient of that. He got us going early. He was the spark plug for us and I went to him late to close it out.”

With the win, ETSU improved to 12-8 overall and 8-4 in SoCon play, keeping them one game back in the loss column with leading UNCG – who the Bucs close out the regular season with at home on Feb. 27.

ETSU held Wofford to its second-lowest point total of the season as the Terriers shot 34 percent (17-50) from the floor and 25 percent (8-25) from beyond the arc – also their second-lowest shooting percentage from 3-point range this season.

The Blue and Gold scored 20 points off 16 Wofford turnovers, and despite only totaling five offensive rebounds, ETSU cashed those into nine second-chance points.

ETSU excelled at the charity stripe as they shot 83 percent (15-18), marking the sixth time this season the Bucs shot over 80 percent at the line.

The Bucs enjoyed their third wire-to-wire win this season as ETSU scored 10 of the first 11 points of the contest and never looked back.

Wofford suffered its second straight loss and dipped to 12-8, 9-5.

The Bucs, who avenged a 5-point loss to the Terriers earlier this month, dealt Wofford its worst loss in the series since ETSU’s 106-77 thrashing back on Dec. 4, 1993.

Brewer, who was 11-of-14 from the field and 6-of-9 from beyond the arc, registered the second 30-point scoring game of his collegiate career. The Meridian, Miss. native scored a career-high 34 points against Eastern Illinois while he was at Southeast Missouri State back on Feb. 15, 2018.

Brewer’s six threes were a season high and the 11 made field goals tied a career mark. Brewer extended his streak of making at least one three-pointer to 18 consecutive games and he has made multiple triples in 46 career outings.

Sloan, who was inserted back into the starting lineup, rattled off 16 points and five assists. The senior point guard was 5-of-10 from the floor and made all four of his free throws.

The Buccaneer duo combined for 46 points on 16 of 24 shooting, along with seven rebounds.

Damari Monsanto (Pembroke Pines, Fla.), who was coming off the first scoreless game of his career, finished with eight points – including a stretch where he scored six over a 1-minute, 28-second span in the second half. Monsanto also corralled six rebounds.

Storm Murphy was the lone Terrier to score in double figures as he was held to 11 points, seven points below his season average. Murphy was 4-of-10 from the field and 3-of-9 from beyond the arc.

The Bucs sprinted out of the gates as they hit five of their first eight shots and grabbed a 13-3 lead after Ledarrius Brewer knocked down his third three-pointer six minutes into the contest. Despite cooling off from its hot start, ETSU was able to get the Terriers into foul trouble and extended the lead to 13, 28-15, thanks to a pair of free throws by Brewer with just under four  minutes to play. However, the Bucs were held scoreless for the final 3:53 of the stanza and Wofford used a 6-0 run to pull within seven at the half, 28-21.

After its strong start, the Bucs missed 12 of their last 16 shots of the half to finish with a 38 percent shooting clip (9-24). Four of ETSU’s nine made field goals came from beyond the arc with Brewer knocking down three to pace all scorers with 13 points.

Wofford scored the first points of the second half to make it a five-point game, but that’s as close as they would get.

Following Morgan Safford’s layup in the opening 30 seconds, the Bucs went on a 13-0 run, pushing its lead to 18 thanks to Charlie Weber (Owings, Md.) converting on the old-fashioned  three-point-play, making it 41-23 with 14:47 remaining.

The Terriers clipped their deficit to 11, but then the wheels fell off as Messiah Jones was called for a Flagrant 1, which then led to Coach McAuley being charged with a technical foul. Sloan made all four free throws and assisted on a Ledarrius Brewer three, capping off the mini 7-0 run and giving the Bucs a 56-38 advantage.

From there the rout was on as ETSU cleared the bench and eventually grabbed its largest lead of the night when a jumper by Truth Harris (Mount Vernon, N.Y.) made it 71-47 with just under two minutes to play.

ETSU heads back on the road Monday night as the Bucs face Chattanooga at 7 p.m.