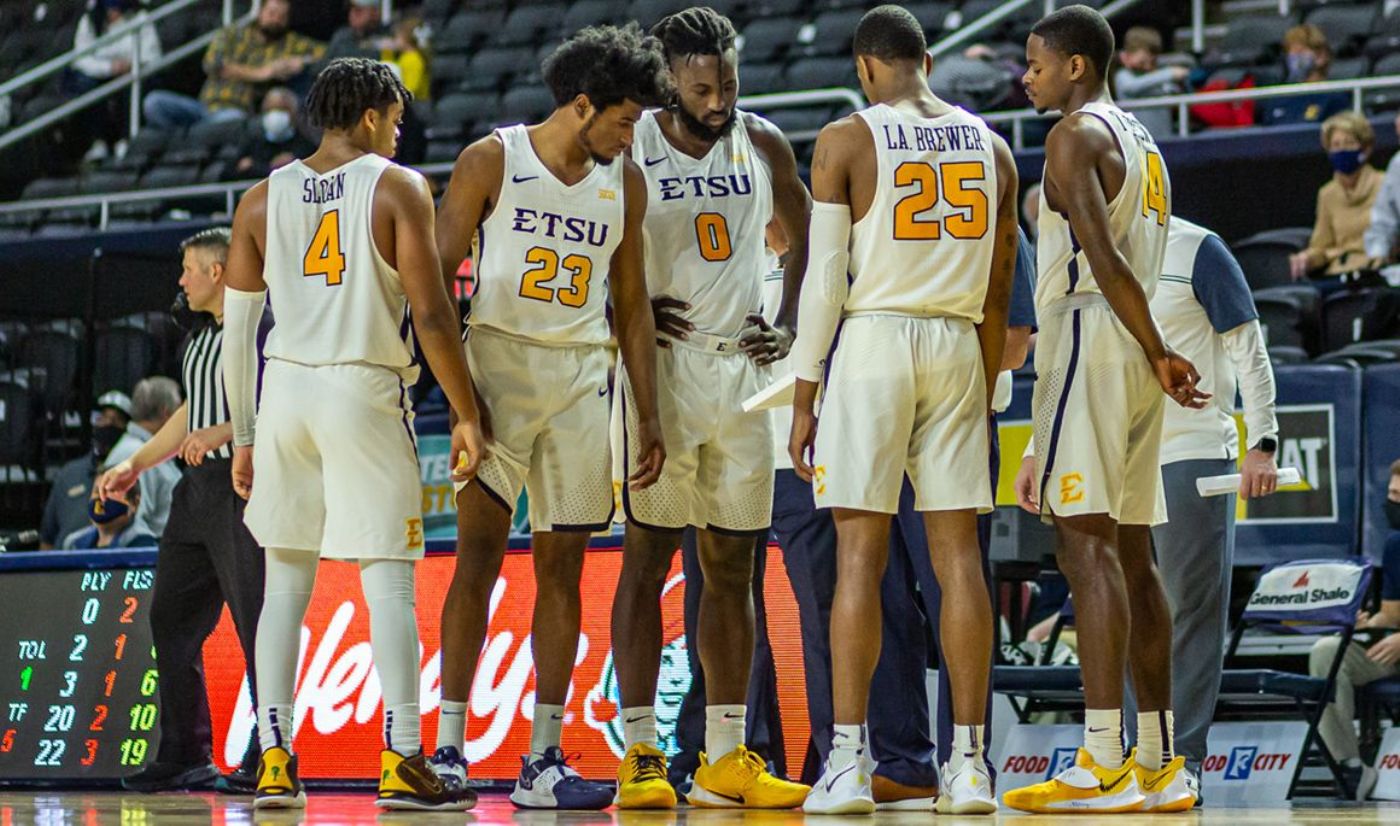 JOHNSON CITY, Tenn. (Feb. 17, 2021) –  For the second straight year, Mercer had the upper hand against the Bucs inside Freedom Hall.

The ETSU men’s basketball team was held to just three points in the final four minutes as Mercer used a late run to defeat the Blue and Gold 71-64 on Wednesday night.

Since the calendar flipped to February, the Bucs have lost five of their last seven and dropped to 12-10 overall and 8-6 in SoCon play. Mercer, who won for just the 10th time in 35 tries against ETSU, improved to 13-8, 6-7.

The Bucs scored 25 points off 19 Mercer turnovers; however, the Bears capitalized on just the 10 ETSU miscues – scoring 20 points.

Mercer was plus-11 on the glass, 31-20, with ETSU only totaling four offensive rebounds.

The Blue and Gold finished with 12 steals on the night, which were tied for the second-most this year.

Serrel Smith (St. Petersburg, Fla.) and Ledarrius Brewer (Meridian, Miss.) paced the Bucs with 16 points each. Smith was 6-of-7 from the field and scored 14 first-half points.

Smith single-handedly kept the Bucs in it early in the first half as he hit his first five shots, accounting for 12 of ETSU’s first 16 points with ETSU only trailing by three 10 minutes into the contest. After Vonnie Patterson (Louisville, Ky.) forced a steal and fed Ledarrius Brewer for the fast-break lay-up to pull within one, the Bears then mounted a 9-2 run to extend their lead to eight, 30-22 with just under four minutes left in the frame. ETSU answered with eight unanswered points to even it at 30, but Mercer scored five of the last eight points to take a 35-33 lead into the break.

Coming out of halftime, the Bears scored the first six points, but the Bucs flipped the switch by using a 12-3 run to take a 45-44 lead following two made free throws by Ty Brewer at the 12:20 mark.

Neither team was able to break away as there were three ties and nine lead changes in the final 12 minutes of the contest.

ETSU took its largest lead at 49-46 with 10:38 to play, but each team had an answer. Jeff Gary connected on a three to pull even at 49 and took a two-point lead following a dunk from James Glisson III with 8:47 remaining.

The Bucs went back ahead thanks to Sloan’s three-pointer with just under seven minutes to go, making it 56-55, but Mercer regained the lead when Cummings found Haase open for another triple at the 5:09 mark.

Ledarrius Brewer gave the Blue and Gold their final lead at 61-60 as he laid one home with 3:54 showing on the clock – but after the Buccaneer defense got a stop – Ty Brewer missed a baseline jumper on the next trip down and ETSU was unable to grab momentum. Following the final media timeout, Alvarez fed Glisson III for the go-ahead bucket at the 3:06 mark, resulting in the final lead change of the night. After the Bucs had two possessions to retake the lead, Cummings nailed his second three-pointer and Mercer made its final six free throws to seal its sixth road win of the year.

ETSU embarks on long two-game road swing which takes the Bucs to Samford on Saturday at 8 p.m. ET, followed by a ride up I-81 to VMI next Wednesday.