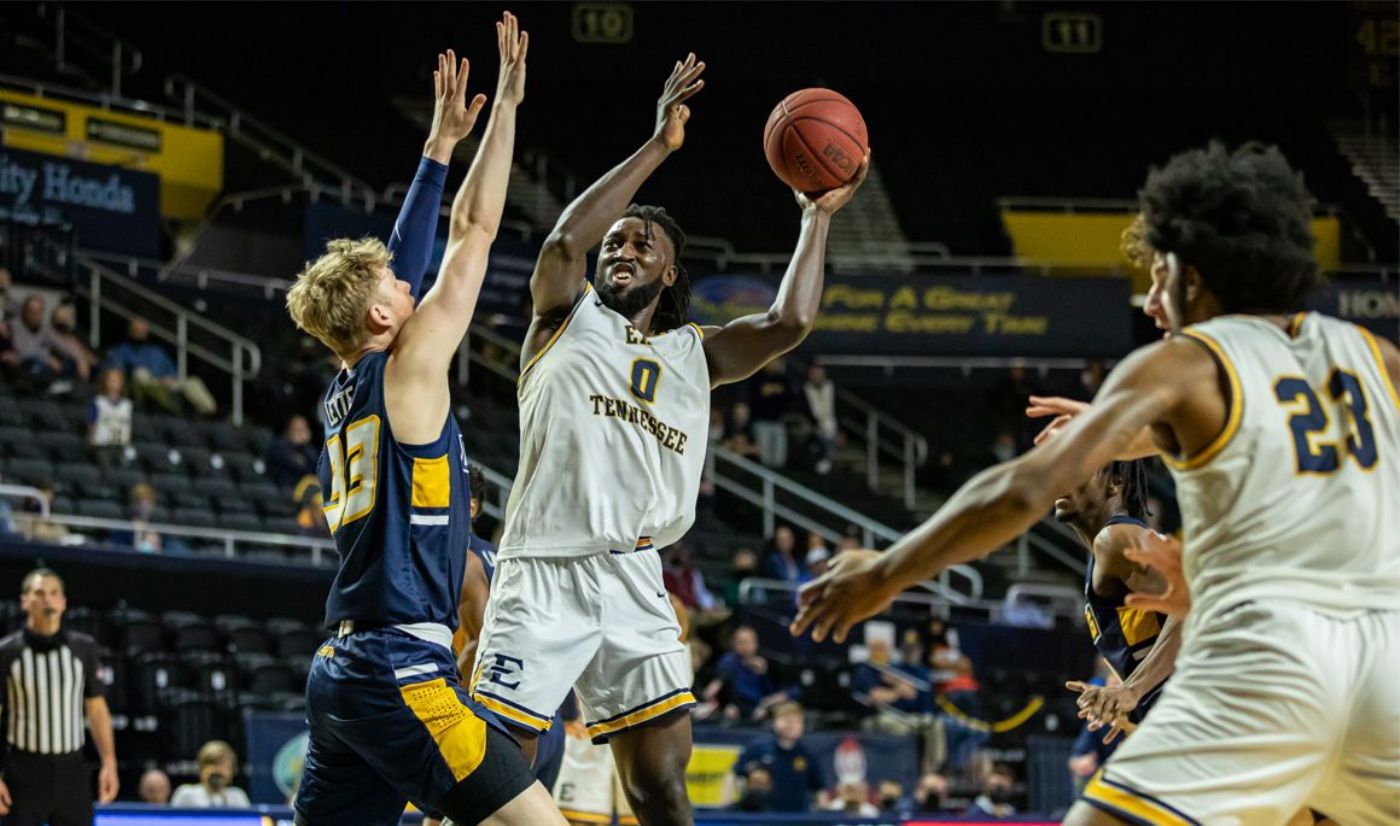 After the Bucs missed a chance to win it in regulation and scored the first three points in overtime, UNCG outscored the Buccaneers, 16-2, and went on to win 85-74 in the regular season finale inside Freedom Hall.

The Bucs, who were playing their first game since Feb. 17, suffered a sixth setback in the last eight games, dipping to 12-11 overall and 8-7 in conference play. Meanwhile, UNCG – coming off a one-point home loss to Western Carolina on Wednesday night – improved to 18-8, 13-5. The Spartans also clinched the regular season championship thanks to Wofford defeating Furman on Saturday night in Spartanburg, S.C.

In a tightly contested game that featured 19 lead changes and 16 ties, the Bucs were unable to snap the 69-69 tie in regulation, as Ledarrius Brewer’s (Meridian, Miss.) contested, deep, fade-away three-pointer as time expired hit off the backboard and bounced off the rim as the buzzer sounded, resulting in five extra minutes of basketball. Brewer managed to score the first points in overtime on a corner three, but then the Spartans went on to score 16 of the final 18 points to rally for the win.

The game featured 39 fouls with both teams going to the charity stripe 26 times. The Bucs made 19 freebies, compared to the Spartans netting 18.

Turnovers proved to be too costly for the Bucs as they coughed the ball up 15 times, leading to 18 points for the Spartans. UNCG was also plus-9 in fast-break scoring, 16-7.

Three Bucs scored in double figures with Brewer coming off the bench with a team-high 18 points. Brewer also grabbed six rebounds and dished out five assists.

Seniors Vonnie Patterson (Louisville, Ky.), Jordan Coffin (Knoxville, Tenn.), Silas Adheke (Lagos, Nigeria) and David Sloan (Louisville, Ky.) were all honored with a special pregame Senior Day ceremony as they were playing their final home game inside Freedom Hall. Due to COVID protocols, families were unable to be on the court but each family provided a special video message that was played on the video board.

UNCG was led by reigning SoCon Player of the Year Isaiah Miller as he scored a career-high 32 points, grabbed seven rebounds and had seven assists. Miller accounted for nine of the Spartans’ 16 points in overtime.

Neither team led by more than five points in the opening 20 minutes as ETSU carried a 31-29 lead into the locker room.

Patterson started the game off by hitting a three from the corner before the Spartans opened a four-point lead, 11-7, five minutes into the contest. The Bucs responded with a 7-0 run to go back up three, but the back-and-forth play continued as UNCG used a 12-5 spurt to regain a 23-19 advantage after Hayden Koval grabbed an offensive rebound and laid one in with just over six minutes left before intermission. Over the next five minutes, ETSU posted a pair of five-point leads at 29-24 and 31-26, but UNCG scored five of the last seven points of the half to make it a two-point contest.

The second half was much like the first as neither team led by more than four points.

UNCG’s lead came two minutes into the half at 35-31, while the Bucs led 50-46 following a Ty Brewer (Meridian, Miss.) three-pointer with exactly 10 minutes remaining in regulation. After missing a chance to extend the margin further, the Spartans posted a 6-1 run to go ahead 52-51.

The final 7-plus minutes was a see-saw affair with six ties and six lead changes, but after rallying from four three-point deficits during that span, the Bucs had a chance to win it in regulation. Following Sloan making one of two free throws to tie the game at 69 with 15 seconds remaining, Brewer forced Miller into a turnover, giving ETSU one final chance. After inbounding the ball near the Bucs’ bench, Coach Shay called timeout to draw up a final play. Unfortunately, with 3.1 seconds showing the clock, the only look ETSU was able to pull off was Brewer’s off-balanced three-pointer, which hit off the backboard and nearly dropped as the buzzer sounded.

Despite going up by three in the opening minute of overtime, the Bucs were unable to hold off Miller’s hot hand. Following Brewer’s go-ahead three at the start of the stanza, Miller banked in a three with the shot clock winding down to even the game at 72. That triple sparked a 12-0 run which the Bucs couldn’t answer. ETSU was just 2-of-12 in the overtime period, while UNCG made four of its five shots, including all six free throws. Miller was a perfect 3-of-3 (2-2 at the free throw line) in the period.

ETSU now gears up for the SoCon Tournament as the fifth-seeded Buccaneers take on the fourth-seeded Chattanooga Mocs Saturday afternoon at 2:30 p.m. inside the Harrah’s Cherokee Center in Asheville, N.C.