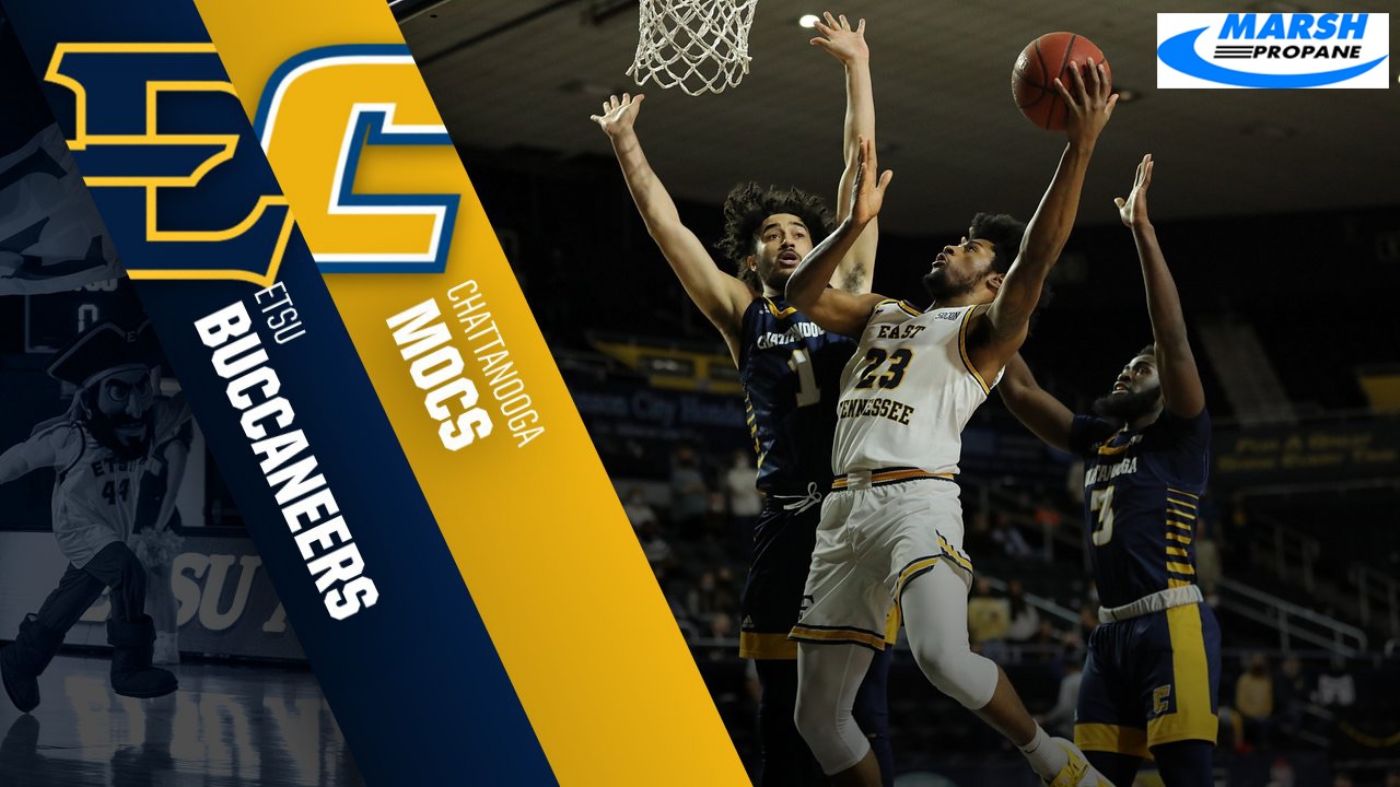 Fans can follow all of the action live on WXSM-AM 640 The Extreme Sports Monster as “Voice of the Bucs” Jay Sandos will provide the radio call, beginning with the Atmos Energy Pregame Show at 2 p.m. on the Buccaneer Sports Network. CLICK HERE FOR LIVE AUDIO

Saturday’s game will be televised on ABC Tri-Cities as well as video streamed live on ESPN+ as Pete Yanity and Dean Keener will be on the call; CLICK HERE FOR LIVE VIDEO

BUCS IN THE SOCON TOURNAMENT

The Bucs, who enter the weekend looking to defend their SoCon Championship, have won eight SoCon Tournament titles ... ETSU won four straight SoCon Tournament titles from 1989-1992, back-to-back titles in 2003 and 2004, won in 2017 and captured the tournament crown last year ... The Bucs have appeared in 12 SoCon title games and are 8-4 in those contests ... Overall, ETSU is 41-22 (.651) in 31 all-time SoCon Tournament appearances ... The Bucs have made it to the semifinals in each of the last five seasons, while appearing in three straight title games from 2016-18 … ETSU is 20-12 overall in first round & quarterfinal games in the SoCon Tournament, while winning each of the last five.

NOTES ON THE FIVE SEEDS

A WIN ON SATURDAY WOULD…

An ETSU win on Saturday would mark the Bucs’ 1,395th win in program history … The Bucs would move to 13-11 on the season … It would also advance to the SoCon semifinals for the sixth straight year.

Two Buccaneers earned postseason All-SoCon accolades as Damari Monsanto was named SoCon Freshman of the Year and third team all-conference by the media and Ledarrius Brewer was tabbed first team all-SoCon by the coaches and media … Monsanto became the fifth ETSU player in program history to receive the award as he joins Bo Hodges (2017-18), Tim Smith (2002-03), Greg Dennis (1987-88) and Troy Lee Mikell (1979-80) as the elite group of Bucs to be tabbed SoCon Freshman of the Year … Monsanto, who played in all 23 games with 18 starts, averaged 11.7 points and 7.3 rebounds, while knocking down 47 threes and shooting 78 percent at the free throw line … Brewer, the Bucs’ leading scorer at 16.6 points per game, also leads the team in field goals made (134), threes made (55) and steals (35). The redshirt junior guard ranks fourth in the conference in steals (1.6), seventh in scoring, ninth in field goal percentage (.470), 10th in three-point field goal percentage (.390) and is tied for 10th in threes made per game (2.5).

Damari Monsanto is looking to join an elite group of SoCon players to win Freshman of the Year and the SoCon Tournament title in the same season … Only three players prior have accomplished the feat with the last being Steph Curry in 2006-07 with Davidson … Monsanto would become the second Buccaneer player to do so as Tim Smith won both in 2002-03 and UNCG’s Jay Joseph was the first SoCon player to accomplish the feat in 2000-01.

Five of the last seven (including the last three) SoCon Tournament Champions led the league in scoring defense … ETSU, the defending champions, enter the tournament as the SoCon scoring defense leader at 66.3 points per game … This season, the Bucs held the opposition to 65 points or  below 11 times with ETSU winning nine of those contests – the two losses were vs. UAB (65-61) and at Chattanooga (53-51).

ETSU is well rested heading into the conference tournament as they have only played once in the last 17 days, which was last Saturday’s 85-74 overtime loss to UNCG … After the Bucs played Mercer on Feb. 17, their game at Samford on Feb. 20 and at VMI (Feb. 25) were cancelled due to COVID within those two programs.

The Bucs played their 14thovertime game since the start of the 2010-11 season last Saturday vs. UNCG … Overall, ETSU is 10-4 in those overtime games during that span … Meanwhile, ETSU is 8-5 in its previous 13 games following an overtime game as well as winning two of the three games after an overtime loss.

ETSU senior forward Vonnie Patterson has been on fire during the month of February as he’s shooting 73 percent (19-26) from the field and has made five of his seven three-point attempts in his last eight games … In his first 15 games, Patterson is shooting 41 percent (28-68) and is 5-of-23 from beyond the arc (22 percent).

Chattanooga enters the SoCon Tournament coming off an 81-77 overtime loss at Mercer on Feb. 24 and sits 18-7 on the season, while going 9-7 in SoCon play.

The Mocs had two players earn all-SoCon honors in Malachi Smith and David Jean-Baptiste … Smith, who’s averaging a team-best 16.8 points and 8.8 rebounds per game, landed first team all-conference honors by the coaches (second from the media) and Jean-Baptiste received second team nods by both … Jean-Baptiste is averaging 16.5 points and leads the team with 58 made threes.

Chattanooga is 14-1 this season when holding the opposition below 70 points, while they are 8-5 in games decided by five points or less this season.

The Mocs are averaging 73.4 points per game, which ranks ninth right above ETSU in the SoCon, while they’re allowing 69.5 points – placing them fifth in the league … Chattanooga is the top free throw shooting team in the conference (.787) and they rank third in turnover margin (+2.12).

Chattanooga swept the regular season series by a combined four points and the Mocs hold a slight 49-44 all-time series lead … The Mocs won 67-65 on Feb. 6 inside Freedom Hall when A.J. Caldwell knocked down a three-pointer with one second remaining, while they followed that up with a 53-51 win nine days later in Chattanooga.

Despite the two games being decided by four points there were only three ties and three lead changes in the series, while ETSU only led for a combined 34 seconds.

Ledarrius Brewer (13.5 ppg) and Damari Monsanto (13.0 ppg) were the only two ETSU players to average double figures in scoring in the two games this season, with Brewer averaging 12.0 points in the second half (accounting for 24 of ETSU’s 64 second-half points).

Prior to being swept this season, ETSU had won 10 straight in the series – the longest win streak among both schools in the series … Only 16 points separate the total team scores in the series with the Bucs holding a plus-16 advantage (6,900 to 6,884).

The rivalry between the Buccaneers and Mocs is in many ways directly related to the similarities between the programs ... Both teams’ successes have mirrored each other since their time in the SoCon ... Overall, the teams have accounted for 52 overall championships (22 for ETSU), 33 regular season titles (including North Titles) with the Bucs winning 14, 22 NCAA appearances (11 by the Bucs), each program has one Sweet 16 appearance, 15 Players of the Year (10 by the Bucs) and 16 Coaches of the Year (9 by the Bucs).

The teams have met six times in the SoCon Championship game with both teams winning three of them.

Thirty-four of the previous 93 meetings have been decided by five points or less, including five by one point.

Meanwhile, the two teams have also met 16 times in the SoCon tournament – a high for both teams – with those games being split at eight, including the Bucs winning the last two.

The winner of ETSU-Chattanooga advances to the semifinals to face either UNCG-Western Carolina-The Citadel on Sunday at 5 p.m.