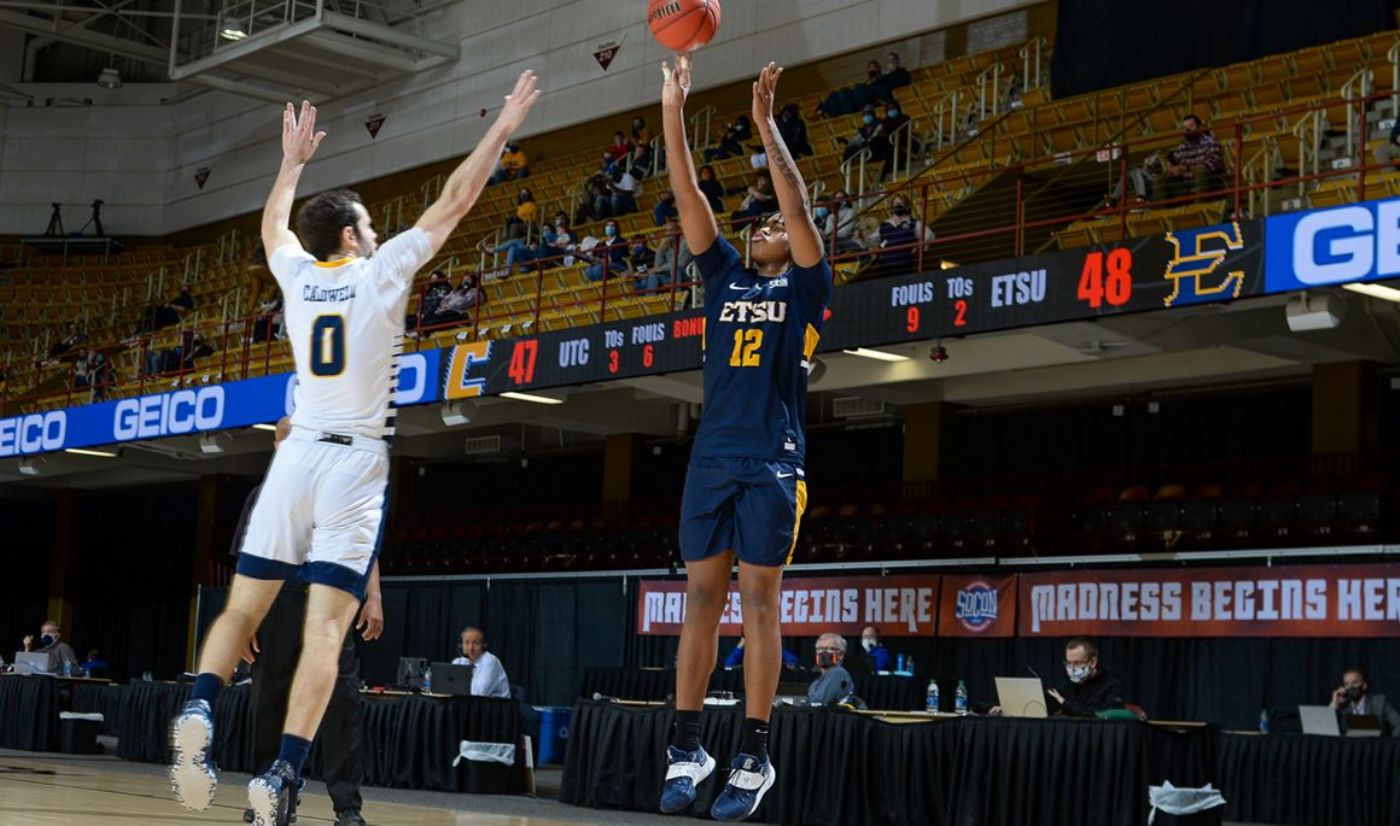 ETSU moves on to SoCon semis for sixth straight season

After being swept by Chattanooga in the regular season by a combined four points, the ETSU men’s basketball team was able to return the favor against its in-state rival. The fifth-seeded Buccaneers overcame a slow start and used a strong defensive effort to defeat the fourth-seeded Mocs, 63-53, in Saturday’s Southern Conference quarterfinal game inside Harrah’s Cherokee Center.

With the win, ETSU improved to 13-11 overall and secured its sixth straight trip to the semifinals as the Bucs take on top-seeded UNCG Sunday evening at 5 p.m. on ESPNU. The Spartans held off The Citadel  80-72 in the first quarterfinal game on Saturday.

The Bucs held a Chattanooga team that was without two starters – including first team all-SoCon selection Malachi Smith – 20 points below its season average, while ETSU improved to 10-2 this season when holding the opposition below 65 points.

For the second straight game in the series, ETSU held the Mocs to 53 points, matching Chattanooga’s season low.

The 53 points allowed by the Bucs was their lowest by an opponent in a SoCon tournament game since limiting Furman to 52 points in a semifinal win back on March 4, 2018.

Both teams made 11 free throws with ETSU going to the line 15 times and Chattanooga made 16 trips.

After being out-rebounded by four in the first half, the Bucs were plus-9 on the glass in the second en route to finishing plus-5 for the game, 37-32.

The Mocs jumped out to an 11-2 lead but with Chattanooga ahead 21-14, the Bucs used a 23-6 run to take their largest lead of the game, 37-27. ETSU never trailed from there and went on to end Chattanooga’s season for the third time in the last four years.

Four Buccaneer players scored in double figures with Freshman of the Year Damari Monsanto (Pembroke Pines, Fla.) registering his fourth double-double. Monsanto finished a game-high 18 points and grabbed 10 rebounds. Monsanto had a monster second half where he recorded 14 points and eight rebounds, while going a perfect 6-of-6 at the free throw line.

Senior point guard David Sloan (Louisville, Ky.) had an all-around impressive night as he totaled 17 points (12 in the second half), six rebounds and four assists.

Ledarrius Brewer (Meridian, Miss.) kept the Bucs in it in the first half as he scored eight of his 11 in the opening 20 minutes, while brother Ty Brewer netted 10  points on 5-of-9 shooting.

Despite missing 11 of its first 13 shots and trailing by as many as nine points early on, the Bucs finished the first half on a 9-0 run to take a 23-21 lead into the locker room.

The Mocs capitalized on ETSU’s shooting woes as they jumped out to an 11-2 lead and again pushed their advantage to seven when Jean-Baptiste assisted on a three by A.J. Caldwell, making it 21-14 with 4:46 left before halftime.

From there, momentum quickly shifted as the Mocs were held scoreless for the remainder of  the frame and ETSU used its 9-0 run to grab its first lead of the night, 23-21.

Coming out of halftime, the Bucs extended the run to 23-6 and ETSU grabbed its largest lead, 37-27, after Sloan fed Monsanto for a corner three in transition – capping off 10 straight points by the Blue and Gold at the 14:32 mark.

The Bucs never trailed after that surge but Chattanooga didn’t let up.

The Mocs scored the next five points after the Buccaneer run – and after pulling within three on two separate possessions – Chattanooga made it a one-point game, 48-47, following a three by Walker with 4:15 remaining. Monsanto answered Walker with a triple of his own on the Bucs’ next trip down the floor – and after Walker dunked one home to make it a two-point contest – Ty Brewer connected on a pull-up jumper – sparking ETSU’s 12-4 closing run.