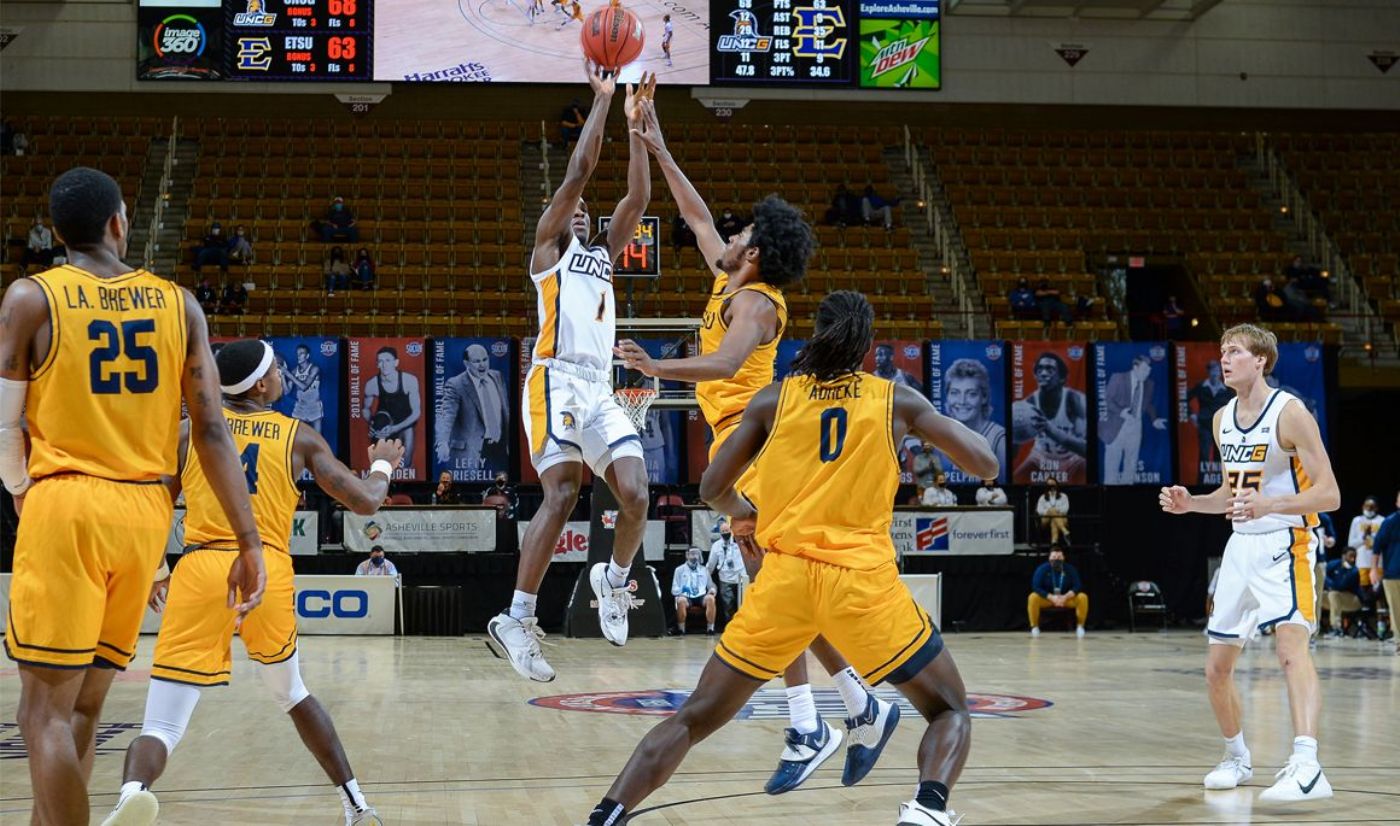 ASHEVILLE, N.C. (March 7, 2021) –  The ETSU men’s basketball team had its run for a second straight Southern Conference Tournament title come to an end on Sunday night.

UNCG knocked down a season-high 12 threes and Player of the Year Isaiah Miller scored a  game-high 21 points, leading the top-seeded Spartans to a 77-65 win over fifth-seeded ETSU in the SoCon semifinals inside Harrah’s Cherokee Center in Asheville, N.C.

In a game that saw the two teams combine for 21 made threes, ETSU had its season come to an end with an overall record of 13-12, while the Spartans advanced to Monday’s championship game after improving to 20-8.

After neither team shot a free throw in the first half, UNCG went 9-of-13 in the final 20 minutes, compared to ETSU netting six of its nine attempts.

For the third time this season, the Bucs outrebounded UNCG, 36-31, and turned nine offensive rebounds into 11 second-chance points. However, the Spartans were plus-13 in points turnovers as the scored 18 points off 12 Buccaneer miscues, and won points in transition, 11-2.

After seeing eight ties and four lead changes in the first half, UNCG never trailed in the second as they outscored the Bucs, 37-26.

Sloan finished with 13 points on 6-of-12 from the field, while Brewer netted 11 and grabbed six rebounds.

Miller scored 21 points on 9-of-21 shooting, while Keyshaun Langley added 11 and A.J. McGinnis knocked down three triples in 15 minutes off the bench. Milled also tallied seven rebounds, five assists and four steals, while Langley dished out seven of UNCG’s 14 assists.

Both teams came out on fire in the opening 20 minutes and featured a back-and-forth pace with the eight ties and four lead changes. After trading shots in the opening five minutes, the Bucs landed the first punch as they built a pair of nine-point leads at 25-16 and then again at 28-19.

However, after Sloan assisted on Patterson’s second three at the 8:26 mark, UNCG responded.

Over the next four minutes, the Spartans outscored ETSU 16-4 and regained a 35-32 following  a McGinnis three with 4:13 remaining. The Bucs, who made six of their first 12 attempts from beyond the arc, missed six straight during that Spartan run, but Damari Monsanto (Pembroke Pines, Fla.) snapped the streak with a game-tying bomb at the 2-minute mark, making it 35-35.

But just when it looked like ETSU was going to take a two-point lead into the break, Miller hit a corner three at the buzzer, giving UNCG a 40-39 advantage.

The Spartans started the second half just as they ended the first with a three-pointer from Kaleb Hunter and then capitalized on a Buccaneer turnover, resulting in a fast-break lay-up from Miller, making it 45-39.

ETSU was able to clip its deficit to two, when Ledarrius Brewer made his lone three from the corner and was fouled, converting on the four-point-play, pushing the score to 54-52 with 12:23 remaining.

Again, the Bucs couldn’t get over the hump, as UNCG scored 11 of the next 14 points to open a double-digit lead, 65-55, with just over seven minutes left. ETSU was able to get within five, but the Bucs came up empty on their next two possessions and Langley’s three with 1:48 remaining was the final blow as the regular season champs extended the lead to 71-63. The Spartans scored on their final three possessions to secure the 12-point win.

ETSU saw the 2020-21 season come to an end, while UNCG faces the winner of VMI-Mercer in Monday’s championship.