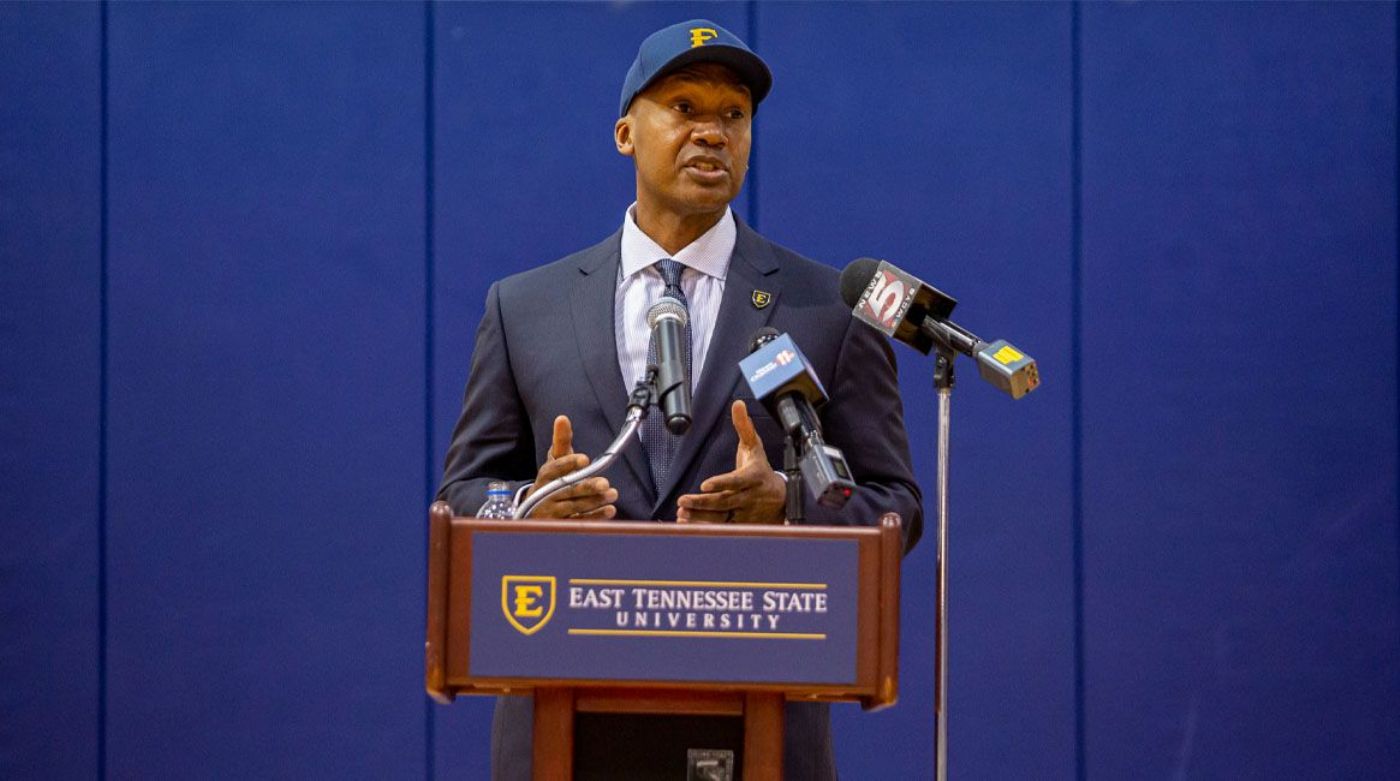 “It is an honor to welcome Coach Desmond Oliver as the head coach of ETSU Basketball,” said Carter. “Coach Oliver has a tremendous reputation from the Ivy League to the SEC as a man of the highest integrity and extraordinary work ethic. His wealth of collegiate coaching experience includes multiple championships, postseason appearances, renowned recruiting classes, and development of NBA Draft picks. Those who know him best state that Coach Oliver’s comprehensive basketball knowledge, relationship building, fierce competitiveness, and commitment to young men are what make him so special.  As I have gotten to know Coach, I am most excited about the father, husband, and person he is. Our ETSU Basketball program is very fortunate to have Desmond Oliver as its head coach.”

This marks Oliver’s first head coaching job and he’s excited for the opportunity to lead a program with such tradition-rich history.

“ETSU basketball has a history of success that was attractive to me,” said Oliver. “This program has experienced success on the court and has also successfully cultivated strong relationships throughout the community. I’m really excited about this opportunity to build on that and lead us as we take our next steps forward. My staff and I are going to hit the ground running, and begin our pursuit of cementing ETSU as the hardest working and most respected program in the Southern Conference—a program admired nationwide for doing things the right way. You’re going to be proud of the culture within this program.

“No one is going to outwork us as we develop young leaders within our program who will connect with this community and make a positive impact. My family is eager to make Johnson City our home and engage in productive dialogue about uplifting approaches to the unique challenges our young people face.”

During his six seasons in Knoxville, Oliver saw Tennessee compile 123 wins and make three trips to the NCAA Tournament, including a Sweet Sixteen appearance in 2019. In the 2018-19 season, the Vols were ranked as high as No. 1 in the AP Top 25 Poll and finished sixth in the country with an overall record 31-6. Tennessee, who was ranked in the top-10 all season, went a perfect 11-0 in games where Oliver had the scout.

Oliver helped direct Tennessee to the 2018 SEC Championship and a No. 3 seed in the NCAA Tournament. The Vols were one of the best defensive teams in the country as they finished sixth nationally in defensive efficiency and led the SEC in scoring defense (65.7 ppg).

Oliver played a critical role in Tennessee’s recruiting, as the Vols’ 2020 class was ranked No. 4 nationally by ESPN and their 2016-17 freshman class finished as the highest-scoring rookie class in program history with 1,040 points. Oliver coached three players who were selected in the NBA Draft, including back-to-back SEC Player of the Year and first team All-American Grant Williams. Williams was drafted 22nd overall by the Boston Celtics in 2019, while Admiral Schofield (42nd overall by Philadelphia) and Jordan Boone (57th overall by Detroit) were also taken in the 2019 Draft.

Prior to his one season at Canisius (2009-10), where the Golden Griffins had their highest win total over a nine-year span, Oliver had his first run as an assistant in the SEC at the University of Georgia. Oliver led the Bulldogs to a pair of postseason berths – a 2007 NIT appearance and a trip to the 2008 NCAA Tournament. Georgia completed a historic run to win the 2008 SEC Tournament as they had to win two games on Saturday – the quarterfinal game versus Kentucky followed by the semifinal win over Mississippi State. Georgia then defeated Arkansas in the championship, marking the Bulldogs’ first SEC Tournament title since 1983. While at Georgia, Oliver recruited Travis Leslie and Howard Thompkins, who both ended up being NBA Draft picks.

Over a four-year stretch, Oliver spent time on Jim Baron’s staff – one season at St. Bonaventure, and then three years at Rhode Island. At Rhode Island, Oliver helped guide the Rams to a 13-win improvement from 2001-02 to 2002-03. The Rams finished with 21 wins in 2002-03, and again, posted another 20-win campaign in his third and final season en route to making their second straight NIT appearance.

The Buffalo native began his collegiate coaching career in New York where he joined Jack Armstrong’s staff at Niagara. Oliver helped recruit Alvin Young to the Purple Eagles, and Young went on to lead all NCAA Division I players in scoring in 1999 (25.1 ppg) and receive MAAC Player of the Year honors.

Following his three years at Niagara, Oliver then coached one season at Texas A&M and two seasons at Cornell.

In 1992, Oliver graduated from Dominican College in Orangeburg, N.Y., where he was a three-year starter on the basketball team and a two-year team captain. He earned a Master’s degree in student personnel administration at Buffalo State. As Oliver was working on his Master’s, he started his coaching career as a varsity assistant and head junior varsity coach at Turner-Carroll High School.

Oliver will be joined in Johnson City by his wife, the former Annette Applewaithe. The couple has two sons – Dante and Dallas.