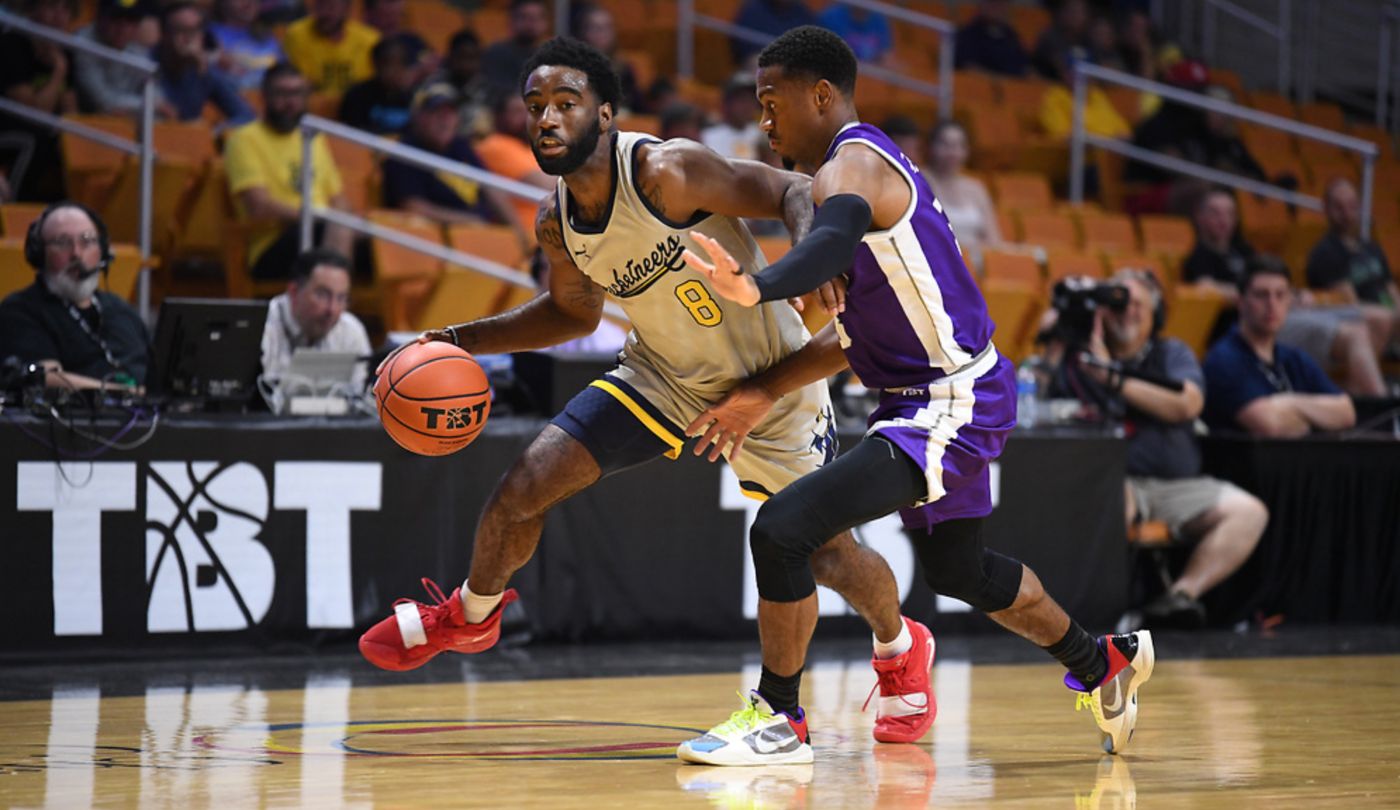 CHARLESTON, W.Va. (July 21, 2021) – In a defensive standoff that was never separated by more than five points, ETSU’s The Basketball Tournament alumni team fell victim to the competition’s most exciting, and soul crushing rule.

Leading West Virginia Region number one seed Sideline Cancer 50-49 with four minutes remaining, the 12-seed Bucketneers entered the Elam Ending, which adds eight points to the winning team’s total to equal the number needed to claim victory. With an untimed race to 58 at hand, 2018 Southern Conference Player of the Year Desonta Bradford scored seven of the first 11 points in the sprint to the finish, giving his squad a 57-53 lead that put them just one point away from an Elite Eight berth and trip to Dayton, Ohio, the site of the 64-team tournament’s championship.

Just moments away from picking up their third win of the competition, a number that would mark the halfway point of the six needed to claim the tournament’s $1 million prize, Bradford & Co. saw Sideline Cancer’s Trey Lewis sprint to the goal and drop in a layup to cut the one seed’s deficit to two. Needing just one point on the ensuing possession, Bradford spread the floor and drove to the middle of the paint, but missed a floater that would’ve sealed the victory, a Justin Tuoyo putback meeting the same fate. Sensing opportunity after a scramble at the rim, heralded international star and 2016-17 NCAA leading scorer Marcus Keene chased down the loose ball and streaked up the floor needing two to tie and a three to win.

Keene, a 38 percent three-point shooter in a collegiate career split between Youngstown State and Central Michigan, eschewed the two in favor of pulling up in transition with his feet on the TBT logo nearly 30 feet from the rim.

“I knew the situation,” Keene said. “It’s a shot I actually practice a lot.”

Keene, with the game in his hands, made the walk-off three, ending the Bucketneers thrilling and impressive run in the single-elimination tournament.

The 16 combined points during the Elam Ending were a sharp departure from the rest of the Sweet 16 showdown, the 58-57 final accounting for the third-fewest combined points to date in the 2021 TBT. The nip and tuck affair featured 11 ties, 17 lead changes and just 14 combined assists thanks to tremendous team defense. Sideline Cancer’s Jamel Artis led all scorers with 19 points on 9-of-12 from the field, while Bradford’s 16 points led the nine men making up ETSU’s alumni team that also consisted of Tuoyo, a Chattanooga alumnus, and Cornelius Hudson, hailing from Wake Forest.

While the Bucketneers shot at $1 million dollars in 2021 is done, at least one from the team made it clear postgame that the team’s presence at The Basketball Tournament wouldn’t stop with Wednesday’s defeat.

Thank you Buc Fans, TBT and Charleston WV.. We will be back.

For more information on ETSU Men’s Basketball, visit ETSUBucs.com and click on the men’s basketball page.