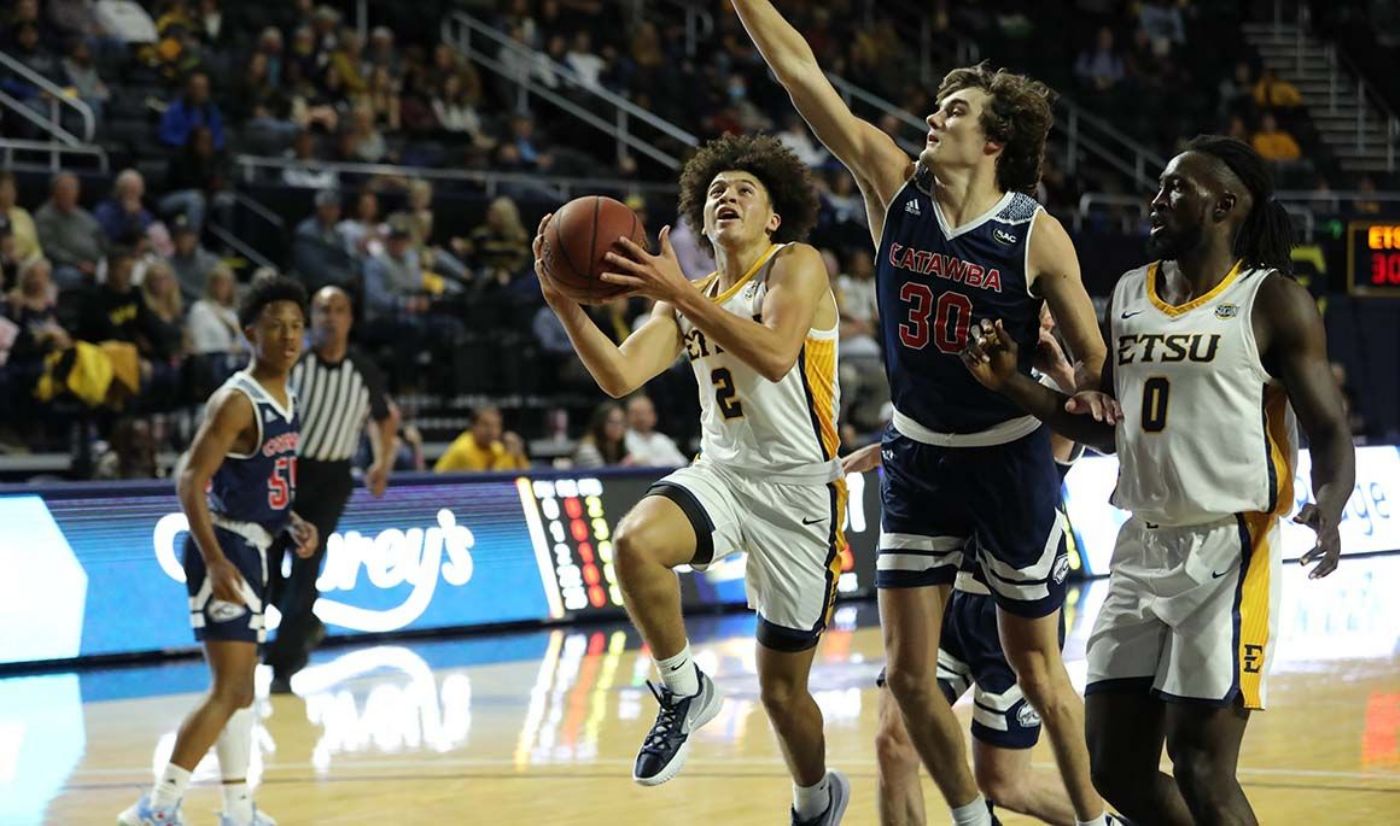 JOHNSON CITY, Tenn. (Nov. 5, 2021) – ETSU men’s basketball put on an offensive clinic as the Buccaneers cruised to a 91-58 win over Catawba in an exhibition game on Friday night inside Freedom Hall.

Collectively, four Bucs scored in double figures, while ETSU made 33 field goals and drained 11 three-pointers in the 33-point win. For the game, the Blue and Gold shot 50 percent from the field and outrebounded the Indians by 30, 51-21, including pulling down 20 offensive boards. Catawba was held to a 33 percent shooting clip from the field and 33 percent from beyond the arc.

The offense was as consistent as it could be with the Bucs scoring 46 first-half points on 16 made field goals (six three-pointers), while putting up 45 in the final 20 minutes on 17 made field goals (five made threes).

ETSU jumped out to a 20-5 start in the opening five and a half minutes as the Bucs made eight of their first 10 shots with five different players reaching the scoring column during that run. The Blue and Gold led by as many as 26 points in the first half, 46-20, and took a 22-point lead into locker room, 46-24.

The Buccaneer lead dipped below 20 points for only 49 seconds in the second half, but after Catawba inched to within 18, ETSU mounted an 18-5 run to see its lead soar to 31, following a fast-break lay-up by Kordell Charles (Ontario, Canada), making it 66-35 with 11:23 remaining.

Charles gave ETSU its largest lead of the night when Adheke found him open for a three, extending the margin to 36, 83-47, with just under four minute to play. The Bucs’ lead remained in the 30-point threshold and ETSU walked away with the 33-point victory.

The Bucs generated 38 points in the paint and assisted on 18 of their 33 made field goals.

Catawba was led by Kris Robinson’s 15-point effort, while Trevion Lamar and Ray Kowalski each finished with 12.

Six total technical fouls were called in the game with the Indians being dealt four, including their coach being ejected early in the second half.

The Bucs open the 2021-22 season next Friday, Nov. 12 when ETSU heads to Boone to take on Appalachian State. Tip-off is scheduled for 6:30 p.m. inside the Holmes Convocation Center.