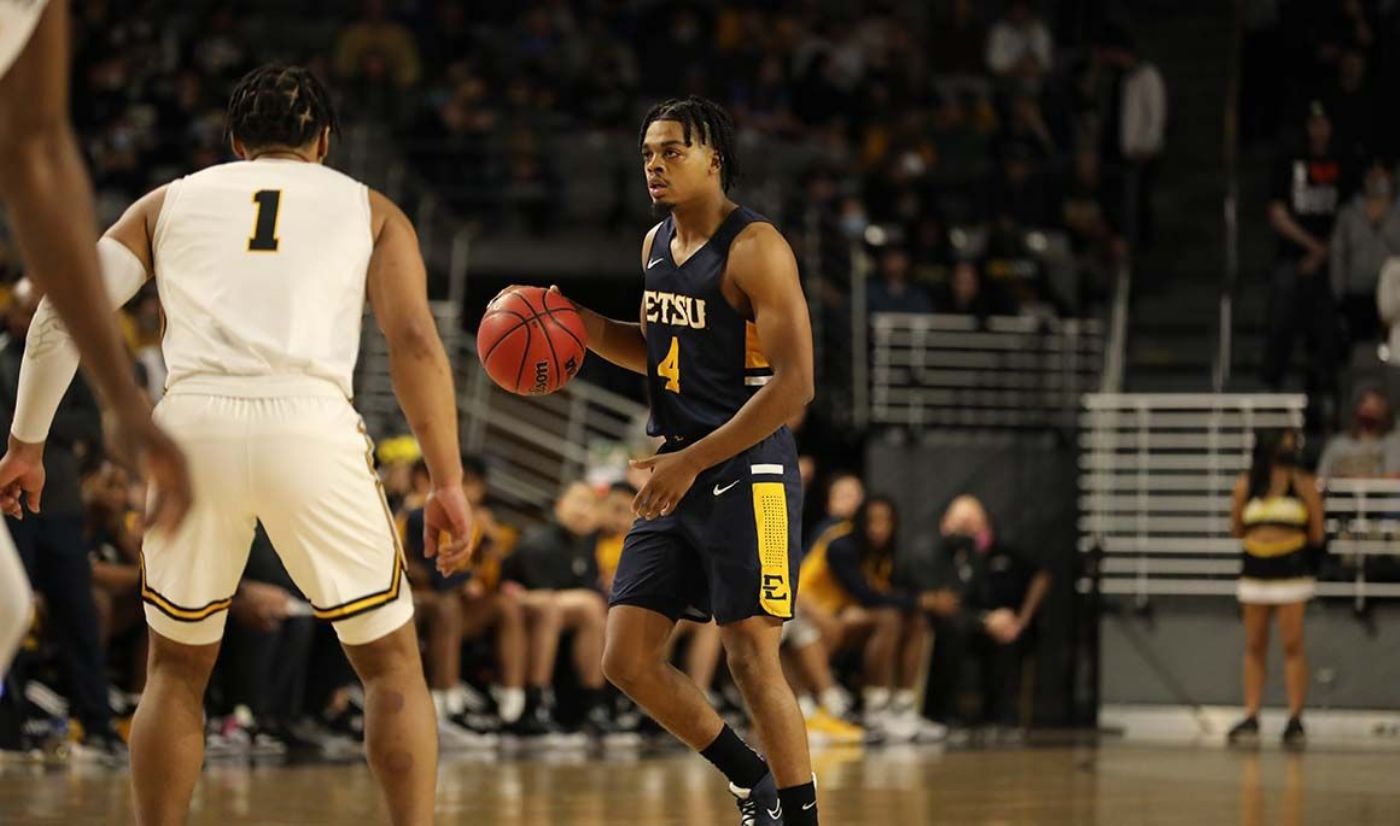 BOONE, N.C. (Nov. 12, 2021) – The ETSU men’s basketball team battled in its season opener, but Appalachian State made a pair of go-ahead free throws with 11 seconds remaining to defeat the Buccaneers 69-67 on Friday night inside the Holmes Convocation Center.

In a game featuring former Southern Conference rivals, both teams dealt several punches as the contest saw 10 ties and nine lead changes. With the game tied at 67, Appalachian State’s Justin Forrest got the call he needed when Silas Adheke (Lagos, Nigeria) was whistled for a controversial blocking call. Forrest went to the line and knocked down the first – and after a Buccaneer timeout – the Mountaineers’ leading scorer on the season netted the second to give his team a two-point advantage.

Following a Mountaineer timeout, the Bucs had to go the length of the floor but Ty Brewer’s (Meridian, Miss.) three-point attempt was off the mark, and after the ball landed out of bounds, there was six-tenths of a second remaining. Appalachian State heaved the ball in bounds and time expired to hold onto the win.

The Bucs shot 42 percent from the field (26-62) and knocked down 10 three-pointers, while Appalachian State posted a 44 percent clip from the floor (23-53) and also made 10 triples. The teams flipped the script in the halves as ETSU made seven triples in the first half, compared to only three by the Mountaineers. However, the Bucs were held to three in the second and Appalachian State made seven.

The Mountaineers made 12 more trips to the free throw line as they were 13-of-18 at the stripe, compared to ETSU going 5-of-6.

ETSU assisted on 16 of its 26 makes, but was out-rebounded by seven, 36-29. Both teams made 13 second-chance points with the Bucs grabbing nine offensive boards to Appalachian State’s’ 10.

After having 20 turnovers in last Friday’s exhibition game, the Bucs only turned it over seven times in the season opener.

With the loss, ETSU moved to 60-41 in season openers, while it also snapped a seven-game win streak in the series against Appalachian State. The Mountaineers – who won the 2021 Sun Belt Tournament and advanced to the NCAA Tournament – rebounded from Tuesday’s season-opening loss at Iona and moved to 1-1 on the young campaign.

Friday marked the head coaching debut for ETSU’s Desmond Oliver as he was named the 18th head coach in program history on April 5.

Appalachian State’s Adrian Delph led all players with 19 points on 7-of-16 shooting.

The first half was a game of runs and ETSU carried a five-point lead into the half, 33-28. The Bucs scored the first points of the night but Appalachian State rattled off nine unanswered to go up seven three and a half minutes in.

ETSU clawed back, and with the game tied at 13, the Bucs mounted a 13-3 run to go ahead, 26-16, when Sloan hit Ledarrius Brewer in the corner for a three with 8:20 remaining in the stanza. The Mountaineers responded with an 8-0 run to cut the deficit to two, but the Bucs stopped the bleeding with a triple from Sloan and second-chance lay-up by Ledarrius Brewer with just under four minutes before intermission.

The Bucs hit seven threes in the opening 20 minutes and held Appalachian State to 3-of-11 from long range. Patterson led the Blue and Gold with eight points on a perfect 3-of-3 shooting (2-2 from three).

ETSU opened the final 20 minutes pushing its lead to seven on two different possessions, but the Bucs weren’t able to expand it from there. The Bucs held the lead for the first six minutes of the frame but Appalachian State regained a 42-41 advantage when Michael Almonacy connected on a three at the 14:01 mark.

From there, neither team led by more than three as the game had eight ties and six lead changes down the stretch.

The Bucs led 48-45 and again at 51-48, but both times the Mountaineers answered with threes to tie the game up. ETSU’s last lead was at 57-55, thanks to a turnaround jumper by Ledarrius Brewer with 6:40 showing on the clock, but like they did earlier, Appalachian State made another three to take the lead for good.

ETSU never backed down as they tied it up four different times after the Mountaineers went back ahead, but Forrest’s free throws with 11 ticks left gave Appalachian State the lead for the remainder of the night.

ETSU heads to Knoxville to take on No. 17 Tennessee on Sunday at Noon inside Thompson-Boling Arena. The game will be televised on SEC Network.