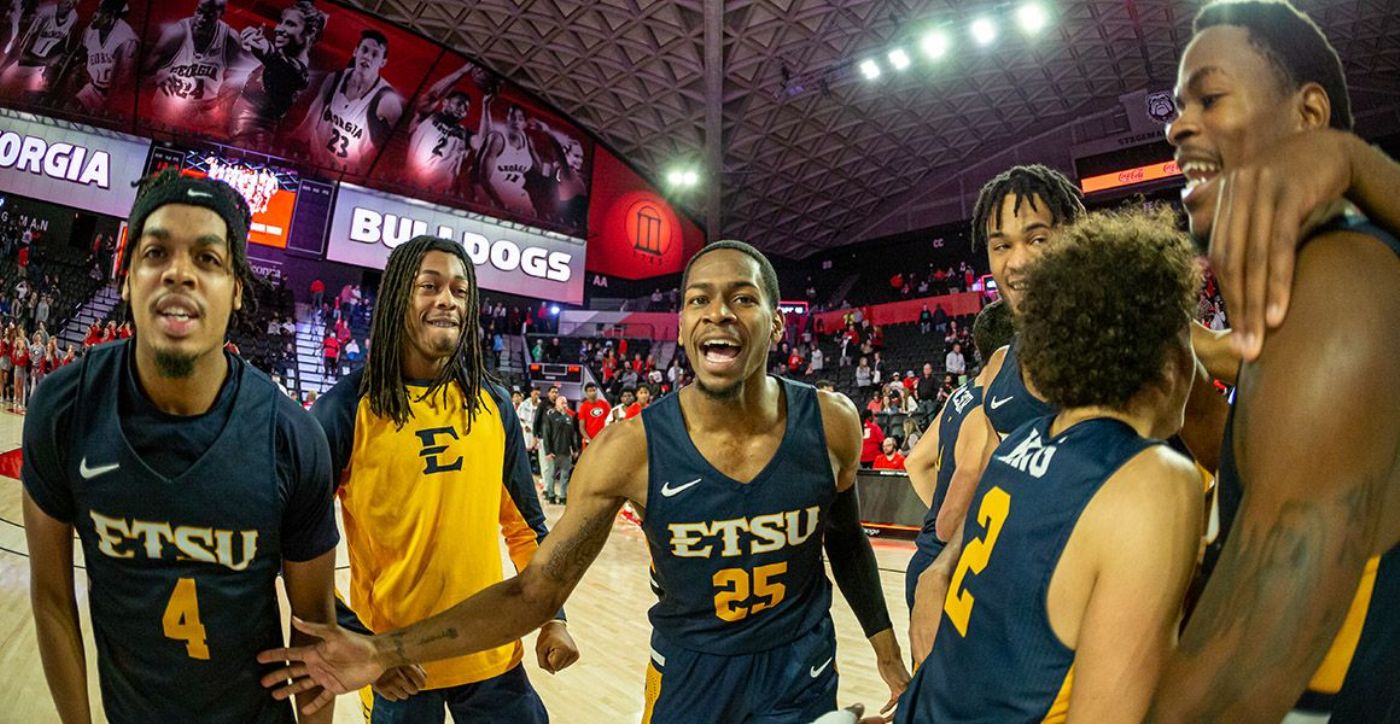 Down by eight with exactly four minutes remaining, the Bucs closed the game on a 12-2 run, highlighted by Sloan’s game-winning three-pointer with 8.4 seconds remaining to lift ETSU past Georgia 86-84 on Wednesday night inside Stegeman Coliseum.

The Bucs opened up on fire as Sloan scored nine of ETSU’s first 12 points and the Blue and Gold led by eight three and a half minutes into the contest. ETSU led by eight twice later in the half before Georgia used a 13-3 run to regain a 30-29 lead with 6:27 remaining before intermission. However, Ledarrius Brewer quickly put the Bucs back ahead with a three-pointer on ETSU’s next trip down the floor, fueling a brief 7-0 spurt to go up by six at the 5:05 mark. The Blue and Gold eventually led by as many as 10 in the half and a tip-in by Mohab Yasser at the buzzer sent ETSU into the locker room up, 48-39.

ETSU started the second half just as they did the first with Sloan scoring the first five points and the Bucs led 53-39 with only 48 seconds coming off the clock.

The Blue and Gold were unable to extend the lead and Georgia got back into the game in a hurry. The Bulldogs mounted a 17-5 run with a over the next four-plus minutes, making it 58-56 with 14:54 remaining.

The Bulldogs eventually led by eight with exactly four minutes left, but ETSU didn’t back down.

The Blue and Gold closed the final minutes on the 12-2 run, including 10 straight scores to pull even at 82. The 10 consecutive points came from a lay-up by King, followed by a Ledarrius Brewer three and then the Sloan steal and score. The run was capped by Yasser as he grabbed an offensive rebound and was fouled – where he hit one of two free throws – tying the game at 82 with 57 seconds left.

Georgia regained an 84-82 lead when Baumann made a jumper with 35 ticks remaining, setting up the heroics from Sloan. With the shot clock counting down, Sloan stepped up and hit a three from the wing, putting the Bucs up for good at, 85-84, with 8.4 seconds left. The Bulldogs had one last look but Baumann’s corner three was off the mark and King grabbed the rebound. King was fouled with 0.6 seconds left – and after he made the first free throw – his intentionally missed the second, allowing Georgia to call timeout with three-tenths remaining. The Bulldogs heaved one three-quarters of the court and the Bucs deflected the pass to run out the clock.

The Bucs open Southern Conference play on Thursday, Dec. 30 when ETSU takes on Chattanooga at 7 p.m. inside McKenzie Arena. The game will be televised on ESPNU.