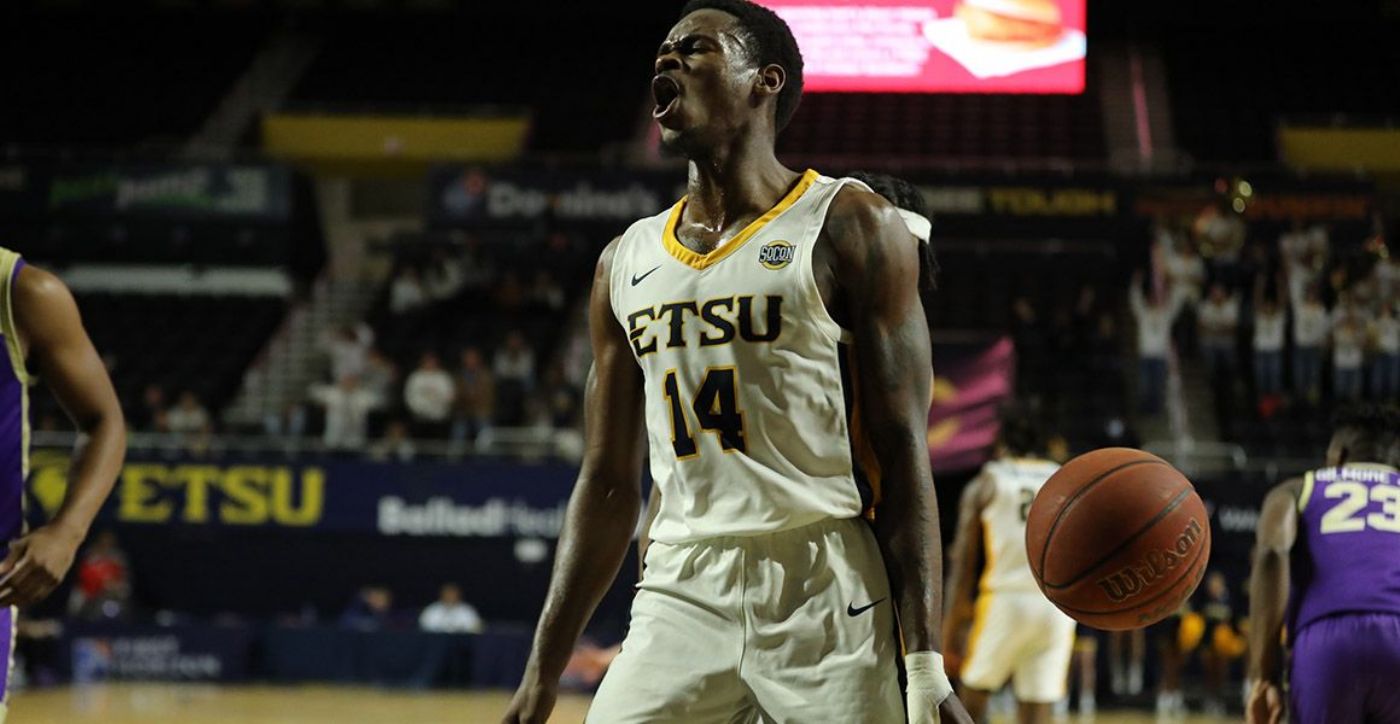 JOHNSON CITY, Tenn. (Jan. 10, 2022) – From high-flying dunks, to balanced scoring, to stingy defense, the ETSU men’s basketball team had some fun, as the Buccaneers enjoyed an 87-69 rout over Western Carolina on Monday night inside Freedom Hall.

Ledarrius Brewer scored the first points of the night on the three-pointer and ETSU never trailed.

The Bucs took control with a 15-3 run, which ended with nine straight scores, to see their lead soar to 15, thanks to King’s second made three making it 24-9 with just under nine minutes left in the first half.

The lead never dipped below double figures the rest of the night – and after Western Carolina pulled within 10 at the 4:31 mark – ETSU scored 11 of the final 15 points of the opening stanza to take a 42-25 lead into the break.

The Bucs posted three dunks in the first half, including Sloan and Yasser assisting on alley-oops to Seymour to ignite the closing run.

ETSU assisted on nine of its 16 makes in the first half, while shooting 53 percent from the field and outrebounding Western Carolina, 25-17. The Bucs cashed eight offensive rebounds into 11 second chance points in the opening 20 minutes, along with scoring 24 points in the paint. The Blue and Gold were well-balanced on offense with five different players scoring at least five points in the frame.

Like they did to start the night, ETSU scored the first bucket of the second half to go up 19, while the lead went over the 20-point threshold a minute and a half in as Sloan found Ty Brewer for a lay-up in transition, moving the score to 48-27.

King then took over as he enjoyed a stretch where he scored 13 ETSU’s 20 points, capped by a dunk then a step-back three, giving the Bucs their largest lead of the night, 73-44 with 9:39 remaining.

ETSU’s lead hit 29 on one more possession, courtesy of a Yasser lay-up, while the Bucs showcased three more dunks in the final eight and half minutes – two by Ty Brewer – and one from Matt Nunez (Newport News, Va.), bringing the bench in celebration mode.

In total, the Bucs totaled seven dunks on the night.