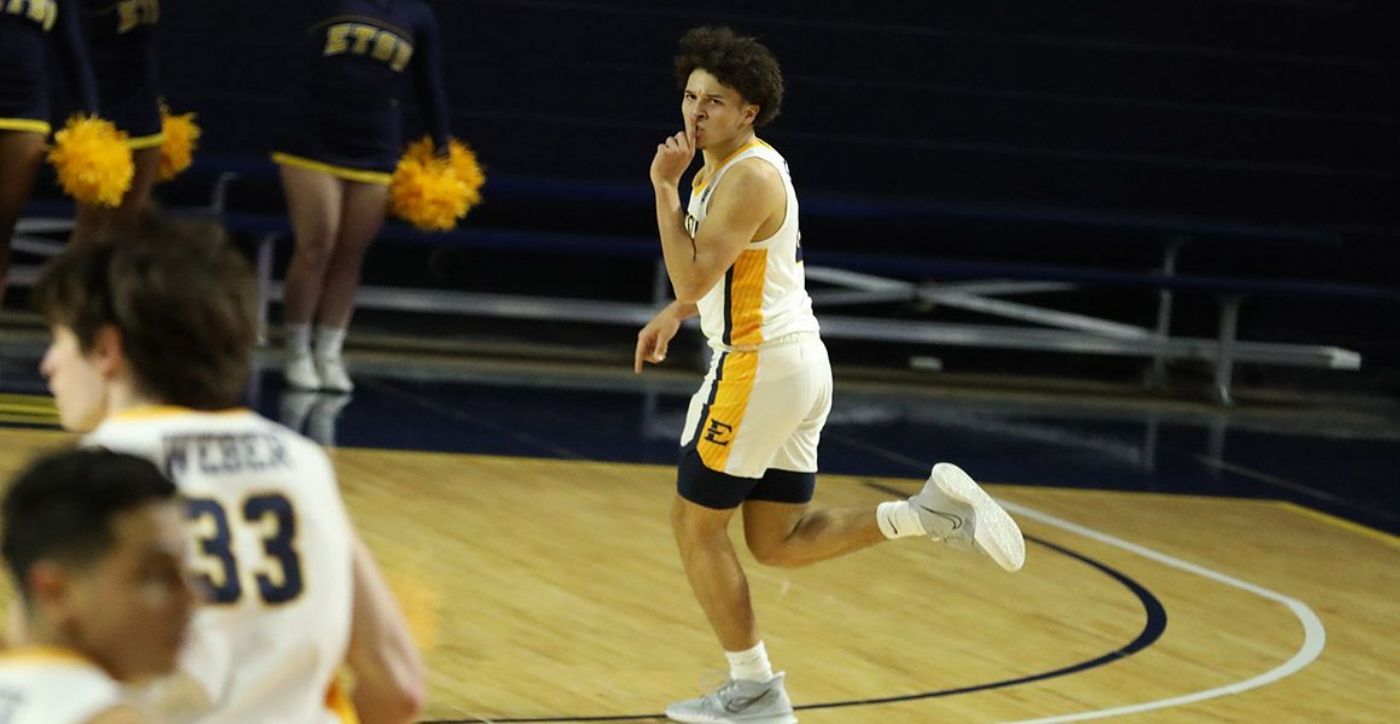 BIRMINGHAM, Ala. (Jan. 15, 2022) – All five of ETSU’s starters scored in double figures and the Buccaneers shot over 50 percent from field, as the Blue and Gold edged Samford 88-85 on Saturday evening inside the Pete Hanna Center in Birmingham, Ala.

David Sloan (Louisville, Ky.) made one of two free throws to give ETSU the three-pointer lead with 4.6 seconds remaining and Samford had a look for a game-tying three, but Cooper Kaifes’ attempt from the left wing didn’t fall allowing the Bucs to come away with a key conference road win.

The first half was full of fireworks as the teams combined for 92 points, 36 made field goals and 16 threes – it was no surprise they were all even at 42 heading into the break.

Neither team led by more than six points as there were five ties and six lead changes with both squads hitting identical shots (18) and attempts (32), while each knocking down eight three-pointers. Both teams dished out 11 assists and netted 18 points in the pant.  The Bucs got it done in second-chance points as ETSU turned six offensive rebounds into 12 points.

The Bucs’ held three five-point leads in the half at 33-28, 35-30 and finally 38-33 when Sloan hit his only three of the contest to snap a three-plus minute scoring drought. ETSU was unable to build on that shot and Samford made six of its last seven shots to go into the half knotted at 46.

Jordan King led the Bucs with 11 first-half point and Ledarrius Brewer – who picked up two fouls in the opening 20 minutes – added nine.

There was not much breathing room in the second half.

ETSU built its largest lead at 59-51 following a King three-pointer with 14:24 to play, but Samford responded with nine unanswered over a three-minute stretch to go back up one.

Ty Brewer knocked down a three-pointer to stop the Bulldog run and put the Bucs ahead by two – and after Samford pulled even at 62 – Ledarrius Brewer sank another triple, making it 65-62 with 10:08 remaining.

The Blue and Gold never trailed after that three and led by six when Weber followed up with a dunk on a missed shot with 51 seconds left. Samford wasn’t done as they scored five straight points to make it 85-84 after Glover forced a steal and Wesley Cardet laid one in with 29 seconds showing on the clock.

The Bulldogs called a timeout and tried to force a steal, but ETSU beat the press and Samford was forced to foul King with 21 ticks remaining. The Buccaneer guard made both free throws, pushing the ETSU lead back to three.

Samford had the ball with a chance to tie, but after Glover got past Ledarrius Brewer, Brewer fouled him before he could attempt a shot, sending the Bulldog to the line for the 1-and-1. Glover made the first, missed the second and Sloan came away with the critical rebound. Sloan was fouled and made the first of two free throws with 4.6 remaining and Samford couldn’t connect on the game-tying three, sending ETSU back to Johnson City with its second true road win of the season.