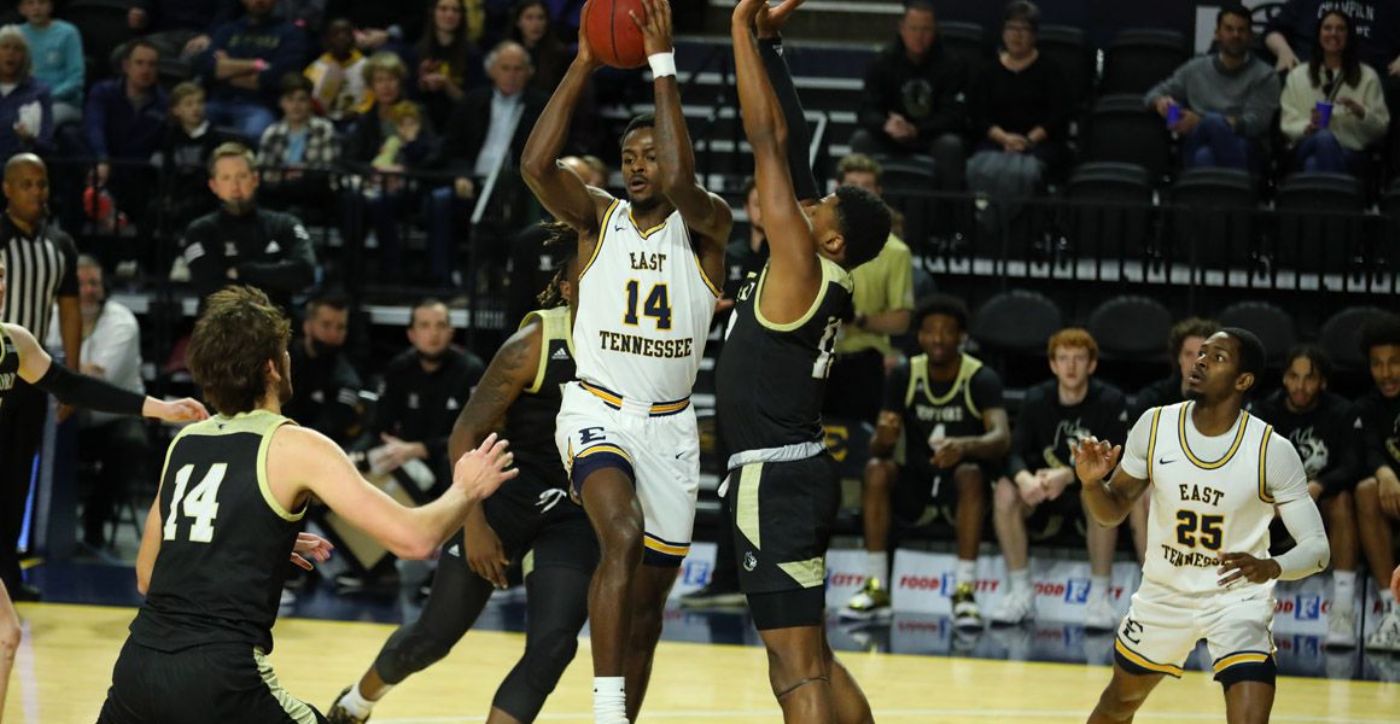 Bucs battle but come up one possession short at Wofford
ETSU at Wofford | February 05, 2022
Related Links

SPARTANBURG, S.C. (Feb. 5, 2022) – Down by two with 17.4 seconds remaining, the ETSU men’s basketball team had two chances for a game-winning or tying basket, but the Buccaneers came up one possession short as the Blue and Gold fell 62-60 at Wofford on Saturday afternoon inside Richardson Indoor Stadium.

The first half went back-and-forth with three ties and seven lead changes, but with the game tied at 19, ETSU rattled off seven straight points to go ahead, 26-19 with just under five minutes to go before the break. For the 18th time this season, the Bucs took a lead into the locker room as ETSU led, 30-26.

For the half, ETSU held Wofford to 33 percent from the field (10-30), while the Bucs shot 44 percent (12-27). Ledarrius Brewer accounted for a third of ETSU’s points in the opening 20 minutes, while both teams only turned the ball over two times.

The Bucs led by seven early in the second half and were up 40-35 following a lay-up by Mohab Yasser (Giza, Egypt) with 14:58 remaining.

From there, Wofford held the Bucs scoreless for a three-plus minute stretch where they scored 11 unanswered points and the Terriers regained a 46-40 lead at the 12:08 mark.

Despite never retaking the lead, ETSU continued to fight down the stretch and pulled within one following back-to-back dunks by Ty Brewer, making it 58-57 with 3:35 showing on the clock. The Bucs got a stop on the ensuing possession but couldn’t connect on the go-ahead bucket, while B.J. Mack laid one in, putting Wofford ahead by three.

Jordan King pulled the Bucs back even at 60 with a three-pointer at the 2:19 mark, but ETSU couldn’t get over the hump. Again, the Blue and Gold got a stop when Mack was called for an offensive foul, but the Bucs’ jumper was blocked on the next trip down the floor and Wofford came down with the defensive rebound.

The Terriers took the lead for good when Klesmit was fouled with 1:12 remaining and he hit both free throws, making it 62-60. After ETSU missed a jumper, Wofford pulled down the board and the Bucs made another defensive stop. Following a timeout with 14.7 seconds remaining, David Sloan (Louisville, Ky.) drove to the rim but his lay-up was blocked. The Bucs used their final timeout with 7.3 showing on the clock, but Ledarrius Brewer took the inbounds pass and couldn’t knock down a long jumper from inside the arc as Wofford held on for the two-point win.