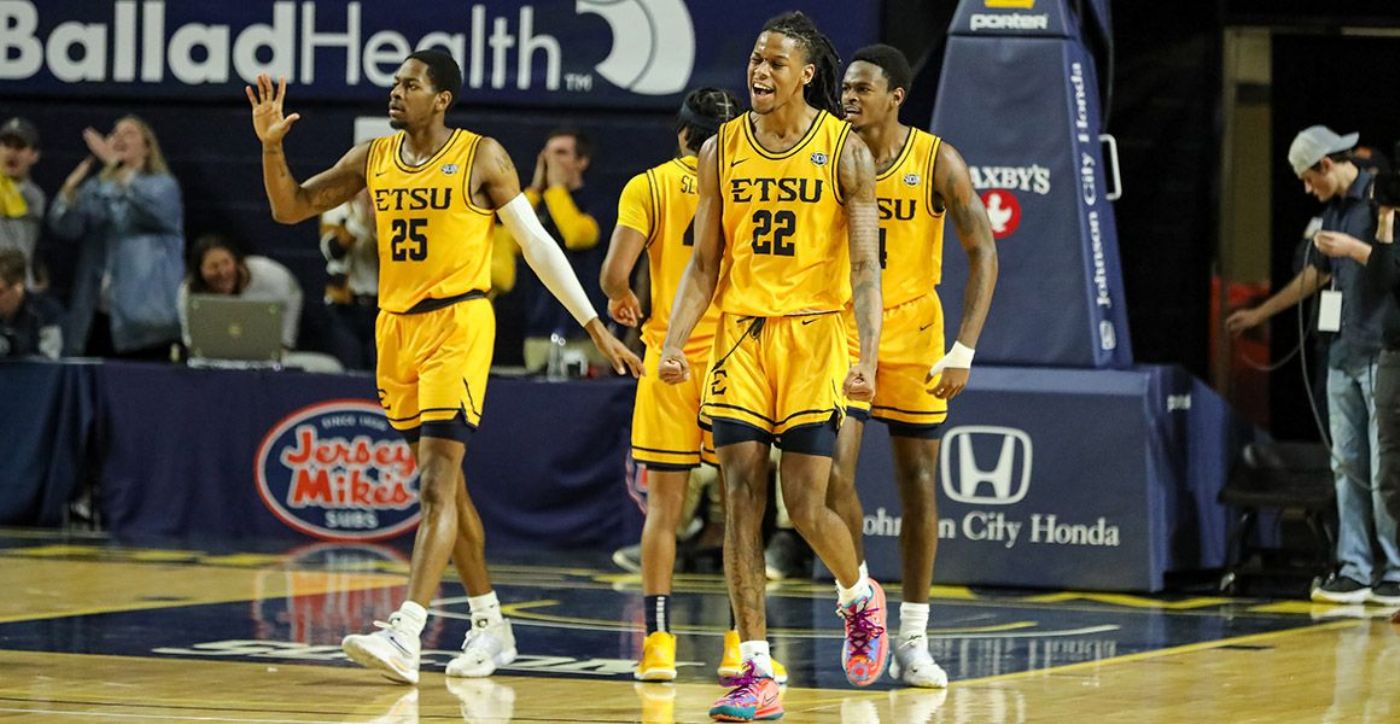 JOHNSON CITY, Tenn. (Feb. 7, 2022) – All five of ETSU starters scored in double figures and the Buccaneers got stops late to hold off Furman, 75-71, in front of an electric crowd inside Freedom Hall on Monday night.

The Bucs came out on a mission and with a lot of intensity as they knocked down their first five three-point shots and led by as many as 18 before taking a 43-30 lead into intermission.

ETSU scored 10 of the first 12 points and went ahead 23-11 when Ledarrius Brewer connected on back-to-back triples with 12:24 remaining in the half. After Furman pulled within seven, the Bucs mounted a 13-2 surge to open the 18-point lead when David Sloan became the fifth Buccaneer to knock down a three with just under six minutes left before halftime. ETSU’s lead never dipped below double figures as the Blue and Gold led by 13 at the break.

The Bucs pushed their margin to 15 early on in the second half, but Furman – who was needing a win to keep chase with league-leading Chattanooga – fought its way back into it with the three-ball and points off turnovers. With the Bucs ahead 52-37, the Paladins erased the deficit in a matter of five minutes as the visitors from Greenville scored 17 of the next 19 points, tying the game at 54 following a three by Conley Garrison at the 11:28 mark.

From there, King answered with back-to-back threes and Mohab Yasser (Giza, Egypt) knocked down a pair of free throws, putting ETSU back up five, 62-57, with 9:31 showing on the clock.

Furman responded with five straight points and eventually took its first lead of the night when Bothwell laid one in, making it 64-63 with 7:46 remaining.

The game was tight down the stretch, but after dropping five close ones over the last two weeks, ETSU was ready to erase its demons.

After the Paladins went back up by one with just over five minutes to go, Ty Brewer tied the game at 68 by making the second of a two-shot foul and then put the Blue and Gold back ahead for the final time of the night, when again, he made the second foul shot with 3:01 remaining. Brewer then stepped up on the defensive end as he took a charge on Slawson – and after King missed a three on the ensuing possession – Ledarrius Brewer came up with a key defensive board.

Following a missed lay-up from Ledarrius Brewer, Seymour grabbed the offensive rebound and Brewer hit him underneath the hoop to score a clutch second-chance bucket, extending the lead to three with just over a minute to play. Like Ty did two possessions earlier, Seymour then took a charge on Slawson, forcing another Paladin turnover.

ETSU was unable to capitalize and Furman had chances, but Slawson missed a three and Garrett Hien grabbed the offensive rebound. The Paladins were unable to convert on the second-chance opportunity as Hien lost his balanced and was called for steps with 26 seconds left. Furman was forced to foul and Seymour stepped up with two huge makes, pushing the Buccaneer lead to five. ETSU then had fouls to give and Furman ran out of time as the Bucs secured a critical home conference victory.

ETSU wraps up the brief two-game home stand Saturday when the Bucs host Samford at 4 o’clock.