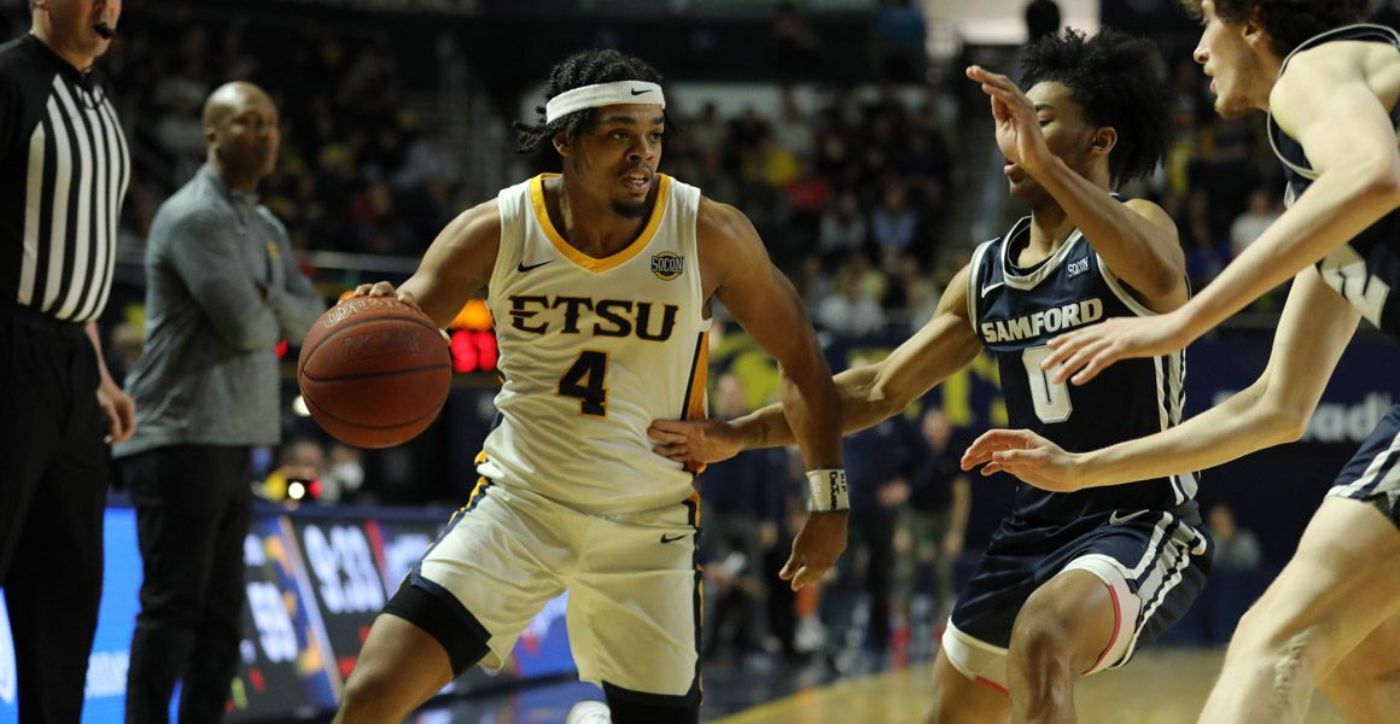 JOHNSON CITY, Tenn. (Feb. 12, 2022) – For the seventh straight game, ETSU men’s basketball had one come down to the wire. Unfortunately, for the sixth time the Buccaneers found themselves on the wrong end of the ledger, as ETSU dropped a 77-73 decision to Samford Saturday evening in front of 4,502 fans inside Freedom Hall.

ETSU was forced to play from behind the majority of the night as Samford jumped out to an eight-point lead six minutes in and led 22-13 with 11:05 remaining in the first half. The Bucs used a brief 6-0 run – highlighted by Jordan King connecting on three free throws after getting fouled from beyond the arc – to inch within three, but the Bulldogs answered with a 6-0 run of their own to go back up nine, 28-19, with eight and a half minutes left before intermission. ETSU ended the half with a little spurt, cutting an eight-point deficit to four, 42-38.

Both teams shot over 45 percent in the opening 20 minutes, while ETSU was plus-1 in made threes (4-3) and plus-5 in made free throws (10-5). Turnovers and second-chance points proved to be costly in the opening frame as the Bulldogs were plus-6 in points off turnovers, 9-3, and scored 13 points off nine offensive rebounds.

Samford grabbed momentum at the start of the second half as they saw its lead grow to 10, 41-31, following a hook shot in the paint by Logan Dye at the 16:18 mark.

The Bucs battled and tied the game at 51 as King and Ledarrius Brewer each knocked down threes with 13:40 remaining.

However, in a one-minute span, the Bulldogs responded and got back-to-back triples from Jaden Campbell to go back up six.

Again, the Blue and Gold rose to the challenge and fed off the crowd’s energy, as they mounted an 11-0 run to take their largest lead of the night, 62-57, after Charlie Weber (Owings, Md.) converted on an old-fashioned three-point play with 8:24 left in the contest.

Unfortunately, after being hampered with foul trouble in the first half, Glover got hot in the second as he scored seven of the next 10 Bulldog points to regain a 66-63 lead at the 6:17 mark. ETSU was able to pull even at 68 with just under five minutes remaining, but the Bucs just couldn’t get back over the hump.

Glover broke the tie with a jumper on Samford’s next trip down the floor, while ETSU had two empty possessions late where they were down by one in the final four minutes and couldn’t get the go-ahead bucket to fall. Each time the Bucs didn’t convert, Samford came down with a two-point score, extending a one-point lead to three – the final being 74-71 following another jumper by Glover with 1:03 remaining.