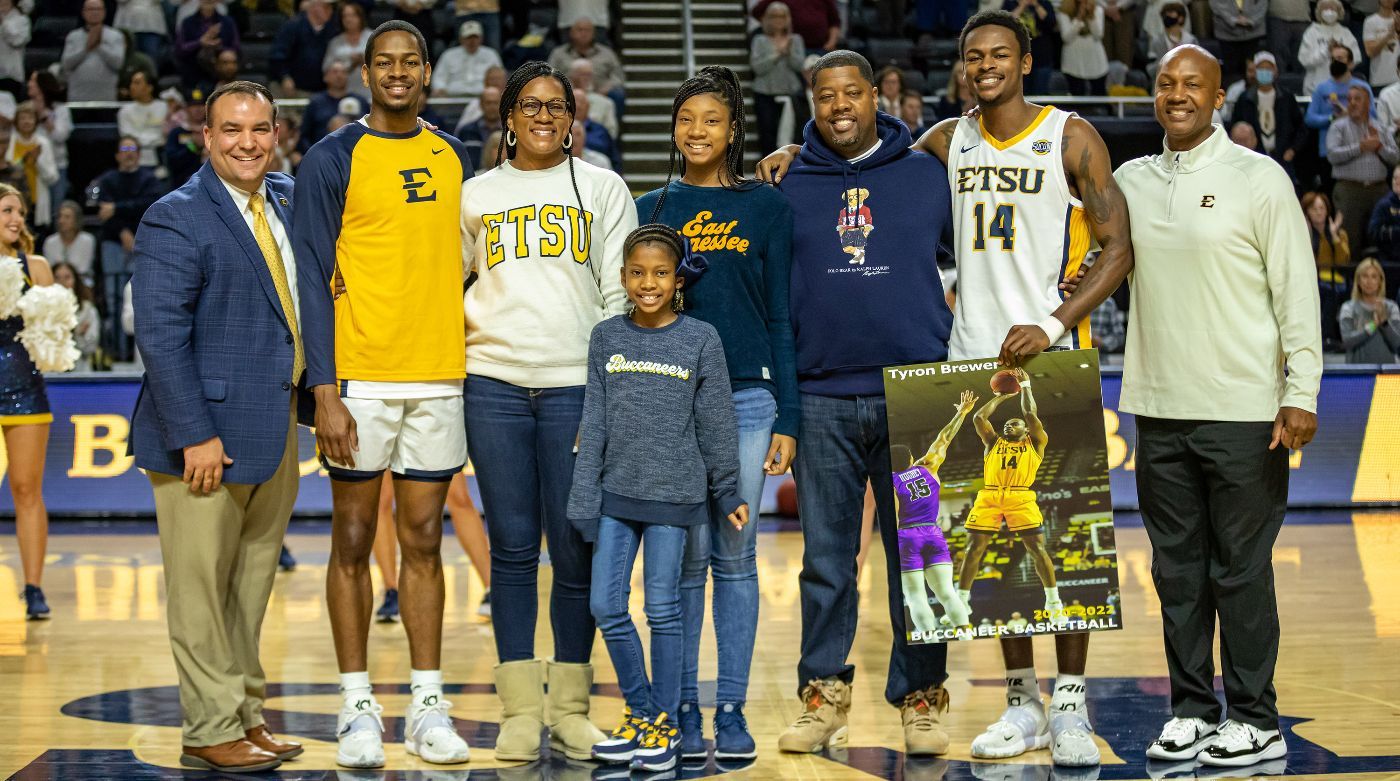 JOHNSON CITY, Tenn. (Feb. 23, 2022) – Down by 20 with 11:37 remaining, the ETSU men’s basketball team – playing with only six guys – cut the deficit to four in the closing seconds, but the Buccaneers’ comeback bid fell short as Chattanooga held on for the 83-77 win in front of 4,610 fans Wednesday night inside Freedom Hall.

Listen to comments from head coach Desmond Oliver with Voice of the Bucs Jay Sandos.

ETSU opened up getting threes from both Ledarrius and Ty Brewer, while King’s triple at the 15:34 mark put the Bucs ahead, 9-6. From there, King assisted on a Ty Brewer lay-up, giving the Bucs their largest lead of the night, 18-13.

Ledford provided frustration for Buccaneer fans as he scored 18 points in the first half, including a run where he hit five threes over a four-minute stretch to help fuel Chattanooga’s run.

ETSU started the second half inching within six, but Chattanooga opened its 20-point lead by scoring 18 of the next 22 points to go ahead 60-40 with 10:33 remaining.

With things looking like they were headed just like it did two months ago in the conference opener where the Mocs won by 30, the Buccaneers rallied together and continued to fight.

King ignited the surge with a three-pointer and ETSU turned up the pressure. The Bucs slowly chipped away and cut the 20-point deficit in half when Ty Brewer slammed home an offensive rebound, making it 76-66 with 2:01 showing on the clock.

ETSU then pulled within single digits at 78-70 with just over a minute to play and made it 81-77 following two made free throws by Ty Brewer with 17 seconds left. The Bucs were forced to foul and couldn’t complete the comeback as the Mocs made both free throws. ETSU missed a pair of threes in the closing seconds, allowing Chattanooga to hold on for the six-point victory.

ETSU concludes regular season play Sunday when the Bucs take on UNCG at 4 o’clock inside the Greensboro Coliseum. The game will be televised on CBS Sports Network.