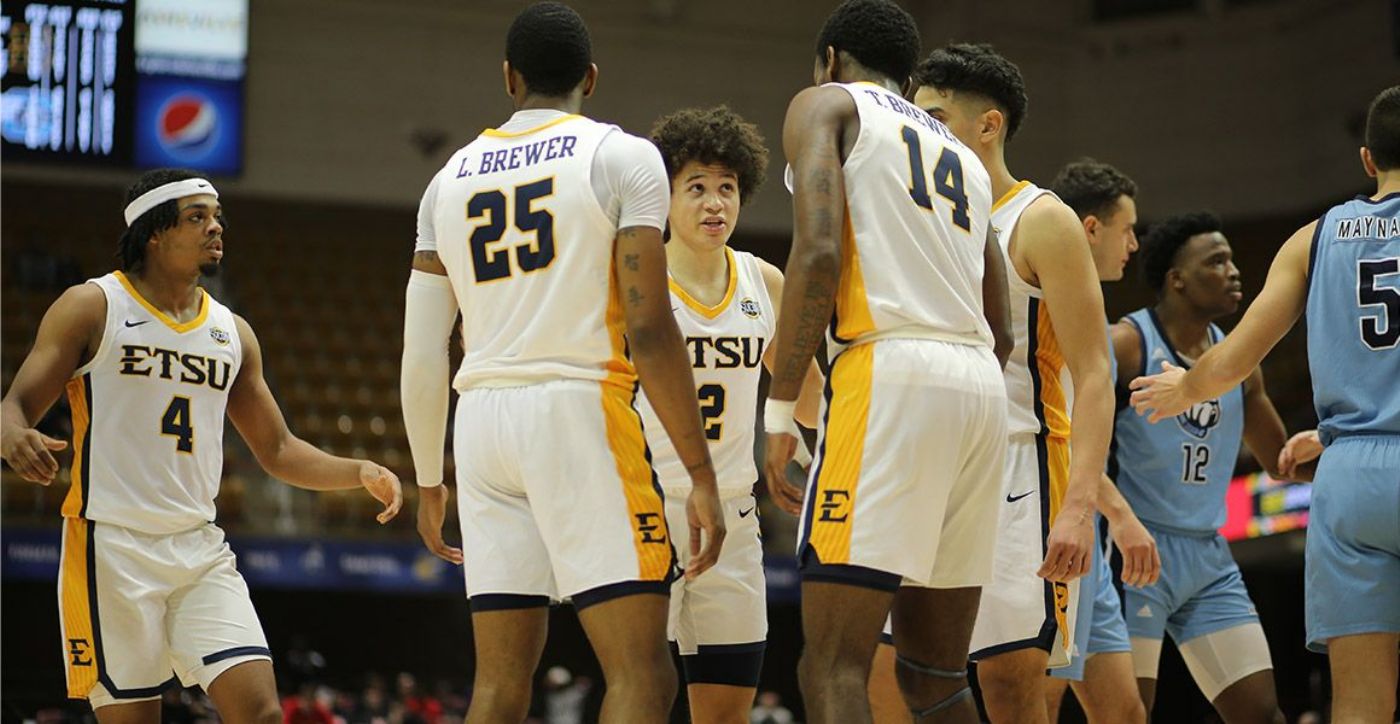 ASHEVILLE, N.C. (March 4, 2022) – Despite erasing a 10-point second-half deficit and taking a two-point lead with 14 seconds remaining, the ETSU men’s basketball team couldn’t hold on and keep its season alive.

Following an old-fashioned three-point play by Mohab Yasser (Giza, Egypt), the Citadel was able to draw a foul on the inbounds play, sending David Maynard to the line for the one-and-one. Maynard made both attempts to tie the game at 69 – and after Ty Brewer’s (Meridian, Miss.) open look at a three didn’t drop – the Bucs and Bulldogs were forced to play overtime.

ETSU, playing shorthanded as David Sloan (Louisville, Ky.) fouled out on the inbounds pass with 13 seconds remaining in regulation, saw The Citadel score the first six points in overtime, and hold on for an 84-76 win in the Friday’s opening round of the Southern Conference Tournament inside Harrah’s Cherokee Center Asheville.

The first half was tightly contested with six ties and five lead changes, but with the game tied at 34, The Citadel closed the final five minutes on a 12-4 run to take a 46-38 lead into the locker room.

After facing its largest deficit of the night at 48-38 in the opening minute of the second half, the Blue and Gold dug deep and fought back.

Over the next three-plus minutes, ETSU scored 11 of the next 13 points to pull within one when a three-pointer by David Sloan made it 50-49 at the 15:46. The Citadel again landed another punch as Hayden Brown scored the next five points to push the Bulldog lead back to six, but the Blue and Gold answered again.

The Bucs rattled off 10 straight scores to take a 59-55 lead when Ledarrius Brewer fed brother Ty for a dunk with just under 10 minutes left in regulation.

Again, the Bulldogs responded and regained a 62-60 lead following a layup by Tyler Moffe with 6:38 showing on the clock. The game remained tight down the stretch as ETSU pulled even at 62 and 64, but SoCon Freshman of the Year Jason Roche gave the Bulldogs a three-point cushion with 3:50 left.

ETSU rose to the challenge again and chipped away as Mohab Yasser scored the next five points of the contest, giving the Bucs a 69-67 lead with 14.5 seconds left in the second half. Unfortunately, ETSU couldn’t hold on as David Sloan fouled out with his fifth personal on the inbounds pass to Maynard and Ty Brewer’s open look didn’t fall at the buzzer.

With Sloan on the bench, the shorthanded Bucs ran out of gas as the Bulldogs scored the first six points of overtime and eight the first 10 to go ahead, 77-71. ETSU was able to pull within three when Jordan King converted on a three-point play with 38 seconds remaining, but the Blue and Gold couldn’t inch any closer.