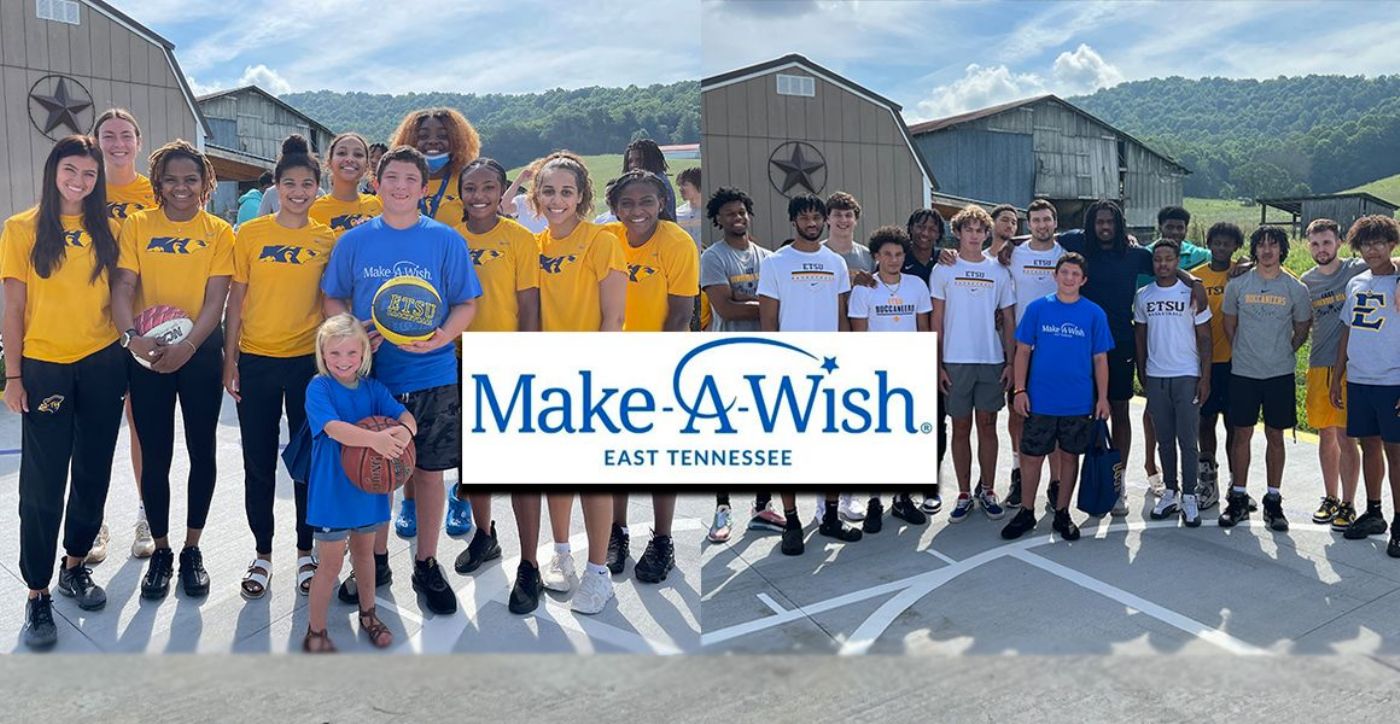 ELIZABEHTON, Tenn. (July 22, 2022) – The ETSU men’s and women’s basketball programs visited nearby Elizabethton on Friday to participate in a Make-A-Wish Celebration for Levi.

Levi is a 12-year-old boy who has been battling with a malignant brain tumor since 2019. Levi was taken to St. Jude for testing and treatment where they discovered that the tumor is inoperable. Levi goes in for routine doctor’s visits, has regular vision checks to make sure nothing else is being impaired and is on chemo twice a day along with taking other medications. An avid basketball fan, Levi was surprised with a basketball court, featuring a logo with his name in the Los Angeles Lakers colors.

“It’s been hard. When we first learned of Levi’s tumor it was an emotional rollercoaster,” said Levi’s mother Tammany Markland. “There have been a lot of ups and downs and then always having the unknown. Levi has handled everything so well and has the greatest team of doctors taking care of him. I have teared up a few times today seeing all of this support from the community and the ETSU basketball teams. The community has been amazing. It’s been awesome to see all of the support.

“We were shocked by all of the support. We don’t have a lot family so this support has been great. For people who don’t know you to come out and spend some time with Levi says a lot about how much they care about this community. It’s been emotional. To see Levi interacting with the players and see the players treating him like he’s part of the team is really special. Having these players come out and visit Levi has been his dream.”

For Levi, he was overwhelmed with the support by both men’s and women’s programs.

“I was excited when I heard about the teams coming out to visit,” said Levi. “I really love basketball. I was nervous at first because I have never met the players, but it’s cool to have them out here today. I am thankful that they took time out of their day to come play basketball with me.”

The Buccaneer basketball teams surprised Levi on Friday to join the celebration. The teams brought an ETSU Athletics gift pack for Levi and plan to invite him and his family to a game this season.

“Levi is a great kid. When we heard about his story, we wanted to come out here and be part of his special day,” said King. “We enjoyed seeing his new court. Having the Lakers logo with his name is awesome. They did a really good job on this court. We’ve been out here shooting hoops with Levi and we’re having a lot of fun. It’s really important to be out here giving back to the community. They do a great job supporting us day-in-and-day-out, so it’s fun when we can show our love back to the community.”

Courtney Moore and the women’s team also had fun playing games with Levi and showing their support.

“As a team, we love giving back to the community,” said Moore. “To know that Levi wanted this, and we were able to come out and support him, is a great feeling. When we first walked up you could see the excitement on Levi’s face and that was priceless. He was excited when he took his first shot and we were happy to be out here for him.”