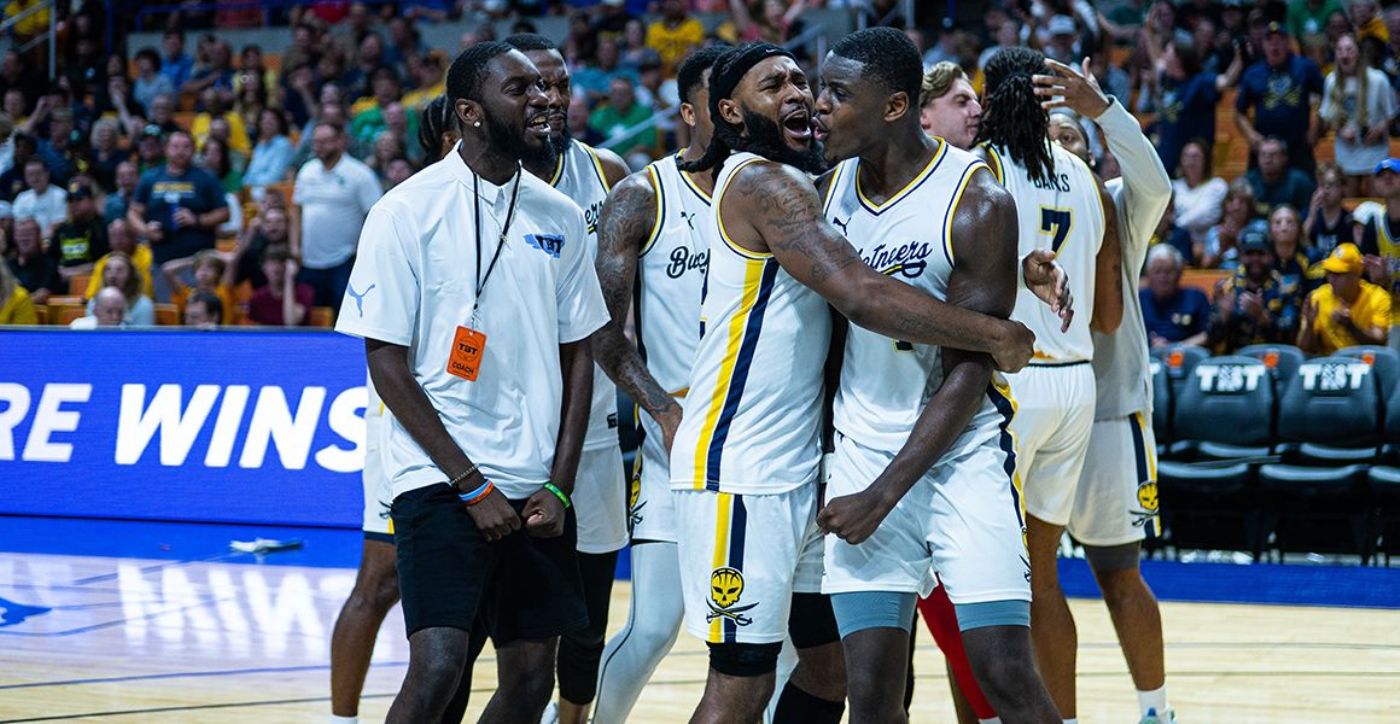 A year after taking down War Ready by 27 points in The Basketball Tournament (TBT) opener, the Bucketneers faced the Auburn alumni team yet again Tuesday night in the second round. Despite leading by as many as 16 points late in the third quarter and up by 15 with only a couple of minutes left before the Elam Ending came into to play, the Bucketneers held on for an 83-80 victory inside the Charleston Coliseum and Convention Center.

Five Bucketneers scored in double figures with Jalen Riley leading the pack with 14 points, including a 6-of-6 mark at the free throw line. As a team, the Blue and Gold went 16-of-18 at the charity stripe. Desonta Bradford, T.J. Cromer and Jordan Bowden all finished with 13 points and Nick Ward had his second straight 10-point performance.

“I am excited we got the win. We have a resilient group of guys who truly care for each other,” said head coach Joe Hugley. “I would like if we kept our composure more down the stretch. We can’t give up 29 points in the fourth quarter if we want to win this thing, but this tournament is all about surviving and advancing. We did that tonight, so I’m happy and ready to win another one tomorrow.”

If you missed it, @TBTBucketneers advanced to the Sweet 16 of the @thetournament... Check out the highlights from tonight's 83-80 win over War Ready! #ETSUTough pic.twitter.com/XjUYvhyy3s

The Bucketneers led by eight after the first quarter and took an 11-point lead into halftime, 44-33. Cromer led all players with 10 points in the first half, while Riley and Banks pitched in with nine points. Banks got off to a hot start as he scored the first seven points for the Blue and Gold.

In the third quarter, Bradford paced the Bucketneers with eight points as they turned to three-point shooting to see their lead grow to 16. The Bucketneers – who went 4-of-8 from long distance – held War Ready to 1-of-7 in the third stanza as the Bucs led by 16 points three different times. The final one came at 65-49 with less than a minute left in the third.

The Bucketneers looked to have things in control as they went ahead 75-60 following a lay-up by Ward with 6:27 remaining in the fourth quarter. However, things shifted as War Ready scored the next 11 points to pull within four (75-71), heading into the Elam Ending.

With the ending number being set at 83, Hodges scored the first bucket, putting the Bucketneers up, 77-71. Again, War Ready didn’t back down and inched to within one point twice down the stretch. Fortunately, the Bucketneers responded as Bradford connected on jumper, making it 81-78, and after a pair of free throws by Isaiah Williams of War Ready, Hodges followed up the missed lay-up for the game-winning tip-in – sending the Bucketneers into a frenzy.

The second-seeded Bucketneers now await the winner of No. 1 Best Virginia-No. 4 Herd That in Wednesday’s third round game. Tip-off is set for 7 p.m.

For more information on the Bucketneers and this year’s TBT, visit TheTournament.com.