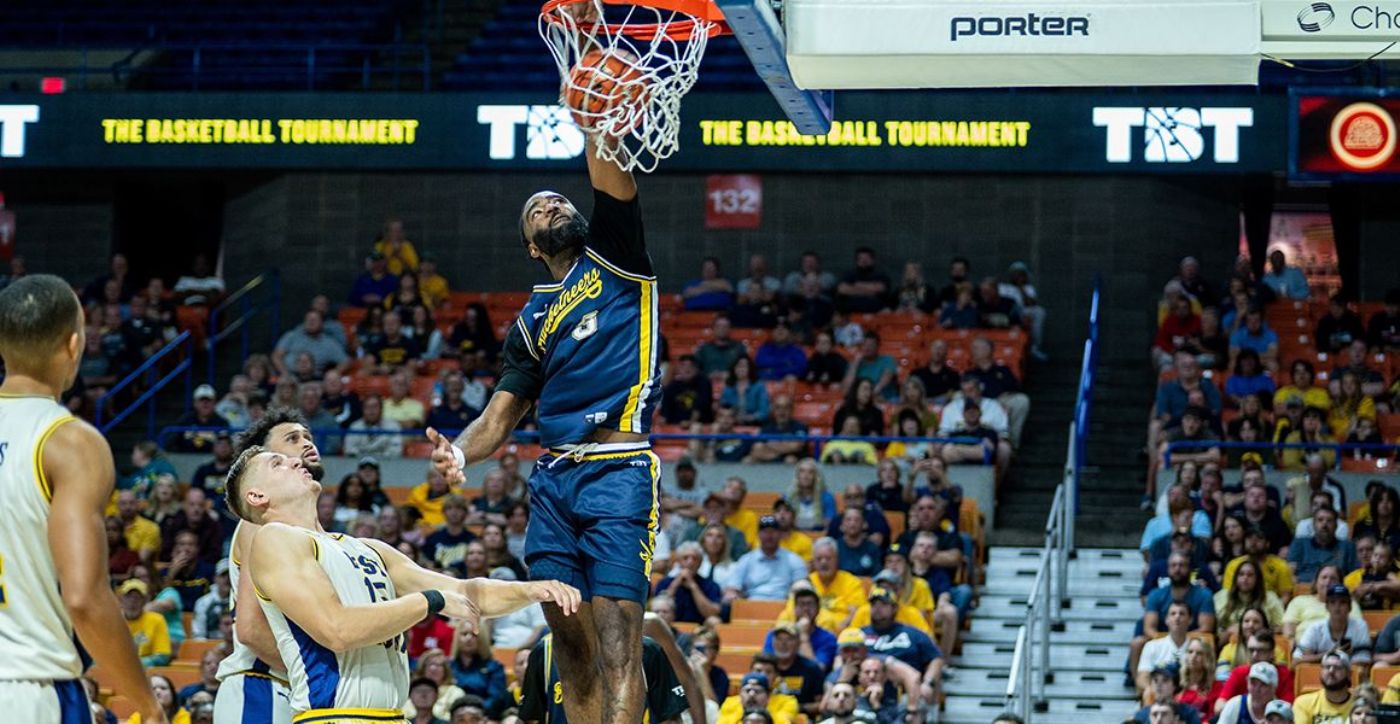 CHARLESTON, W.Va. (July 27, 2022) – For the second straight year, the Bucketneers’ suffered a heart-breaking loss in the Sweet 16 of The Basketball Tournament (TBT).

Playing without Jalen Riley – their second-leading scorer – the second-seeded Bucketneers fell to top-seeded Best Virginia, 63-62, in the third round of the TBT on Wednesday night inside the Charleston Coliseum and Convention Center.

Desonta Bradford netted a game-high 22 points and T.J. Cromer scored 13 of his 16 points in the second half, but after using a 7-0 run to go up one during the Elam Ending, Best Virginia’s Kevin Jones netted the game-winning jumper en route to lifting the West Virginia alumni team to the Elite Eight.

The Bucketneers felt the absence of Riley, who was averaging 13.5 points and 4.5 rebounds in the first two games of the TBT, as Best Virginia’s bench outscored the ETSU alumni squad by 24, 29-5. Both teams scored 22 points in the paint, while the Bucketneers turned 19 Best Virginia turnovers into 24 points.

The Bucketneers jumped out to a strong start as they scored eight of the first 12 points and led 11-10 following a Bradford three-pointer with just under four minutes to in the first quarter. However, Best Virginia mounted a 14-2 run to take their largest lead of the night, 24-13, in the early stages of the second quarter.

The Bucketneers, like all ETSU teams, fought back and clipped the deficit to four in the closing seconds of the half, but Jaysean Paige followed up the Cromer triple with one of his own before the buzzer, making it 33-26 at the half.

In the second half, the Bucketneers stormed out of the gates and used a 17-6 run over the first five-plus minutes of the third quarter to regain a 43-39 advantage, courtesy of a Cromer three-pointer with 3:41 left in the frame. The Bucketneers were held to just two points in the final 3:41 of the quarter and Best Virginia took a 46-45 lead into the fourth.

After falling behind by three twice to start the final frame, the Bucketneers went back ahead when Isaac Banks laid one home, putting the Blue and Gold up 53-51 at the 5:59 mark. The Bucketneers were unable to extend the lead and the teams were tied at 55 heading into the Elam Ending.

With the target score set at 63, Best Virginia rattled off the first six points to go up 61-55, but the Bucketneers didn’t back down. Following a pair of free throws by Cromer, the Bucketneers got another stop and Bradford knocked down his sixth triple of the night. The run continued and the Bucketneers took the lead when Banks corralled an offensive rebound and put one back home, giving the Bucs a 62-61 lead. Unfortunately, the Bucketneers couldn’t get one more stop and Jones ended the contest with the contested jumper in the paint, resulting in the one-point setback and another Sweet 16 loss.

With the win, Best Virginia advanced to the Elite Eight and take on Red Scare Friday night in Dayton.

For more information on the Bucketneers and this year’s TBT, visit TheTournament.com.