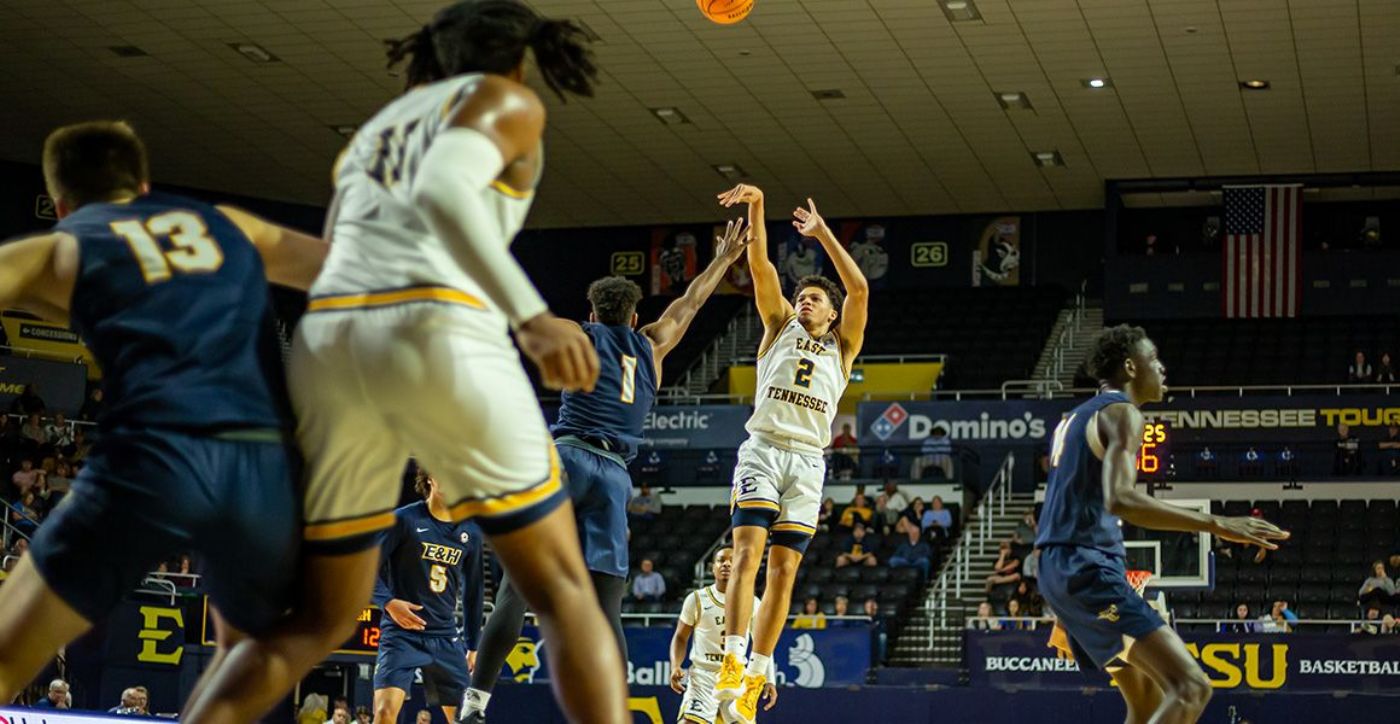 Bucs take on Elon Friday at 8:30 p.m.; Face Louisiana or Harvard on Sunday

ASHEVILLE, N.C. (Nov. 10, 2022) – The ETSU men’s basketball team has its eyes set on another MTE title as the Buccaneers make the short trek over the mountain to play in the Asheville Championship. ETSU opens play in the tournament Friday night when the Bucs take on Elon at 8:30 p.m. inside Harrah’s Cherokee Center Asheville.

ETSU is coming off an 88-66 win over Emory & Henry Monday night in the season opener … The Buccaneer bench provided 52 points as Justice Smith scored a game-high 20 points and Brock Jancek added 14 points and seven rebounds … The Bucs led wire-to-wire as the Blue and Gold went into the break up by 14 points and eventually led by as many as 24 (74-48), before cruising to the 22-point win … ETSU made 35 field goals and shot 46 percent from the field … The Bucs were plus-10 on the boards (44-34) and turned 26 offensive rebounds into 23 second-chance points, while also forcing 23 turnovers and cashing those miscues into 35 points.

BUCS LOOKING FOR ANOTHER MTE WIN

ETSU captured its fifth preseason title since the start of the 2016-17 season when the Bucs won the inaugural Naples Invitational last season … ETSU completed the “All State” run with wins over Murray State, Missouri State and Kent State … In 2016, the Bucs won the Sanford Pentagon Showcase in South Dakota with wins over Milwaukee, South Dakota State and UC Irvine, followed by winning the 2018 Sun Bowl Classic (wins over Wyoming and Norfolk State) and Cayman Island Classic Mainland (wins over Chicago State and Sam Houston State), and the 2019 Maui Invitational Mainland (wins over Delaware State and Southern Utah).

HOME AWAY FROM HOME

For the Buccaneer faithful, Harrah’s Cherokee Center is a home away from home … ETSU has had a lot of recent success inside this building as the Blue and Gold captured the Southern Conference Championship in 2017 and capped off their historic 30-4 season in 2019-20 with another SoCon title … Since 2015-16, the Bucs have played 17 games inside Harrah’s Cherokee Center Asheville with ETSU winning 12 of those contests, including the two league titles.

Through the first couple days of the season, ETSU’s 26 offensive rebounds are the most by any Division I team this season, while ETSU also ranks 22nd nationally in turnovers forced per game (23) and 35th in turnover margin (+10) … Individually, Justice Smith ranks 23rd in field goal percentage (.900) and Brock Jancek is 37th (.857) … Jaden Seymour and Josh Taylor both rank 40th in offensive rebounds per game (5.0).

It took one game in his new home for Brock Jancek to double up his career scoring total from his time at Tennessee … In 17 career games with the Vols, Jancek scored seven career points … In Monday’s 22-point win over Emory & Henry, Jancek finished with 14 points and seven rebounds in 23 minutes.

Justice Smith and Brock Jancek were nearly unstoppable on Monday night as they combined for 34 points on 15-of-17 shooting off the bench … In total, the Buccaneer bench scored 52 points and accounted for 20 of ETSU’s 35 made field goals.

NOTHING NEW FOR SMITH

Justice Smith’s 20-point performance was nothing new for the Buccaneer transfer … In his one season at Division II Mansfield University, Smith scored in double figures in 24 of his 28 games played, including 13 games scoring 20 or more points … In total, Smith scored 578 points at Mansfield, ranking second all-time in single-season history, while he also had a Mansfield single-game record 56 points against Bloomsburg on Feb. 2, 2022.

Friday’s game will also be broadcast on WXSM-AM 640 and 104.9 NASH ICON with Voice of the Bucs Jay Sandos on the call, starting with the Atmos Energy Pregame show at 8 p.m.

Live stats will also be available via StatBroadcast

Fans can purchase season tickets by calling the ETSU ticket office at 423-439-3878 or by visiting ETSUTickets.com

The winner of Friday’s game will take on the winner of Harvard-Louisiana in Sunday’s championship at 4:30 p.m. … The third-place game is scheduled for 2 p.m. … Both games will be televised on ESPNU.