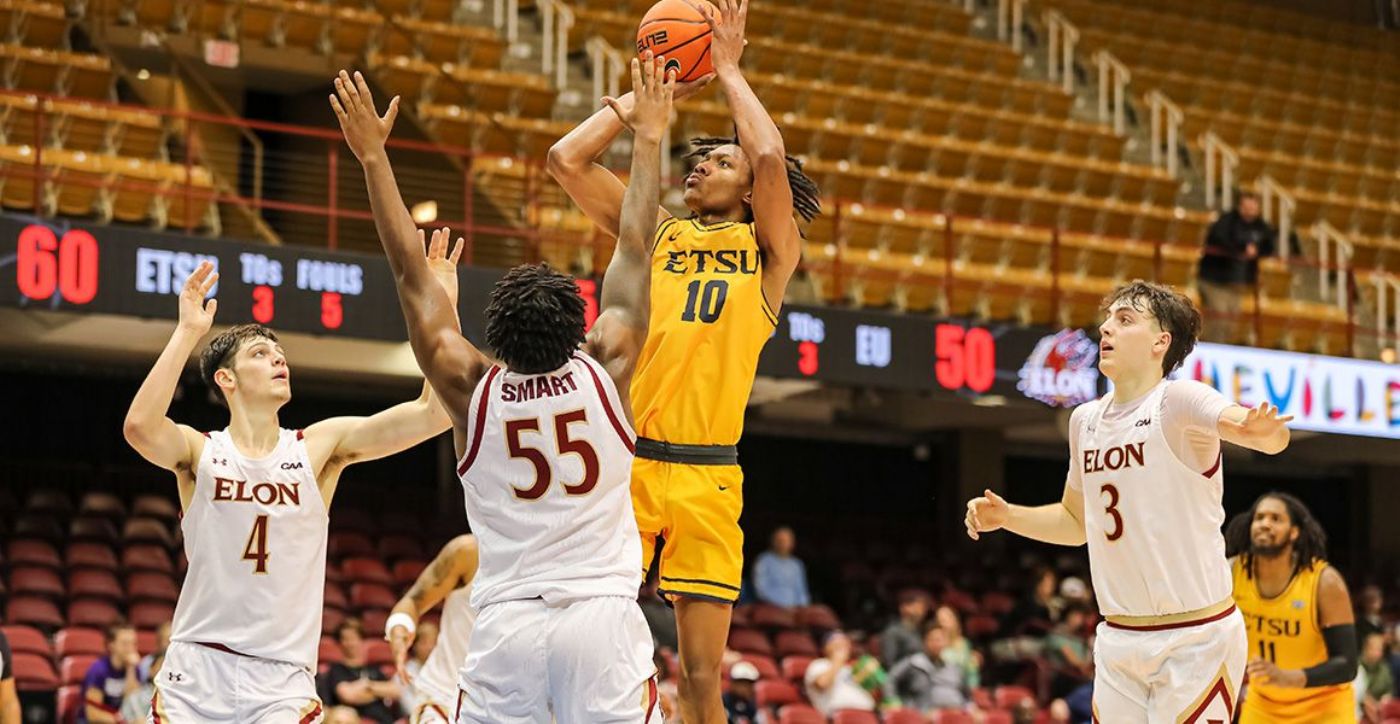 ETSU to face Louisiana in title game of Asheville Championship Sunday at 4:30 p.m. on ESPNU

ASHEVILLE, N.C. (Nov. 11, 2022) – The Buccaneers took the lead early and never trailed as ETSU men’s basketball enjoyed a 77-64 wire-to-wire win over Elon on Friday night in the Asheville Championship inside Harrah’s Cherokee Center.

The Bucs jumped out to a strong start by scoring the first five points and pushed the lead to 10, when King knocked down a deep three from the logo, making it 14-4, at the 16:16 mark. After extending the margin to 11, Elon scored the next eight points to make it 22-19 with 10 minutes remaining before the break.

ETSU never let the Phoenix pull ahead despite Elon cutting the deficit to two, as the Blue and Gold used an 8-0 run of their own to push the advantage back to 10, 37-27, following an old-fashioned three-point-play by Tipler with 1:47 showing on the clock. The Bucs carried momentum into the locker room as Jancek connected on a short jumper at the buzzer and ETSU led, 39-31 at halftime.

The Bucs shot 52 percent in the opening 20 minutes (15-29) and knocked down four of their nine attempts from beyond the arc. King led all scorers with 12 points, while the Buccaneer bench added 13 points – Tipler leading the group at eight points.

ETSU carried the wave of energy with them into the second half as they built a 15-point lead over the first four-plus minutes and went ahead 50-35 following lay-up by Haynes. During the next five minutes, Elon cut the deficit to seven, 53-46, with just over 10 minutes left to play, but ETSU never buckled and eventually pushed its lead back into double figures.

The Bucs built their largest lead of the night when Jancek found Taylor in the corner for a triple, making it 69-53, with just under four minutes remaining. From there, the rout was on and the Blue and Gold enjoyed the 13-point victory.

ETSU will face Louisiana in the championship game of the Asheville Championship Sunday at 4:30 p.m. on ESPNU.