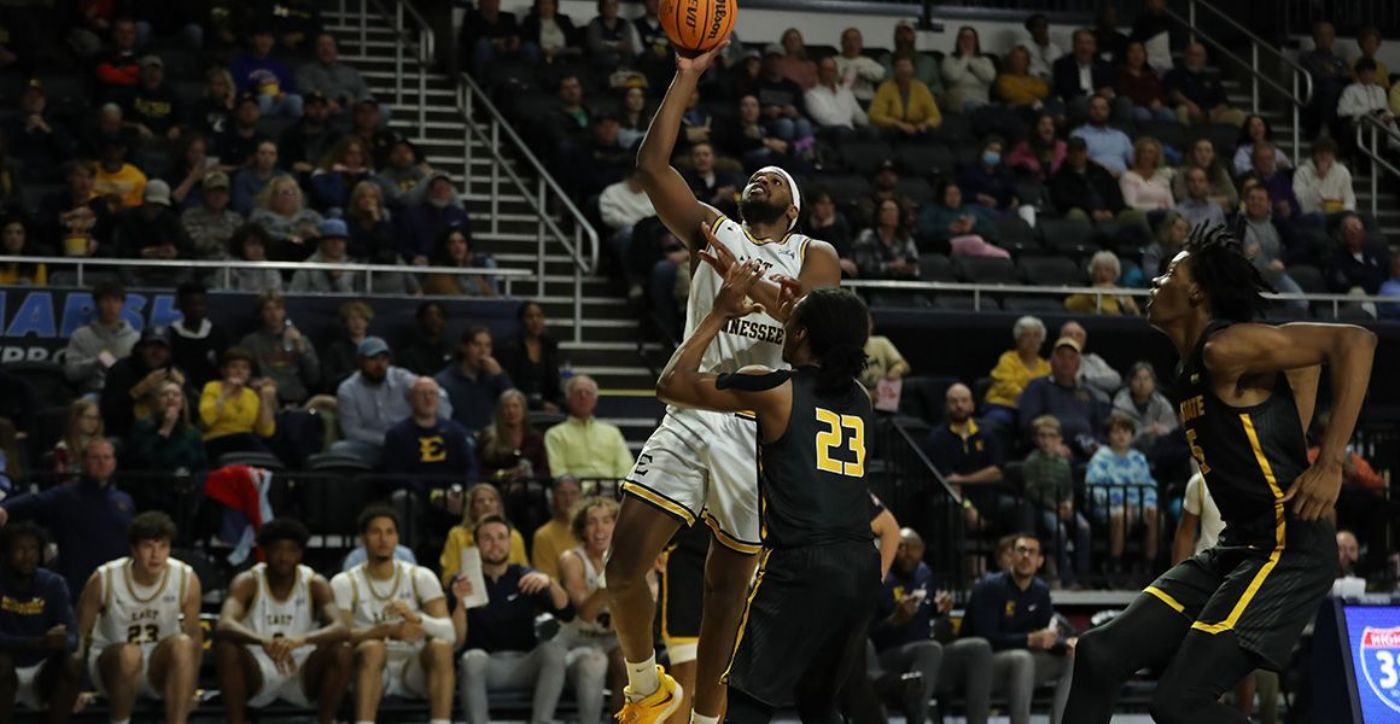 JOHNSON CITY, Tenn. (Nov. 23, 2022) – For the second straight year, ETSU and Appalachian State played a tight one down to the wire.

Unfortunately, the Blue and Gold again found themselves on the wrong side of the ledger, as the Bucs were edged by the Mountaineers, 74-70, in front of 3,825 fans Wednesday night inside Freedom Hall.

Appalachian State threw the first punch early as they scored the first five points and led 8-3 two-plus minutes into the contest. ETSU quickly responded with a 10-0 run to go up five, 13-8, following a hook shot by Haynes at the 13:26 mark. The Bucs eventually pushed the advantage to nine when Taylor found Strothers open for a triple, making it 22-13 with 9:09 left before the break.

The Bucs were unable to push the lead into double figures and the Mountaineers chipped away at the deficit by pulling even at 27 with 3:31 remaining in the stanza. Despite the Blue and Gold pushing their lead back to six in the final minute, Appalachian State scored the final five points and ETSU led 33-32 at intermission.

With the Mountaineers being plus-one in field goals made (11-10) and ETSU making one more three-pointer (6-5), free throw shooting was the biggest difference in the opening 20 minutes. The Bucs made seven of their eight attempts, while Appalachian State was five of eight.

ETSU led for the opening five minutes of the second half – going ahead by as many as five – but Appalachian State used a 13-3 run to regain a 51-45 lead with 12:10 remaining.

The Mountaineers continued to hold momentum and took their largest lead of the night at 62-52, but like we’ve seen from Buccaneers in this early season – they never back down.

Over the next four-plus minutes, ETSU scored 16 of the next 21 points, and went back ahead, 68-67, thanks to Taylor laying one in with 2:32 showing on the clock. The lead shifted hands on the next possession as Gregory was fouled and made both free throws, making it 69-68 with just over two minutes left.

After two empty Buccaneer possessions, the Mountaineers pushed their lead to three, but ETSU looked to have made the game-tying three-pointer with 12 seconds remaining. However, prior to Tipler getting his shot off, Gregory plowed through Haynes, resulting in the off-ball foul – sending Haynes to the free throw line for the 1-and-1. Haynes missed the front end of the bonus and Appalachian State corralled the defensive rebound. The Mountaineers made both freebies to go up five and iced the game.

ETSU hits the road to take as the Bucs eye a second straight win at Georgia on Sunday afternoon. Tip-off is set for 1 p.m. inside Stegeman Coliseum.