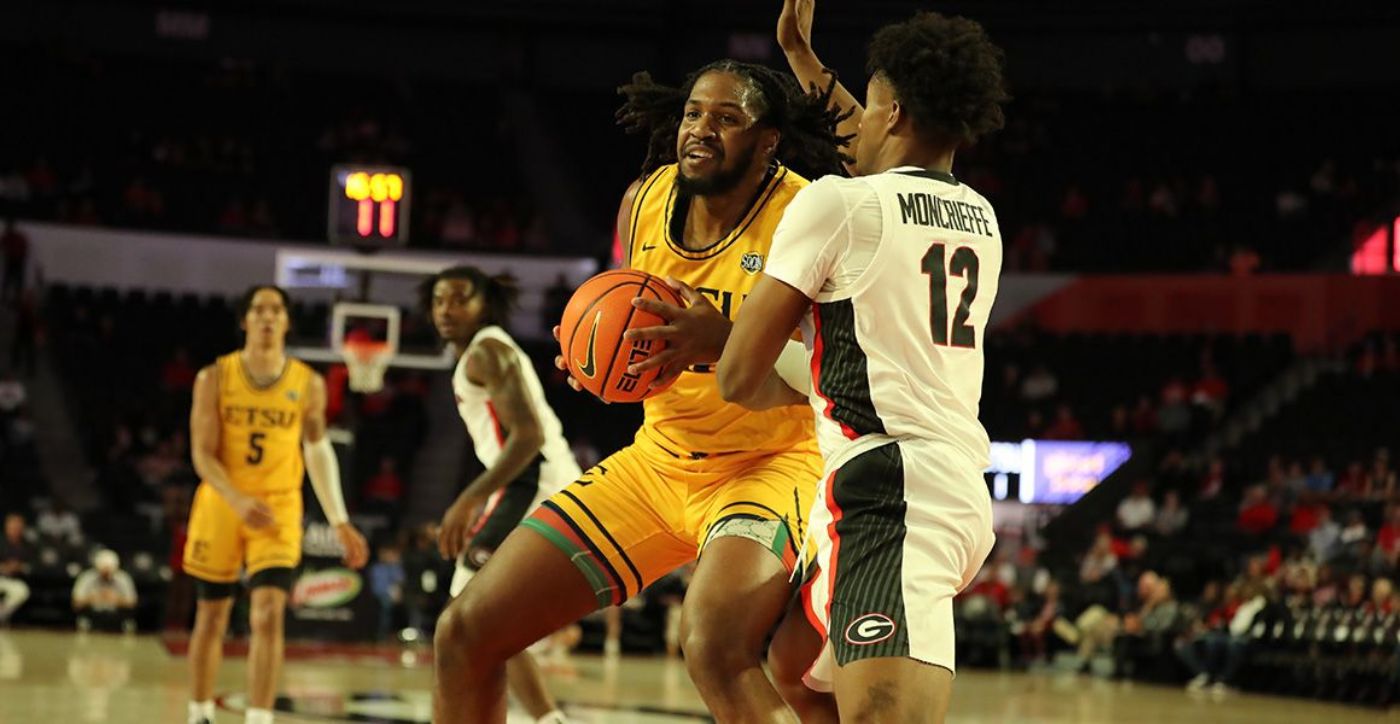 ATHENS, Ga. (Nov. 27, 2022) – Playing without two key bench players, the ETSU men’s basketball team ran out of gas in the second half as the Buccaneers fell at Georgia 62-47 on Sunday afternoon inside Stegeman Coliseum.

Without the services of guard DeAnthony Tipler (Ashland, Miss.) and forward Brock Jancek (Knoxville, Tenn.), the Buccaneers tied the game at 36 following a lay-up from Josh Taylor (Atlanta) early in the second half. That’s as close as ETSU would get as Georgia scored the next 12 points and held the Bucs to two made field goals over the final 15 minutes en route to securing the 15-point non-conference victory.

The Bucs, who have lost three straight games, moved to 3-4 on the season, while Georgia improved to 5-2. ETSU defeated Georgia a year ago in Athens, while the Bulldogs evened the all-time series at 3-3 with Sunday’s win.

For the first time this season, the Blue and Gold were outrebounded as Georgia finished plus-10 on the glass, 38-28. The Bucs were plus-six in the paint, 28-22, while the Bulldogs’ bench outscored ETSU, 27-2. Eleven of the Bucs’ 17 turnovers came in the second half, while Georgia scored 21 points off those ETSU miscues.

The first half was a game of runs as the Bulldogs used a 9-0 spark to take an early eight-point lead, while ETSU answered with 12 straight scores to regain a 13-9 advantage following a lay-up by Seymour at the 11:24 mark. After the Bucs went ahead 15-11, the Bulldogs rattled off 14 consecutive points to go back ahead 25-15 with 5:33 remaining in the half. ETSU chipped its deficit to three and trailed by four heading into intermission, 30-26.

In the second half, the Bucs were able to even the score at 36, but without a couple of key scorers, ETSU went cold and Georgia pulled away. The Bulldogs used the 12-0 run to go ahead 48-36, while the Bucs were only able to get within nine, when King knocked in the triple with 7:28 remaining. ETSU then went the next six minutes and twenty-six seconds without a field goal and the Bucs were unable to capture a win over a Power-5 opponent.

Georgia was led by Kario Oquendo’s 16-point effort as he went 4-of-8 from beyond the arc, while Justin Hill added 14 points, five rebounds and four assists off the bench.