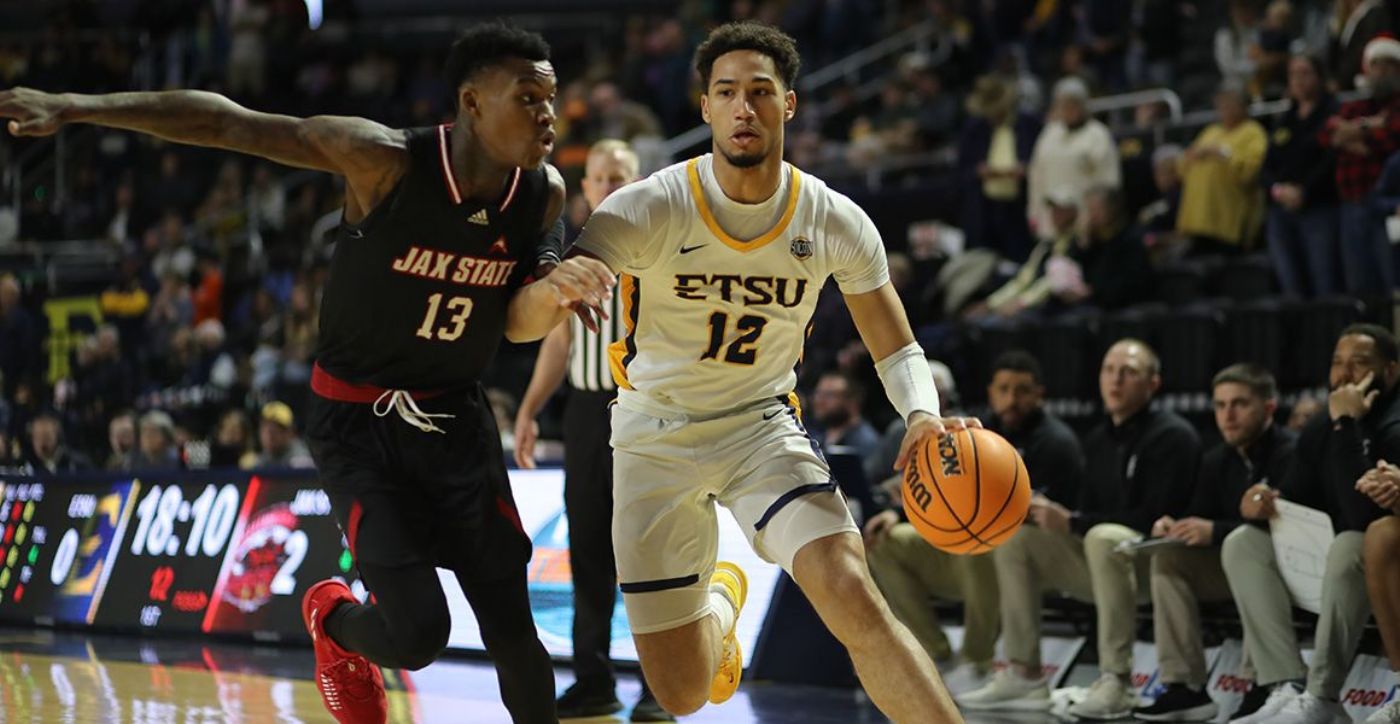 JOHNSON CITY, Tenn. (Dec. 3, 2022) – Despite leading by seven midway through the second half, the ETSU men’s basketball team couldn’t hold on as Jacksonville State hit the go-ahead three-pointer with 59 seconds remaining and the Buccaneers suffered a 63-61 setback to the Gamecocks on Saturday evening inside Freedom Hall.

After pulling within one on a Justice Smith (Lyons, N.Y.) baseline jumper with 43 seconds to go, the Bucs forced a turnover on a steal by Smith, but he stepped out of bounds with 19 seconds showing on the clock, forcing the Blue and Gold to come up empty. ETSU was forced to foul and Jacksonville State’s Skyelar Potter made one of two free throws, giving the Blue and Gold another opportunity. Unfortunately, Jaden Seymour’s (Charlotte, N.C.) open three-point look from the left wing couldn’t fall and Jacksonville State walked away with the two-point non-conference victory.

The first half was nip-and-tuck as neither team led by more than six points as there were three ties and two lead changes in the opening 20 minutes with the visitors leading 31-28 at the break.

The Gamecocks scored the first five points, but ETSU answered with a 14-3 run to go up by six (14-8) when Seymour found Smith for a turnaround jumper at the 10:52 mark. Then, with the Bucs ahead 17-13, Jacksonville State used an 11-2 spurt to regain a 24-19 advantage with less than four minutes before halftime. ETSU was able to tie the game at 28 in the final minute before Potter connected on a triple with 33 ticks left to take a three-point lead into the locker room.

The Buccaneer defense held Jacksonville State without a field goal for over eight minutes in the second half and ETSU built a 49-42 lead with 10:31 remaining in the contest.

The Gamecocks, who netted seven points at the free throw line during that drought, stopped the bleeding when Potter hit a three-pointer to pull within four (49-45) with just under 10 minutes remaining.

ETSU was able to go back up six on two different possessions, but with the Bucs ahead 57-51, Jacksonville State got back-to-back threes from Amanze Ngumezi to pull even at 57 with 4:34 showing on the clock. The teams then traded buckets to remained tied at 59 – and after a scoreless stretch of two minutes and 19 seconds – the Gamecocks broke the tie and led for good on Potters triple with 59 ticks left, 62-59.

Smith cut the deficit to one on his baseline jumper and then forced the steal with 32 seconds remaining; however, he stepped out of bounds 13 seconds later, giving the ball back to JSU. Following Potter making the first and missing the second free throw, ETSU had a look at the game-winning three, but Seymour’s attempt did not fall as the buzzer sounded.

ETSU will take the week off for final exams and return to action on Sunday, Dec. 11 when the Bucs travel to Kentucky and take on Morehead State. Tip-off is set for 2 p.m.