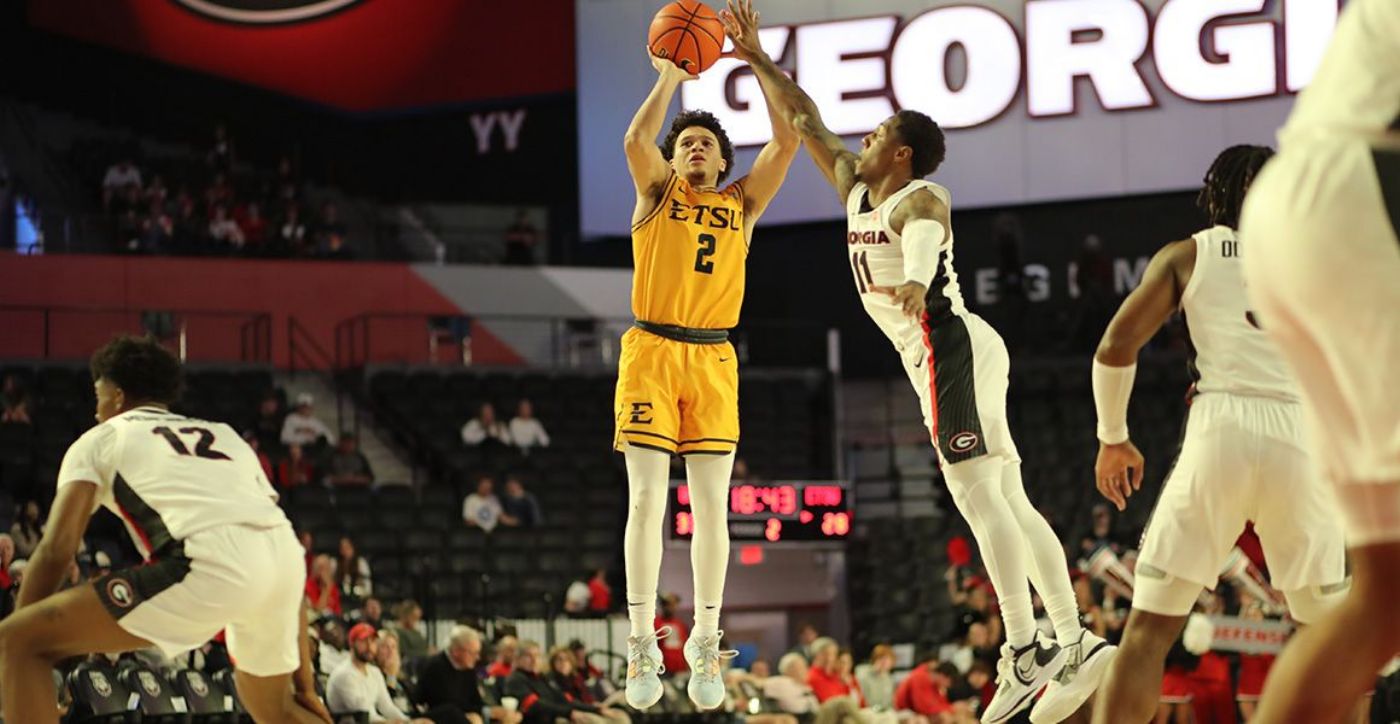 King becomes sixth Buccaneer to net 40 points in a game; tied for the third-most by an ETSU player

Jordan King (Albany, N.Y.) scored 42 points, becoming the sixth Buccaneer all-time to net at least 40, as ETSU men’s basketball cruised to a 96-74 victory over The Citadel on Wednesday night inside McAlister Field House.

King, who scored the Bucs’ first 11 points to start the second half, was 14-of-19 from the field and 8-of-12 from beyond the arc. The 42 points are tied for the third-most in ETSU single-game history, while marking the 10th time a Buccaneer has scored at least 40 in a game. This season, the 42 points are tied for the sixth-most by a Division I player. The 42 points were the most given up by The Citadel since Marshall’s Skip Henderson went off for 55 in 1988, while it’s the most points by a Southern Conference player since Furman’s Jordan Lyons had 54 against North Greenville on Nov. 15, 2018. It’s also the most points by a SoCon player against a Division I opponent since Wofford’s Fletcher Magee scored 45 against Chattanooga in February 2018.

King, who scored 10 points in the first half, saw his Bucs net the first four points and the Blue and Gold never looked back.

The Citadel cut the deficit to one on four different possessions, but with ETSU ahead 22-21 midway through the first half, the Bucs used a 13-1 run to open a 13-point lead when Seymour finished off the traditional three-point-play, making it 35-22 with 4:28 left before halftime.

ETSU eventually led by as many as 16 points in the opening 20 minutes and took a 42-28 advantage into the locker room.

King was 3-for-5 from the field in the first half, while ETSU made 15 field goals and went 9-of-10 at the free throw line.

The Bucs came out possessed in the second half as they made their first nine shots – King scoring the first 11 points – and ETSU saw its lead soar to 24, 63-39, when King forced a steal and laid one home at the 14:57 mark.

With the Bucs burning down the nets and having fun, The Citadel had one last run in them as they used a 22-7 surge to cut the margin to nine, 70-61 with 8:16 remaining.

ETSU put a stop to the run and pushed its lead back into double figures when Allen Strothers (Newport News, Va.) made a beautiful feed to Taylor for a dunk and the Bucs led 76-63 with just over five minutes left to play.

The closest the Bulldogs would get was 11 and King then put the game on ice as he scored 14 points in the final three and a half minutes, including banking in a corner three where he got fouled and converted the four-point play in the closing minutes.

The Bucs head home to host Mercer on Saturday at 4 p.m. inside Freedom Hall. Saturday is a doubleheader as the Buccaneer women host Samford at 1 p.m. Fans can purchase one ticket to watch both games by calling the ETSU Ticket Office at 423-439-3878 or by visiting ETSUTickets.com.