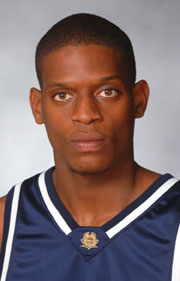 About Dequan: A distribute first, score second point guard … has the ability to make other players around him better … already has the physical build of a collegiate player. High school: Wrapped up an impressive high school career by helping lead his Shelbyville Central High squad to the Tennessee Class AAA state championship game in 2006 … in that contest, Twilley scored 31 points, including a 3-pointer in the final seconds that sent the game into overtime … possessing good vision and passing skills, Twilley finished his high school career as Shelbyville’s all-time leader in points (1,959), assists (607) and steals (258) … a first-team all-state selection by the Tennessee Sports Writers Association and the Associated Press, he averaged 18.9 points and five assists per game his senior season, earning recruiting looks from Tennessee, Purdue, Mississippi State, Tulane and Chattanooga. Personal: Majoring in Sports Management … son of Samual and Tanya Twilley … born . Coach Bartow’s Evaluation: “Dequan is a consummate point guard. Obviously, with Tim (Smith) leaving us, we felt we needed another point. Dequan is a pass first, score second point guard, but he has the ability to score the ball as evidenced by his 31 in the state championship game. He’s really looking to lead a team and get his teammates involved. He was a big piece of the puzzle for us.”