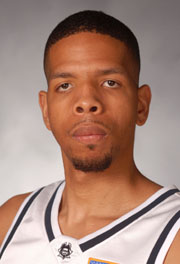 About Kenyona: A player with quality skills and a great feel for the game ... able to score from anywhere on the floor ... a long 6-foot-8 player. 2006-07: Had his best career game against Mercer (2/24), setting personal bests for points (24), field goals (7), field goals attempted (13), 3-point goals (6), 3-point goals attempted (9), free throws (4), rebounds (7), blocks (1) and minutes played (28) ... returned to action against Kennesaw State (1/17) after missing the Jacksonville and UNF game due to a family tragedy ... scored five points in 17 minutes of action against Campbell (2/5) ... netted six points on a career high two 3-pointers in the win over Lipscomb (1/27) ... scored seven points off the bench on 3-of-5 shooting in the win over Campbell (1/9) ... missed the Belmont (1/2) and Lipscomb (1/4) games with a minor foot injury ... scored eight points and grabbed three rebounds in the loss to Tennessee (12/30) ... set or matched career highs in several categories against Vanderbilt (12/5), including points (9), field goals (3), field goals attempted (7) and minutes (20) ... matched his then career high for minutes (15) and scored five points in the loss to Sam Houston State (11/24) at the South Padre Island Invitational ... had a career high seven rebounds in the loss to Auburn (11/19) ... played a career high 15 minutes and picked up his first block in the win over Chattanooga (11/15) ... appeared in his first game since returning from a medical redshirt season, scoring seven points in 14 minutes of play against UVa.-Wise. 2005-06: Was granted a medical redshirt after playing in only five games … considered one of the most skilled players on the team and has looked impressive in preseason workouts. Prior to ETSU: A highly recruited prep player out of Smyrna High School who earned rankings as the state’s third-best player from various recruiting services following his junior year, he spent the last two seasons at Neosho County Community College in Chanute, Kan. … Averaged 17 points and grabbed six rebounds a game as a senior, and was selected first team all-district and all-region in high school … a second-team all-state pick, he played in the Tennessee East-West Boys All-State Game … at Neosho, Swader averaged 12 points and six rebounds, shooting 55 percent from the floor and posting a 27-point game in his team’s season opener ... a second-team All-Jayhawk Community College Conference pick. Personal: Majoring in Interdisciplinary Studies... son of Andrew Malone and Angela Swader ... born September 4, 1984.