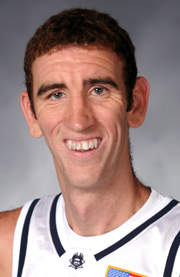 About Seth: A player who brings obvious size and an inside presence to the lineup … has good hands and passing skills for a center, and can also score the basketball … played alongside one of the nation’s top recruits in high school, UNC signee Tyler Zeller. High School: Helped lead his Washington High team to an Indiana Class 3A state championship, averaging 13.6 points and 9.8 rebounds a game during his senior year … along with averaging a near double-double his senior season, he enjoyed some impressive individual games, scoring 33 points and tying the school record for rebounds in a game with 26, while also putting together a 20-point, 16-rebound performance in the state championship contest … shot 67 percent from the floor, which ranked as the fourth best percentage in school history. Personal: Major is Elementary Education ... son of James Coy and Rhonda Gray … born Sept. 7, 1989. Coach Bartow’s evaluation: "We’re really pleased to have Seth joining our program. We obviously had a need for a big man inside and Seth’s size is certainly a positive for us. He’s played alongside one of the country’s top recruits and we believe he has a great upside and potential."