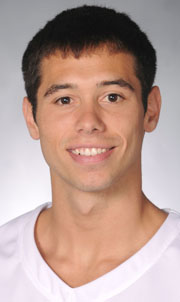 About Bruce: A heady guard with the ability to be a pinpoint shooter with extreme accuracy … built reputation in high school as a player that could put up huge numbers scoring … gritty, hardnosed, tough point guard from the Hoosier state. High School: A four-year starter at Rochester High School, was a first-team all-conference selection and team MVP his final three season … in fact, was named runner-up for the state’s Mr. Basketball award, while later being named the state’s player of the year by Hickeryhusker.com … averaged 26.9 points, 5.8 assists, 4.8 rebounds and 3.8 steals a game his senior year, and posted a sterling 40-point effort in the Class 3A finals en route to being named the tournament MVP by The Associated Press … shot 76 percent from the foul line and 37 percent from 3-point range for the year. Personal: Major is undecided … son of Bruce Grimm, Sr. … born June 20, 1990. Coach Bartow’s evaluation: “Bruce is just tough – gritty. When you think about a prototypical Indiana point guard, he fits that mold. He’s great at anticipating on defense and shoots the ball very well. And maybe most importantly, we think he has the ability to a real team leader for us.”