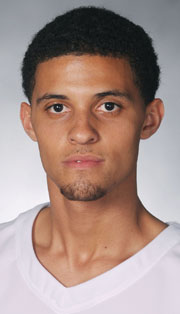 About De’Shaud:A tough, heady point guard with a willingness to play physically on the perimeter … earned his spot on the roster as a walk-on after spending two seasons at King College … was a valuable contributor to the Bucs a year ago in practice.2009-10: Had a field goal in the loss to Kentucky (3/18) ... scored two points and gave the Bucs a lift off the bench late in the first half during the win over FGCU (2/4) ... played a career-high 11 minutes against Belmont (1/23), scoring two points ... had a critical 3-pointer and played a solid four minutes helping the Bucs rally against Mercer (1/9) ... scored his first two points at ETSU, playing a career-high eight minutes against Morgan State (11/19) ... played in his first collegiate game against Appy State (11/14), getting two minutes of floor time. Prior to ETSU: Played two seasons at King College, earning MVP honors at the Appalachian Athletic Conference Tournament … averaged 12 points, three steals and five assists for the Tornado as a sophomore. High School: Helped guide Tennessee High School to the state tournament and holds career records in steals and assists for the Vikings … scored over 1,500 points during his prep career, averaging 18 points, four steals and six assists as a senior. Personal: Majoring in Finance … son of Tracy Shelley and Tara Johnson … born Sept. 19, 1987.