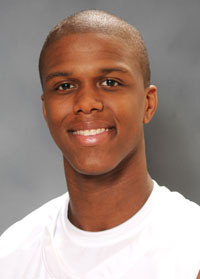 About Ryan: Highly decorated prep player with traditional point guard skills … has impressive offensive talents, while also able to distribute the ball and make those around him better. 2010-11: Did not play and took a medical redshirt. High School: A 2010 McDonald’s All-America nominee and was a 1,000-point scorer during his prep career, averaging 26 points, six assists and five rebounds as a senior for Lynn English High School … he was a  North Eastern Conference All-Star and a Boston Herald Dream Team selection the past two seasons … was also named the North Eastern Conference’s most valuable player as a junior … other accolades include being named the Lynn English Student Athletic Award recipient, and selection to the All Boston FOX Channel Top 25 Boys Team … he helped lead his team to a 23-2 record as a senior. Personal: Major is criminal justice... son of David and Vanessa Steed-Woumn … born Nov. 12, 1991.