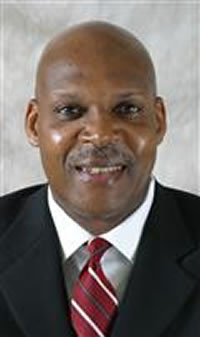 Veteran coach Thomas Johnson enters his third season on the Buccaneer bench, having replaced longtime assistant Will Bailey prior to the start of the 2010-11 season.

Johnson, who was entering his third season at Samford prior to leaving that post in the fall of 2010, also worked for Bartow at UAB for four seasons during the late 1990s, and spent two seasons on the bench at MTSU from 2006 to 2008. He also possesses strong recruiting ties in Memphis, having spent over 20 years as a high school coach in both Tennessee and Alabama.

“We are very pleased to have Thomas join our staff and think he will bring a great deal of experience to our program,” Bartow said. “Loyalty and trust are very important factors when hiring a new coach, and having worked with Thomas in the past at UAB and watching his career develop, I know that he will be able to fit into the chemistry of our staff. He brings many years of experience to the floor both as a high school and college coach, and his time in the Memphis area will only strengthen our recruiting in that part of the state.”

After spending two seasons as the top assistant coach under Kermit Davis at Middle Tennessee State University, Johnson came to Samford at the start of the 2008-09 season. A staunch recruiter, Johnson was part of an MTSU staff that landed a 2007 signing class rated No. 1 in the Sun Belt and No. 48 nationally by Hoop Scoop, as well as the No. 13-rated class among the nation’s mid-major programs by Rivals.com. Before his time at MTSU, Johnson logged more than 20 years as a high school coach in Alabama and Tennessee.

He overhauled the Wooddale High School program in Memphis, Tenn. Prior to his arrival, the school endured an 0-23 season in 2001–02, but it enjoyed four straight seasons of 22 wins or more in his four years there, including a 24-9 mark in 2002–03. For his efforts, Johnson was named the District 15-3A Coach of the Year in 2002–03 and the Commercial Appeal Co-Coach of the Year. Wooddale, which enjoyed a 94-36 record and three seasons of 24 wins, won the district championship in 2005–06 and finished second in the district twice. The program reached the Region 8-3A semifinals every year.

Johnson spent four years on the staff at UAB under Bartow, helping lead the Blazers to three winning seasons and an NCAA Tournament berth. The Blazers won the Conference USA National Division championship during the 1998–99 season.

Johnson played college basketball at the University of Montevallo and graduated with a bachelor of science in physical education. He has two daughters, Adrian, 32, and Katie, 24, and two sons, Marques, 29, and Caleb, 17.