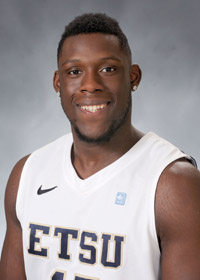 About Ron: Had to sit out the 2012-13 season after transferring from Big East Conference member Providence in the summer of 2012 … provides a physical presence for the Bucs on the inside … his biggest strengths are his ability to rebound and defend the post. 2013-14: Played a career best with 12 minutes of action and five points in the win over Tusculum (12/16) ... scored his first two points as a Buccaneer and grabbed a season high three rebounds in five minutes of play at Georgia Tech (12/7) ... made his first appearance on the court this season, playing two minutes in the loss to Tennessee Tech (11/27) ...  missed the first six  games of the year after ungoing open-heart surgery during the preseason. Prior to ETSU: Played for the Friars the last two seasons … his sophomore year, he played in 26 games and started in 12 contests … averaged 1.3 points and 2.0 rebounds a game, shooting 46 percent from the floor … during his prep career he averaged 18 points and 13 rebounds at Notre Dame Prep, helping his team finish the 2009-10 season ranked fifth in the country. Personal: Major is undecided … son of Jefferson  and Esther Giplaye… born Sept. 14, 1990.