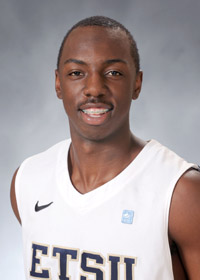 About Devin: A lead guard who is both a great facilitator and scorer … a complete student-athlete with great potential to be a major contributor. 2013-14: Playing extra minutes in replace of an injured Petey McClain, Harris scored a career high 10 points and grabbed four rebounds in the loss to FGCU (3/6) in the Atlantic Sun Tournament semifinals ... Harris went 2-of-3 from the floor, scoring four points, grabbing three rebounds and collecting three steals in 10 minutes of play in the quarterfinal win over Lipscomb (3/4) ... set then career highs  for points (6), free throws (2), rebounds (5) and assists (3) in the loss to FGCU (1/18) ...  played a productive game as a Buc in the win over Northern Kentucky (1/11), scoring five points, hitting a 3-pointer, grabbing two rebounds and dishing out three assists ... collected four points in the loss at Mercer (1/6) ... had two steals and scored two points in the win over Tusculum (12/16) ... scored his first two points as a Buccaneer and grabbed two rebounds in the loss to Georgia Tech (12/7) ... made his first career start in the loss to Winthrop (11/19) ... played a career high 20 minutes in the loss to Western Kentucky (11/16) ... made his collegiate debut at Charlotte (11/8), grabbing three rebounds and picking up an assist in 11 minutes of play. High School: Averaged 15.5 points, six rebounds and five assists, while shooting 76 percent from the foul line during his senior year at Jesuit High School … led his team to a Florida Class 5A state championship … has a strong basketball lineage, as his brother Ramon played at Kentucky from 2006-10 … played high school basketball under head coach Neal Goldman at highly-successful Jesuit. Personal: Major is Mass Communications … son of Eric and Barbara Harris … born Sept. 16, 1995.