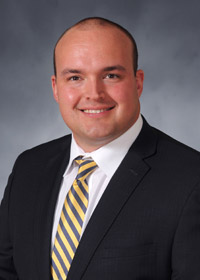 Mark Richmond is in his second season with the ETSU men’s basketball program, having joined the Buccaneers as the Director of Basketball Operations in November of 2013.

Prior to coming to Johnson City, Richmond was an Assistant Coach at the University of Charleston (WV) for Mark Downey. Richmond spent three seasons at UC, helping rejuvenate a program rich in tradition.  While at Charleston, the Golden Eagles were consistently ranked in the national top 25 polls. UC defeated the #1 team in the country in January 2013.

Richmond also spent two seasons as an Assistant Coach at Centenary College in Shreveport, Louisiana for Greg Gary.  While at Centenary, Richmond assisted in all aspects of the program including recruiting, on-floor coaching, organizing summer camps, monitoring the team’s strength and conditioning program, and assisting with all the general day-to-day operations for the Gents, who competed in the Summit League.

In addition to his five years of coaching experience at the Division I and II levels, Richmond has also worked summer camps at WVU, Maryland, Villanova, Virginia, Kentucky and Duquesne University.  He also served as Camp Director at the University of Charleston and Centenary.

Richmond is a 2004 graduate of Martinsburg (WV) High School, where he was a standout athlete in basketball, baseball and football for the Bulldogs.  He is the son of Tim and Cheryl Richmond and has a sister Kara that still live in Martinsburg, WV.