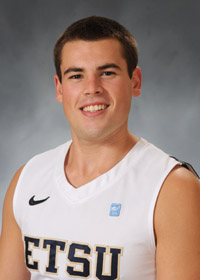 About Tyler: A walk-on transfer from Walters State Community College, who also spent time at Alice Lloyd College in Kentucky ... played his high school basketball at nearby Dobyns-Bennett High School in Kingsport … joins fellow D-B players Todd Halvorsen Adam Denison on the ETSU roster. 2013-14: Played in two games during his junior season, average two minutes a contest. Prior to ETSU: Played at both Alice Lloyd (Ky.) College and Walters State Community College before coming to ETSU ... Averaged five points a game at Alice Lloyd, and averaged 7.5 points, 3.5 rebounds and 2.5 assists per game at Walters State ... helped Walters State advance to national championship tournament, and was 5-of-5 from the field and 2-of-2 at the line to net 15 points against No. 2-ranked Coffeyville ... during his prep career he was an all district and all-region player, helping Dobyns-Bennett advance to the Class AAA state tournament ... shot 42 percent from 3-point range and average over 15 points a game as a senior at D-B. At the National Championships in Hutchinson KS, Tyler was 5 for 5 from field, 3 for 3 from 3pt range % 2 for 2 from the line against #2 ranked Coffeyville. Personal: Major is accounting … son of Jim Ailshie and Luci Gage … born Sept. 29, 1993.