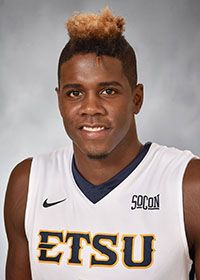 About Hanner: A tremendous athlete who will provide superior athleticism to the Bucs' inside game ... possibly the most highly decorated recruit in program history ... a talented shot blocker with an "above the rim" game. 2015-16: Sat out the season for NCAA transfer rules. Prior to ETSU: Played the last three seasons in the Big 10 Conference at Indiana University and will be required by NCAA rules to sit out the 2015-16 season ... will be eligible for his senior season in 2016-17 ... during his junior year at IU, he played 19.5 minutes per game, averaging 6.5 points and 2.7 rebounds to go with a team-high 33 blocks for the Hoosiers. ... as a senior in high school, Mosquera-Perea was the No. 9 rated power forward in his class and the overall No. 43 rated recruit in the nation according to Rivals.com, making him likely the most decorated recruit in ETSU program history. ... over his three seasons at Indiana, he averaged 11.2 minutes per game, while also netting a total of 265 points, 202 rebounds and 51 blocks with the Hoosiers. ... he also shot over 57 percent from the floor and 61 percent from the foul line during his time in Bloomington. Personal: Major is Interdisciplinary Studies … son of Hamilton Mosquera Murillo and Liz Amanda Perea Martines ... born January 29, 1993.