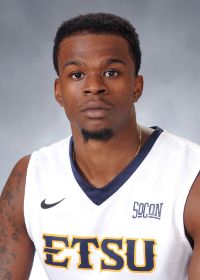 About Ge'Lawn: An experienced, strong guard who will make an immediate impact ... known as an impressive defender, as well as a scoring threat on the offensive end of the floor ... has competed at the high major level and was highly recruitied out of high school. Prior to ETSU: Was a three-year contributor for the Cincinnati Bearcats, playing in over 100 games during his career and starting each of the team’s 34 contests during his junior season in 2013-14 ... Guyn left the program following an injury during his senior season in 2014-15, and by NCAA rule he will be eligible to play for the Buccaneers this upcoming season after receiving his undergraduate degree from Cincinnati. ... during his junior season at Cincinnati, Guyn averaged 19 minutes a game, scoring 4.5 points and grabbing two rebounds a contest ... he averaged just one turnover a game during American Athletic Conference play that season ... Prior to his time with the Bearcats, Guyn was a standout high school and prep school player, averaging 16 points, six rebounds and nine assists per game while at South Kent Prep (Ky.) ... his high school years at Scott County were highlighted by the team’s state semifinal run in 2009-10. ... Following his prep career, Guyn ranked among the Top 50 shooting guards in the nation by Scout.com, while being listed as a three-star prospect by Scout.com and Rivals.com. Personal: Major is Sports Management … son of George and Rebecca Guyn … Nov. 24, 1990.