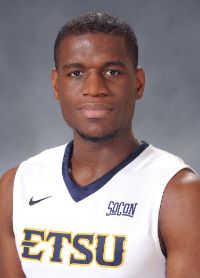 About Abednego: Provides a unique skill set for a player with his size and strength ... a great amount of versatility and passion for the game ... helps shore up the team's front court. Prior to ETSU: Played the past two seasons at Sheridan College located in Sheridan, Wyo., after having played previously at REDA Academy back in his home of Burlington, Ontario, Canada ... coming out of REDA Academy, Lufile was rated as the 16th-best player in Canada after averaging 27 points and 12 rebounds during his final prep season ... during his final season at Sheridan, Lufile averaged 12.3 points and 8.6 rebounds per game, shooting 58 percent from the floor while playing in 30 games and starting in 22 contests. During his freshman season, Lufile played in 32 games and averaged 9.3 points and 6.9 rebounds per contest, which included a season-high 23-point effort against Little Big Horn College. Personal: Major is Communications … son of Benjamin and Leonnie Lufile … June 8, 1994.