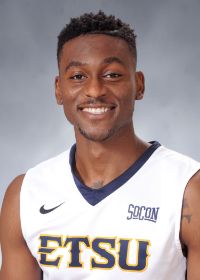 About Deuce: A highly touted prep star out of Westchester Country Day School, Bello was ranked as one of the nation’s top recruits coming out of high school. Prior to ETSU:  Bello averaged 10.9 minutes a game as a junior at Southeastern Conference member Missouri in 2014-15...Bello began his career at Baylor in 2011-12 and playing two seasons for the Bears, Bello sat out the 2013-14 season and played for Missouri as a redshirt junior last year, averaging 1.8 points and 1.1 rebounds per game...During his prep career at Westchester Couty Day, Bello averaged 19.3 points, 6.9 rebounds and 3.5 assists per game...Bello was rated as a four-star recruit by ESPN, Rivals.com and Scout.com. When he signed at Baylor, he was part of one of the nation’s top recruiting classes. Personal: Major is undecided … son of Ramon and Bummy Bello … born Sept. 19, 1992.